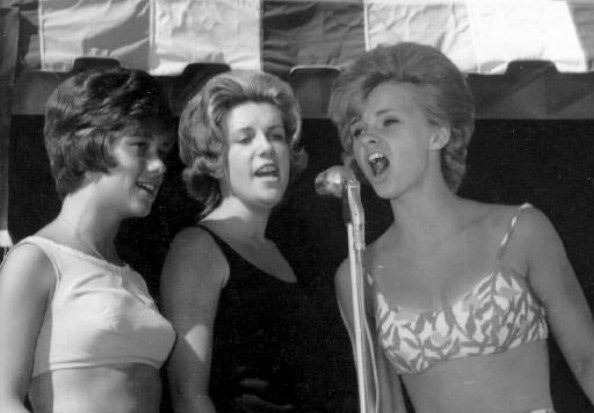 The Pixies Three at Grossingers

I didn’t often attend Friday night “Rec,” the biweekly dance held in the Multi-Purpose Room at Clara Barton Junior High School. I was a socially awkward 13-year-old—a redundant phrase if I ever heard one—and at that age, one or more of my friends were likely to be bar or bat mitzvah on a given Friday evening.

The drab, cavernous room reeked of sweat and hormones. Then the DJ mounted the steps to the stage.

But in early 1964, the Student Council was tirelessly promoting a particular Friday Rec through posters and announcements. And for good reason: It would feature a live appearance by a celebrated girl group, The Pixies Three. Fresh off their hit “Birthday Party,” the trio of Philadelphia high school students had recently released a new single, “442 Glenwood Avenue,” that was climbing the charts.

Why The Pixies Three would come to our little junior high school—and not, say, the high school, four times its size—still puzzles me. The appearance was sponsored, and also being promoted, by one of our local rock and roll radio stations as part of a tour through the Detroit area. Although I didn’t listen to these stations, preferring classical music and disdaining pop, I knew the Pixies from that endless series of bar and bat mitzvah parties.

So of course I showed up at Rec that night, along with virtually all of my schoolmates. It started out like any other Rec: dim lights, recorded music played too loud to converse, a few dancing couples, girls dancing together, boys hanging out on the periphery, mouthing the words while they tried to summon the courage to ask a girl to dance. The drab, cavernous room reeked of sweat and hormones. The chaperones tried to remain inconspicuous and kept a wary eye out for concealed flasks, cigarettes, uninvited guests, and couples that got too close.

After about an hour, a radio DJ climbed the steps to the small stage, took the microphone, and began his patter, mostly about his station, which apparently played more hits per hour than the competition. Finally, after a long build-up, he introduced … The Pixies Three! 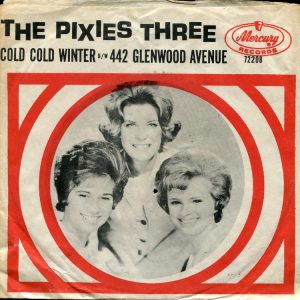 Music blasted from the speakers and the curtain opened on the three girls, all dolled up with big hair, lip-synching one of their hits. By now everyone had stopped dancing and crowded around the stage. The girls were just a few years older than we were, but they seemed incredibly glamorous and sophisticated. There was simple choreography to go with the singing, and I still remember how, in unison, they held up four, four, and two fingers to illustrate that famous address on Glenwood Avenue; and how they pantomimed knocking twice on the door, the signal for admittance.

They only sang three or four songs—presumably they had other appearances to get to—and we gave them a standing ovation. (Well, we were already standing, but we clapped long and hard.) Then they left, and the DJ left, and we were back to recorded music and sporadic dancing, just like any other Friday night. But we felt that we had been part of something very special.

I do remember one other group playing live at Friday night Rec, but it was just some 8th-grader who liked to sing and play the guitar, so he formed his own rock band. I had no fondness for him since he was going steady with a girl named Carol for whom I had nursed a crush since 6th grade. Not that I had actually expressed my affection to her in any way, or would know how to react if she reciprocated it. I couldn’t really blame Carol for choosing a cute, cool 8th-grader with his own rock band over a nerdy 7th-grade classical music snob.

I had to admit the band wasn’t bad, for a bunch of 8th-graders. But this kid was no rock star like the Pixies Three. He was wasting his teenage years strumming a guitar when he could be studying to get into a good college. What was his name again?

7 Responses to The Pixies Three