The Typewriter by John Zussman
50
(86 Stories)

Prompted By That Was Then, This Is Now
9 comments. 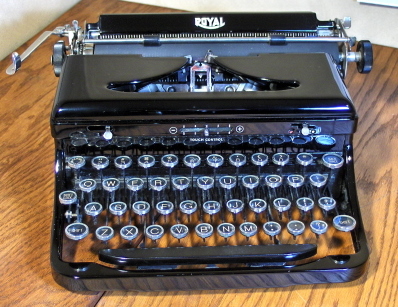 A year after I’d lost him, I taught myself to touch-type. I relished our old Royal, his old Royal. I loved how the keys plunked and the typebars clattered, how the letters appeared neatly on the line, one after the other. I reveled in the ping of the bell and the thwack of the carriage return. By the time I finished the lessons, it was not the typewriter’s music I craved but its lyrics: a powerful word, a deft sentence, a paragraph that leaves you breathless.

I loved how the keys plunked and the typebars clattered, the ping of the bell and the thwack of the carriage return.

Although I knew my father had written, I didn’t expect the thick envelope of manuscripts my mother presented me when I turned forty. From it spilled war stories and postwar stories, war poems and love poems, the first chapter of a novel. He’d dreamed of a life as a writer and, judging by his professors’ comments, showed promise. Then he joined my grandfather’s warehouse business so he could marry her and have me. He packed those pages away, planning, I suppose, to return to them when the business got to its feet and we kids could make our own way to school.

My manager and my writing mentor want me to write something commercial instead of another passion project. I see their point. But I conjure the smoky late-night staccato of my father at the Royal. No. I don’t think so.

John Zussman is a creative and corporate storyteller and a co-founder of Retrospect.

9 Responses to The Typewriter