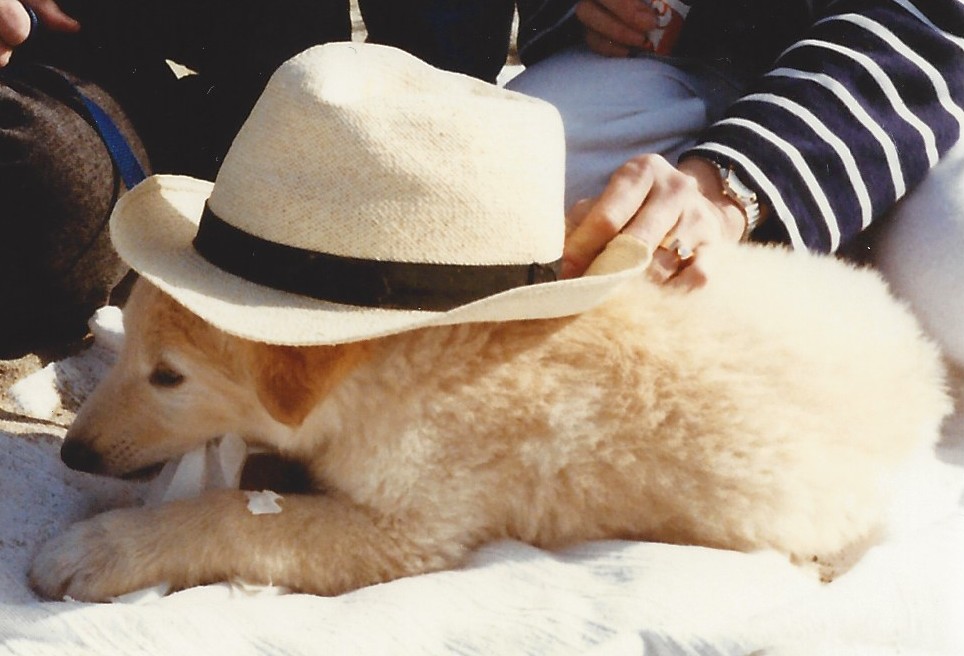 Truffle in an unusually calm moment at the beach.

We arrived at the county shelter just in time: the 8-week old puppy Patti had seen on TV, in one of those “adopt me” PSAs, was still available. A staff member escorted us to the cage in which she and her littermates were crawling over each other. They were all cute, a mix of golden retriever and German shepherd, but she was the cutest, a fluffy round ball of fur. She nuzzled us and gave us love nips with sharp little teeth. Yes, we said. She’s the one.

They were all cute, a mix of golden retriever and German shepherd, but she was the cutest, a fluffy round ball of fur.

As we began the paperwork to adopt her, another woman arrived to claim her. Sorry, we said, she’s ours. The woman was disappointed, but she understood. She gave us her card, just in case we changed our mind. No chance, we thought. We packed the puppy into Patti’s car and, while I drove back to work, she headed straight for the vet’s to get her checked out, and then to pet store to pick up all the gear we’d need as new doggy parents: puppy food and treats, food and water dishes, a leash, a bed, a cage, rawhide chews, and toys. That night, we named her Truffle.

We fell in love with her immediately. She had boundless energy and would chase balls, sticks, or anything else we threw. I’d take her for runs in the hills on which I could barely keep up with her as she sprinted up the trail, dragging me behind, desperately grasping the leash. We developed a game in which she’d race figure-eights around the furniture in the living room while I mock-chased her from the middle of the floor. She wanted to play continuously, invariably starting at five in the morning, when she’d bark and nuzzle us to wake us up. My parents, realizing that Truffle was the closest they would get to a grandchild from us, even sent us a “Welcome to the New Addition” card.

But Truffle had a dark side. Housetraining was problematic. At that time, Patti and I were singing in the San Francisco Symphony Chorus, which meant that one or two nights a week—five or six on performance weeks—we’d spend the evening in the city. We’d return home, tired, to the smell of urine and feces with which she’d soiled her crate. She liked to eat her feces, too, which meant we’d have to clean her up as well as her crate. She needed a fenced yard—the one thing we couldn’t give her, because we lived in a planned development where fences were prohibited.

She was also becoming aggressive. She’d bark and growl menacingly, and her love nips turned into painful bites. Unable to control her, we hired a trainer who came a couple of times a week. We started on simple commands, like Sit, Down, Heel, and (fat chance) Stay. The trainer was really training us, not Truffle. For example, she taught us that, when Truffle tried to bite, we should curl her lips around so she would actually bite her own gums. When we tried it, she yelped in pain. But it didn’t dissuade her. She kept biting. It was like she couldn’t help herself.

We kept at it. Truffle was smart—she learned the commands and complied when she felt like it—but her aggressive streak only grew. It was primarily directed toward Patti, who was home with her most of the day. The trainer said that, for some reason, Truffle needed to be the alpha dog, and had trouble being part of our pack.

Truffle was growing bigger and more aggressive day by day, and finally, after about two months, we realized that we couldn’t keep her. Patti remembered the woman we met at the shelter and gave her a call. No, the woman, said, she couldn’t take Truffle. She had adopted another puppy from the same litter who had some of the same problems, although not to the same degree. On questioning, the staff at the shelter had told her that the puppies’ mom had gone feral just before giving birth, and had raised them in the wild, without exposure to humans, until the shelter found them. Without that early exposure, they had a kind of socialization deficit. Truffle might never be able to fully accept us.

We began looking for a home for Truffle. Our friend Myrna, a nurse who sang with us in chorus, thought that Mark, another chorus member, might want a dog. He lived alone in the Oakland hills with a big fenced yard, backed up to open space where a dog could run. Sure, he said, I’ll come take a look.

A few days later, he drove to our house and spent about an hour. We were honest with him and didn’t sugarcoat the problems. Still, he liked Truffle and Truffle seemed to like him. Okay, he said, I’ll take her. And he opened up the back of his station wagon to load her in.

We were stunned. We thought Mark was only going to meet her and see if they hit it off. We didn’t realize that he was going to take her right then. But that’s what we wanted, right? Reluctantly, we hugged her and helped load her into the car.

That night, the house was quiet for the first time in months. We felt so empty. The next morning, we both woke up in tears. We sobbed and held each other close. And we understood that it’s the caring and nurturing that deepens your love for someone, instead of the other way around.

We called Myrna. We’ve made a huge mistake, we told her. Truffle is part of our family. We have to get her back.

Okay, she said. But there’s no rush. Take a few days and make sure this is what you want.

This was wise advice, it turned out. Over the next couple of days, heartbroken though we were, we realized it was for the best.

A few weeks later, we visited Mark and Truffle in the Oakland Hills. She jumped all over us in her excitement to see us again. She was still not fully socialized—he had renamed her Trouble in recognition—but she was in the environment she needed, and they were attached to each other. We said goodbye with moist eyes.

Someday I’d like to get another puppy. But in this case, the old saying, once bitten, twice shy, applies all too literally.