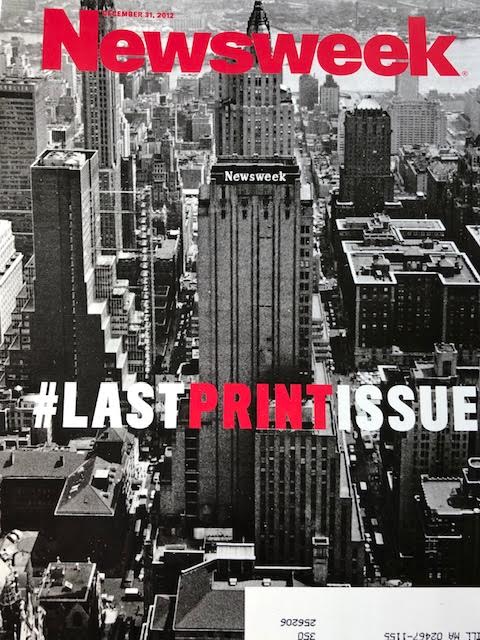 I first subscribed to Newsweek as an undergrad at Brandeis. It arrived in my mailbox on Tuesdays. Though I often took literature courses with heavy reading loads, I looked forward to Tuesday afternoons. Those I devoted to reading Newsweek. I’d come back to my dorm room after lunch, get comfy on my bed and settle in to learn of the world beyond the confines of campus in Waltham, MA. I didn’t stir until I’d finished the entire magazine.

Even after I married and went to work, I still tried to read Newsweek on Tuesday evenings. I enjoyed the columnists, featured just inside the cover. George Will, though I rarely agreed with his point of view, was, and  remains a marvelous and provocative writer. (I hope everyone has seen his current, shattering Washington Post op-ed on Trump.) John Meacham, who ran Newsweek for years, is a fantastic and interesting historian, now writing long-form books and frequently shows up on various talk-shows.

Fareed Zachariah, with his own program on CNN, I first encountered years ago in Newsweek. We belong to the same club on Martha’s Vineyard. I’ve seen him working out a few times. I even geeked out at him once. He is a small, slight man, smaller than one might think from his appearance on TV. I told him I thought he was the smartest man on TV and asked why he joined this club, as it is some distance from his home. He said his wife and son liked it; he couldn’t get to the Vineyard very often. I’ve left him in peace when I’ve seen him subsequently. One is supposed to respect celebrities on the Vineyard; give them their space. That is the “Vineyard way”. but seeing him reminds me of the glory years of Newsweek.

As with all forms of print, it struggled, eventually folded, came back in some stream-lined edition, but I think only Time survived as a weekly print news magazine without interruption.

We used to subscribed to SO many magazines: The New Yorker, Sports Illustrated, Boston Magazine, Runner’s World, Road and Track, Yachting, Architectural Digest, Interior Design, Entertainment Weekly, Forbes, Fortune, Car and Driver, Popular Science, Autoweek, Car and Driver, Unique Homes, Playboy, Golf Digest, Majesty, PC Week, Vineyard Magazine. You can tell a lot about our interests by that list and there are some stories embedded within. Most subscriptions have fallen by the wayside, or Dan subscribes to something that gives him access to a broad range on his iPad. Between writing for Retrospect and increasing eye difficulties, I find little time for reading, which makes me sad, but it is the truth. I read various interesting articles on-line (which is probably worse for my dry, failing eyesight). 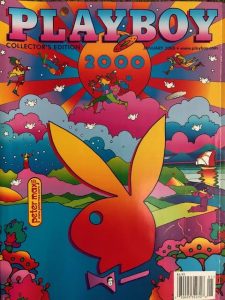 Shortly after graduating from Brandeis, before returning to Chicago to work for her father, Christie Hefner, my friend since the age of 12, moved to Boston for a year. Though I worked full-time and she was a free-lance writer, we saw a lot each other. We had dinner together at least twice a week (yes, I even cooked in those days; she is a fabulous cook and hostess).

It was my first year of marriage and I looked around for a good Chanukkah present for my new husband. She suggested a subscription to Playboy. I liked that idea. She got me the card to send in, very early, to make it a gift. Right on time, in early December, an unmarked hand-written card arrived for Dan. He opened it. It had the famous rabbit’s head logo on the front and inside was a nice note, informing him of his gift subscription, signed in handwritten ink from “Betsy”, but not MY handwriting. To be fair, I had sent away for it so long ago, I had forgotten and couldn’t figure out who this other “Betsy” was, sending my husband a gift subscription to Playboy. It took me some time to figure out that the note was from ME! We both enjoyed the magazine for years (the excellent articles and the photos).

In fact, I learned in the early ’90s, that a cousin (from a part of my mother’s family with whom my grandparents had feuded…no one remembers why, only that I grew up not knowing them), was now the publisher, being the first ever to bear that title after Hef. I heard wonderful things about him from Christie, so, on a whim, while visiting NYC in 1992, I called his secretary and left a message that I’d like to meet him (he’d heard about me from Christie too). We met for drinks at the Waldorf, had a FANTASTIC time and became great friends. He is two months younger than I am. He suggested I contact a cousin here in the Boston area (who grew up a few blocks from me, is a year older, went to the same high school, but we were not allowed to be friends). I did and we are now also great friends; a real win-win. I do not believe in family feuds! 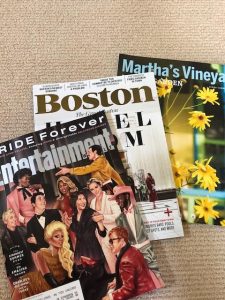 Besides the magazines from our various alma maters, we still get the above ‘zines. Entertainment Weekly is no longer a weekly, but now publishes only monthly. It used to have interesting articles, good movie and TV reviews and be good to read at the beach. Now, because of the format, it is barely useful. The others are quick reads. It seems few people read anything not digital these days. 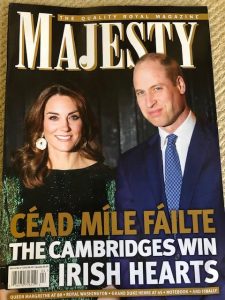 Bell Canada in Montreal was a client of mine in the early 1980s. I first found Majesty magazine in the Montreal airport as I waited for a flight back to Boston. I have followed the British monarchy my entire life. I have the Life magazine from Elizabeth II’s coronation. I was 6 months old at the time, so I must assume I inherited this fascination from my mother. 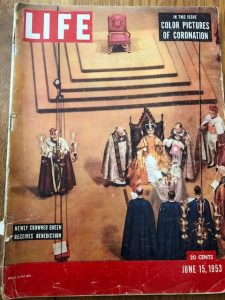 I read my first biography of the current queen, “Elizabeth Enters” in second grade during Library period at my elementary school. The Tudor dynasty is my favorite, and though there are a lot of movies and TV shows, of varying degrees of quality, made about that period, I have not found popular magazines devoted to that subject. This magazine (unlike Royalty, which covers ALL monarchies, holding little interest for me), used to run series on the history of the monarchs, as well as current goings-ons. It is relentlessly up-beat. Not a word about “MegExit”, the retreat of Harry and Meghan from their royal positions. I have subscribed for about 36 years and seen a decline in the quality of the magazine, just as the family itself has become less interesting, but yet, I continue to get it, though I hardly look at it these days.  No doubt, Kate is the rising star and has had several covers over the past 12 months. The royal family needs an infusion of good news and charisma. They continue to carry on their charity work and ceremonial duties. We will see what the future holds for them and this magazine.

All forms of print media are struggling as digital is increasingly the place where, for better or worse, everyone turns to get their information, vetted or not. It becomes increasingly important that, even on-line, we look at the source of the information to sort out what and whom to trust in this era of information overload, deep fakes and spoofs. I still like the form factor of print. But then, I’m OLD!

16 Responses to Tuesday Was Newsweek Day