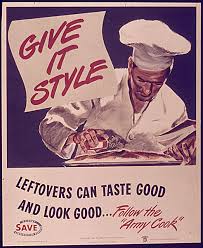 My mom would rise extra early each day for some quiet time, and then face the for-her-daunting task of packing dad’s lunch.  She really wanted to provide healthy things.  And his job was so routine, that something fun was always a welcome discovery in his lunchbox.  But she was also raised during the depression and hated waste, particularly food waste.  Poor dad, some days he got the sandwich filled with ground up meat from previous dinners bound together with mayonnaise.  Not fun.  Not particularly healthy I suppose.

She was also raised during the depression and hated waste, particularly food waste.

I think mom was the first person in the neighborhood to get a microwave.  Glory!  The answer to prayers for someone averse to wasting leftovers.  You could trace their progression.  Full serving of fresh (okay, canned) vegetables the first night.  Reheated leftovers the second night.  But not completely consumed, so into a little tupperware container and back into the fridge they went.  Third (or fourth?) night, two dabs of three or four different mystery meats and vegetables would come out of the microwave in series, graying with age after succumbing to all those zaps.

Eventually we would either eat the last bit of whatever was left over, or she would concede defeat and scrape a final spoonful into the compost bin.