Prompted By The American Dream
7 comments. 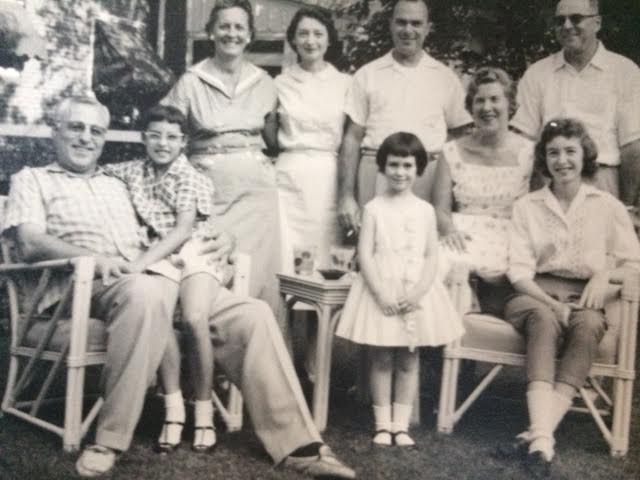 My maternal grandparents came to this country from Bialystock, Russia in 1906 to escape the pogroms. They raised four children, my grandfather ran a successful jewelry business in Toledo, OH, were free to worship as they pleased and found prosperity in the heartland of America. One could say they lived the American Dream.

Two of my grandfather’s sisters did not leave Russia. After WWI, that area of Eastern Europe became part of Poland and that part of the family perished in the Holocaust except for one niece. That niece, Paula, my mother’s first cousin, married a Zionist. They escaped overland making their way to Palestine, arriving in 1939. During the two years my brother spent in Israel, while studying for the rabbinate, he found Paula and her husband and family. She looked a lot like my mother. I visited during the summer of 1972. When I walked in the door of their Ramat Aviv apartment, with my long hair braided and criss-crossed across my head, Paula drew in her breath. She said I looked like her dead sister, Eshkie. Her words still give me chills. We will never forget!

My paternal grandparents came from Kovno, Lithuania, separately in the late 1800s. My grandfather was a back-peddlar with a territory that included St. Louis, Conway, AR and Greenville, MS. One of his sisters ran a boarding house in St. Louis. While home once he met the dark-haired beauty he would marry; my grandmother Lizzie. They went on to have eight children, but Lizzie was bipolar. She had the last two, including my father, her youngest child, to “cure her” because she was more stable when flooded with pregnancy hormones. My grandfather eventually opened a general store in St. Louis and prospered, but Lizzie needed to be institutionalized when my father was 12. One of his sisters came home from college to care for the younger children.

Lizzie’s younger brother, however, had a head for numbers. He gave a financial report without notes at the gas company in St. Louis in front of important businessmen. One was so impressed that he invited Uncle Meyer to move to Detroit and join this two-year-old company called General Motors in 1911. Meyer Prentis rose to become Treasurer, a position he held for 32 years. That is the American Dream.

My dad and most of his siblings moved to Detroit and worked at GM at some point in their lives. My dad worked for Chevrolet in Flint, MI in 1937 before WWII. But when he returned from the war, with a partner he bought a used car lot, which became a DeSoto (really) dealership, then a Chrysler dealership. The featured photo was taken in July of 1957. I am the little girl with the Dutch boy haircut in front. I am 4 1/2 years old. My dad is in the middle of the back row behind me, one of his brothers is seated on the left, another, with sun glasses, is standing on the right. He had set up the shot on a timer. We Sarasons love our family photos. He was assistant comptroller of GM. We were living the American Dream.

Several of my dad’s brothers did not marry Jewish women. One converted to Southern Baptist to marry his wife. Both his surviving daughters married Baptist ministers. This uncle was a brilliant actuary but had inherited his mother’s chemical imbalance. He was severely bipolar and needed hospitalization at various points in his life. His wife developed MS and his eldest daughter was born with Cerebal palsy. She died before I was born. Christmas presents came from their Jewish aunts, who were always involved. When my grandfather died, he had cut this son out of his will, since he had left our religion. But the brothers and sisters had a family meeting and voted to overrule their father’s wishes and give their needy brother his share of the estate. If only we could look at that as an example for this era. Doesn’t this example of family love, goodness and caring express an aspect of the American Dream? I fear for the loss of civility and care for the Family of Man in our civic discourse.

My father had financial set-backs, lost his business when my brother was half-way through college. He went to work for his cousin, working at his Buick dealership. From my perspective, that cousin saved my family. It was never discussed. It must have been hugely humiliating for him, but he never complained. Is this the American Dream?

In 1970, just as I entered college, my father became the first Director of Endowments for the Jewish Welfare Federation in Detroit. He told me in a private conversation one night before I left for school. He was excited to begin a new career. He said he would “do good and make good”. He set a charitable example for me when I was 17 years old. It made an impression on me. My parent’s marriage was crumbling, but my father always provided a sense of stability for me, both emotionally and in the way to lead your life. It may not have represented the Ozzie and Harriet picture we had from TV, but he was a man who overcame set-backs, kept smiling and moved forward. Perhaps he gave me a small slice of his American Dream. In retirement, after divorcing my mother, he settled in California, where he had wanted to live his whole adult life. That was his dream.

This week, we witnessed the unthinkable. A man hugely unqualified to lead the greatest nation on earth was elected on a platform of hate and lies. He tapped into a desperation many Americans feel, but also the darker side of prejudice and bigotry that has no place in a civilized society. I mourn for the progress that has been made from the New Deal, through the Great Society to the strides made by the Obama administration, despite constant obstruction. I have a transgender child and fear for her safety. Last week, in the building where I attended high school, though it is now a middle school, students started screaming, “Build the wall’, while Hispanics in the class cried. It was on the news and all over the Internet. When I attended 9th grade there, someone called me a kike. We were at a play rehearsal. I had to go ask my mother what the word meant before I could get angry at the 12th grader.

A friend once asked me where bigotry came from. I told him it is passed from parent to child, but Rodgers and Hammerstein said it well in “South Pacific” in the song “You’ve Got to be Carefully Taught”.

So how do we break this cycle of hatred, of distrust, of suspicion of “the other”? It certainly doesn’t begin by starting one’s political career by questioning the legitimacy of our first president of color, then moving on to racial slurs and inciting his frantic followers to express their deepest feelings of hatred toward non-whites, and immigrants, the “liberal media”, and demeaning women. I truly fear for the peace and well-being of the dream of the greater good with the alt-right ascending and hate having its day. The American Dream lies, shattered at the moment. Lady Liberty, whose poem was written by Jewish poet Emma Lazarus states: “Give me your tired, your poor/ Your huddled masses, yearning to breathe free”. She is weeping right now.

7 Responses to Where Did the Dream Go?