Where Have All the Hitchhikers Gone? by walter
5
(8 Stories) 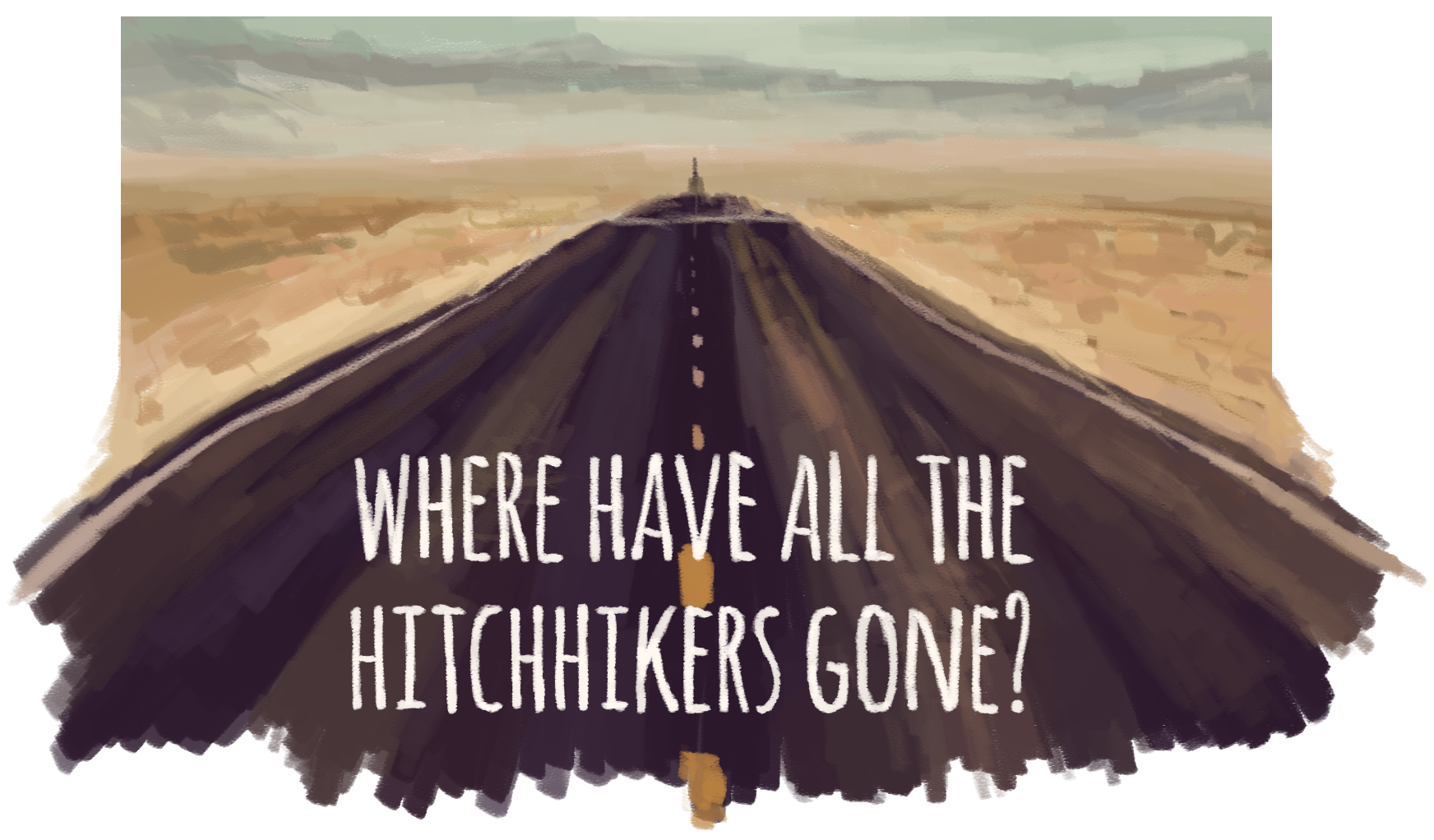 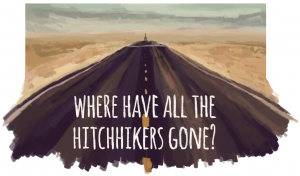 Are they hiding, like stars no longer visible in the light-polluted sky? Or are they simply no longer here, gone forever, like the passenger pigeon or Good Lord Bird? What I hope to spot is another elusive species, rare and endangered, maybe even extinct. I feel like a frustrated sky-watcher or avid birder, constantly on the lookout, from back roads to Interstate exit ramps; but I haven’t found a one. Not one. Not a single hitchhiker.

The question, of course, betrays my age. Anyone younger than aging Boomers hardly cares. Like my children and their friends, who greet my puzzlement with polite indifference. Or like my younger colleagues, who look at me as if I’m crazy when I ask if they’ve ever hitchhiked.

But once upon a time, hitchhikers were everywhere — and everybody: Not only students like myself, who hitched for the pure thrill of it and the rite of passage it conferred. But also, of course, migrants looking for work, in the tradition of the Depression-era hobos. And adventurers of all ages and socioeconomic classes, following their hearts in the romance of the open road. Not to mention supposed axe-murderers, sexual predators, and serial killers, stories about whom comprised the currency we hitchhikers traded: something to brag about, raw experience for its own sake, badges of courage, eliciting both shudders and laughter, fear and delight. Of course, we never shared these stories with our parents.

“When you ride alone, you ride with Hitler!” During the gas rationing days of World War II, government propaganda actually encouraged hitchhiking. And such was the free-ride, open-road culture back then that the “Miss Manners” of the time, Emily Post, addressed the proper etiquette of bumming rides in her advice columns. Not until the early 1970’s did the culture start to change.

So what happened? Where did all the hitchhikers go? Where have all the cowboys gone?

Any guy over the age of, say, 55, when asked about hitchhiking, will smile; his eyes might even twinkle; then tales will be told. Take Ralph Nader, for a random, seemingly unlikely, and thus fairly typical example: “You met all kinds of people,” Nader said of this formative experience. “Executives would pick me up, tree surgeons, bricklayers, doctors, truck drivers. Not only did I learn a lot…but you had to adapt to all kinds of personalities. And, remember, you were helping people, too. Some of the drivers would pick you up because they were sleepy and you would keep them awake just by talking to them.”

Hitchhiking, unlike just about any other human activity (with the possible exception of fly-fishing), combined the practical with the poetic. It was easy, cheap transportation — and no less reliable than getting around in today’s world of flight delights and traffic jams. More importantly, it was a metaphor: not simply words on a page or some other kind of dry abstraction, but a trope you could actually live and breathe. And that trope was this: freedom, absolute, total freedom, and a landscape of unlimited horizons — what America was supposedly all about. Go where you wanta go, do what you wanta do.

As with most things long gone, appreciation is most finely honed in retrospect. Without hitchhiking, I would have never known, never connected with the deaf-mute, the long-haul trucker, and countless others. And I at least would have been the poorer. The all-male, mostly white college I would attend that fall wasn’t yet “enriched by diversity,” but hitchhiking was. The people I met hitchhiking were like rare books that I otherwise would never been allowed to take down from the library shelf.

And more: An invisible, unwritten contract was drawn with people you had not yet but were destined to meet. When you were driving a car yourself, it was payback time, so you picked up other hitchhikers. It was a moral obligation, and trust was the currency you traded.

Tocqueville, that 19th-century road-tripper, would have no doubt been pleased. It was community spirit like this, coupled with the coexisting yet contrary impulse toward rugged individualism, which made the American character unique. So if the cocoon-like automobile represented one side of the American character — vanity-plate individualism to the point of isolation — then Americans’ other side was expressed in hitchhiking.

Were Tocqueville to be reincarnated today, he’d likely be a social scientist into quantitative analysis — — seems plausible, right? And so he could hatch a brand new quality of life (QOL) index, which the U.S. Highway Administration might call VMTH — Vehicle Miles Traveled Hitchhiking. That measurement might be just as valid as the so-called Popsicle Index, Broken Window Theory, Gross National Happiness, or Physical Quality of Life Index (PQLI) — all designed to provide more nuanced meaning to the Standard of Living as Per Capital GDP.

With the VMTH now hovering close to a statistical zero, we Americans, each and every one of us, are all “bowling alone.” At the turn of the 21st Century, that popularized conceit made another social scientist, Robert Putnam, famous. Bowling alone, riding alone. They sound the same.

Long before 9/11 and the War on Terror, we became terrified of hitchhikers — that is, terrified of ourselves. Like prohibited items at airport security, hitchhiking can even be against the law in some places now. Not that such laws are needed for drivers who keep their windows rolled up, feet heavy on the accelerator, and eyes straight ahead (except when rubbernecking).

Like the Interstate highways, designed to connect us, the Internet’s instantaneous communication has seemed only to drive us further apart. Fear and mistrust is the climate we’ve grown acclimated to. Political extremists and special interests are fearful of compromise; elected representatives, fearful of their retaliation. Where we live is increasingly self-segregated, ideologically and economically. With our gated-community mentality, fellow Americans become scary strangers; and people standing with thumbs outstretched by the side of the road are the scariest and — given their scarcity — the strangest.
***

A retired journalist and publisher, the author can be reached at walter@rappnews.com

8 Responses to Where Have All the Hitchhikers Gone?