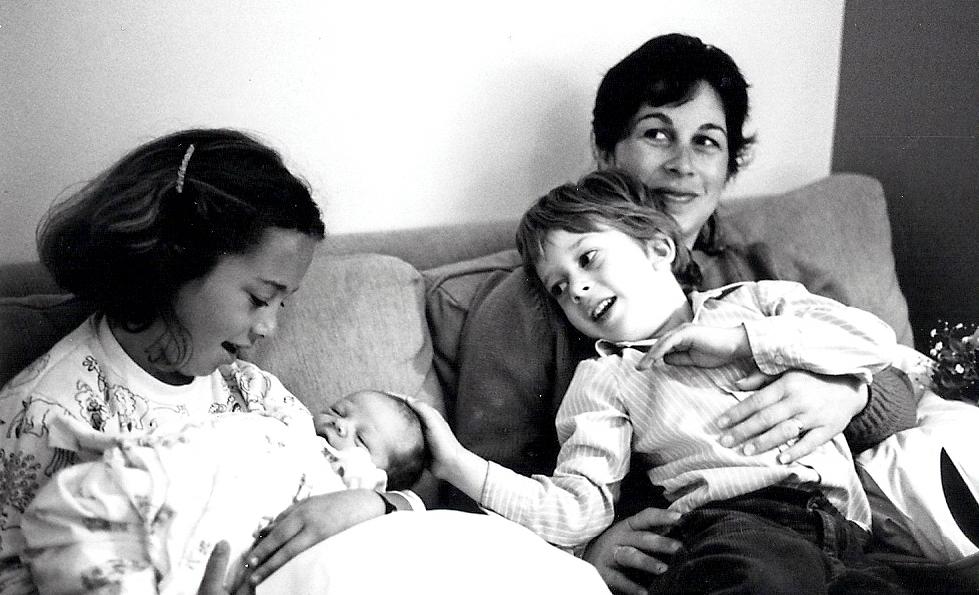 “But where’s MY baby book?” I asked  my mother when I was a little girl. She was vague and evasive and said it was “around here somewhere,” but I never saw it. My suspicions were  confirmed after my parents died and my older sister and I went through the house. She had a baby book, filled with pictures and notes about her first foods, her first words, her first step, etc. The details of my sister’s infancy, carefully noted in my mother’s cramped and nearly flat-line handwriting, told a story of a cherished and doted-upon baby girl. Pictures of her in the bath, smiling in her stroller, sitting in her high chair, in her grandmother’s arms, on and on. Little black and white photos that marked every single new thing, every adorable expression.

When I was an adult, I found a little blue booklet with a few pages of notes written by my mother. She had filled in my name, my date of birth, weight, doctor's name, and a list of which shots I was given and when, with a reference to how much and what kind of formula I was fed. End of story.

When I was an adult, I found a little blue booklet with a few pages of notes written by my mother. She had filled in my name, my date of birth, weight, doctor’s name, and a list of which shots I was given and when, with a reference to how much and what kind of formula I was fed. End of story. No pictures of a smiling baby in the bath or with a cute little dab of baby food on her nose or chin. There are only a few pictures of me as a baby, even. 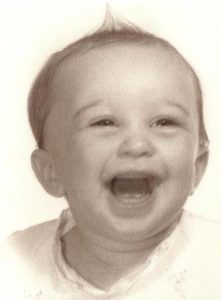 I have to be honest: I felt cheated. When did I sit up? What was my first word? These critical benchmarks remain a mystery, and it makes me a little sad to this day that being a second child (and a second daughter at that) meant my earliest accomplishments weren’t noteworthy. My takeaway from this (not that I’m bitter–well, maybe a little) was a determination to keep baby books for my children–if and when I ever had any.

And so I did. I recorded each and every milestone for my three children. My daughter, who spent 4 months in the Intensive Care Nursery, got a scrapbook in addition to her baby book, where I filed away the cards she received during her hospital stay–cards that had been taped to the inside of her isolette: Valentine’s Day through Easter. Her birth announcement, complete with a quote from e.e.cummings, went in the scrapbook. In her baby book, I wrote down all the gifts she received for each subsequent birthday and holiday. Every new development got inscribed in the book. Weight and height at each checkup, new foods, each new tooth, who came to her birthday parties and what we did. Halloween costumes, favorite books and activities. So much detail.

When my first son was born, he got the same baby book treatment: birth announcement (with another quote from e.e.cummings), and the wonderful story of how he was born. . .ten days late. I loved filling out that book, noting the way he loved hats from the very beginning. His first word was “dutton,” and we never did figure out what it meant. It was an all-purpose word, like aloha or shalom. I listed all the baby gifts he received (lots of Lacoste stuff with the little crocodile, very big in 1980). I filled out the book until he turned seven, I think, because that was as many birthdays as it would accommodate.

And what about my third child, my second son? He had two baby books! I got both as gifts, and because they had different categories and suggestions, I filled them both out. I saved the little golden curl from the nape of his neck when I cut his hair for the first time and put it in one of the books. I kept a running list of his new words, which grew longer by the day. My sister and her camera were present during his birth, so I have pre-and post photos of his long-awaited arrival. I made a note of my first words to him, after many hours of labor: “He’d better love me all his life!”

When my family evacuated ahead of the catastrophic firestorm that destroyed our neighborhood in 1991, I grabbed the baby books and the scrapbook and all the albums we’d filled with pictures from the time my husband and I first started dating–when we were seventeen. At some point, several years ago, I gave the kids their baby books. Now, if and when they care to, they can read about themselves and see what amazing little creatures they were–and find out when they got the chicken pox, when they started potty training, and what made them happiest .

I loved keeping those books up to date. It’s a chronicle of who my children were as they grew, but it’s also a record of who I was as a young mother. Those memories are theirs and mine both: the details of their childhood through the eyes of a mother who wanted to preserve and savor every important step along the way.

8 Responses to Who Wrote the Book of Love?