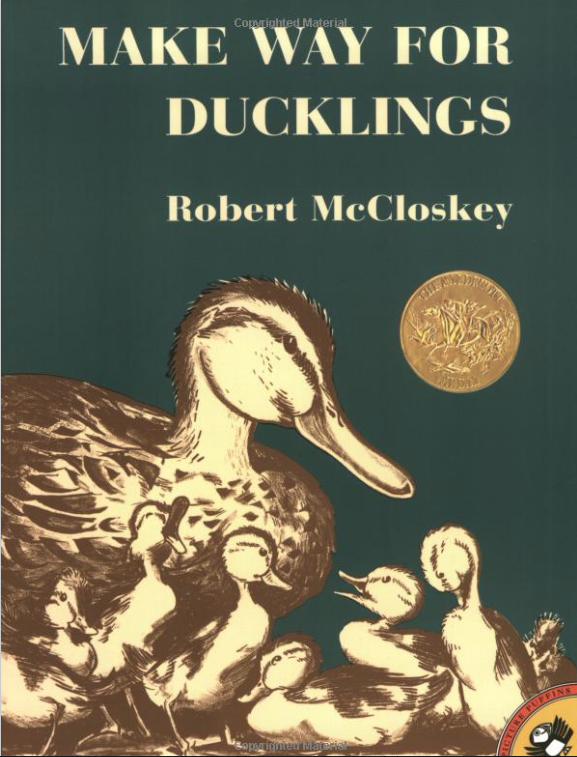 Before my children were born, they each received the classic Boston tale, “Make Way For Ducklings” as a gift. The book is so popular that in May, there is a Ducking Parade, (children dress up as ducklings) and retrace part of the duckling’s route through Beacon Hill to the safety of the Public Garden. Years ago, local sculptor Nancy Schön crafted the image of the Mother Duck leading her ducklings into the Public Garden. It is a major tourist attraction (and people dress them in suitable gear in cold weather, if a Boston sports team wins a championship, etc). and for children to come sit on. 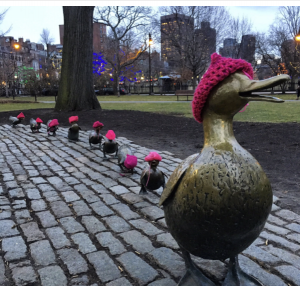 During the Women’s March

During Glastnost Barbara Bush presented a copy of the sculpture to Raisa Gorbacheva for the children of Russia. Both my children took their copies with them. 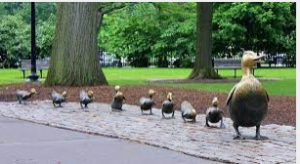 David and Anna are having a baby in December. When they visited in June, they took some of his favorite books, and I already bought some smaller editions in cardboard for them to have while the baby teeths. Reading is a wonderful way to bond with the baby, increase vocabulary, while away the time, and stimulate interest. Of course the Eric Carle books are delightful. We always loved “Chicka-Chicka Boom Boom”, both for the bright colors and the great rhythm of the words. We read that over and over again. David took those, so I only have a small sample, taken at the local book store (yes, we still have book stores on Martha’s Vineyard). Even “Curious George”, who had his own store in Harvard Square (alas, I think he lost his lease), was great fun. And of course, I loved Babar as a child and read his adventures to my own children. The Golden Books were always winners. David named his cat Kate because he had a Golden Book: Katie the Kitten (it is now in Vicki’s scrape book of photos that I put together when that beloved cat died). I just bought a Golden Book for my first grandchild at the grocery store the other day. 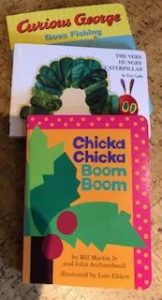 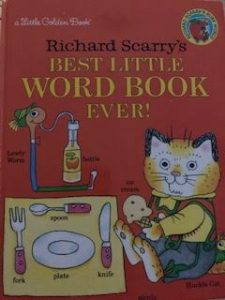 I discuss my love of reading and some of my favorite books in a long-ago story: Girl Stories. Though some of the books I read as a child might be considered “girl” stories, I read them to my own children too, who always enjoyed them. Each has a specific memory for me. 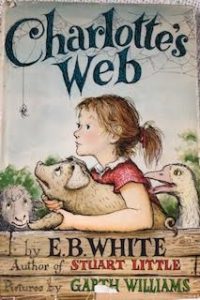 My second grade teacher, Mrs. Zeve read this aloud to us in class, doing different voices for each character (she had been a “radio” major at Michigan State). The characters came alive. She inspired me, a VERY shy little person, to also be interested in theater (that’s really what she was doing). She encouraged me in all sorts of ways, became a beloved mentor and we stayed in close touch until her death from cancer, aged 42, my senior year in high school. I have never seen the movie. I will not spoil the memory of her voice in my head, playing all the roles. 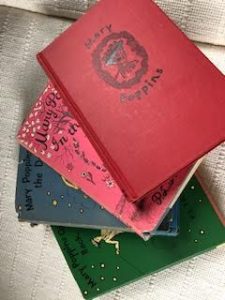 The Mary Poppins books were pure magic. I discovered volumes one and three on a shelf in my mother’s bedroom. The had been passed down from my cousin Lois, my oldest maternal cousin. I was in, perhaps 3rd or 4rd grade when I devoured them. By reading them, I discovered there were two more referenced in the front, which I purchased and also delighted in the tart, magical nanny. The Disney movies prettified her. She is not all that likable, but everything always works out and the adventures are fantastic. 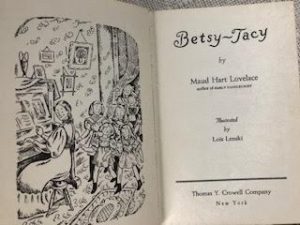 Betsy-Tacy is a very old series of books. This one was a hand-me-down from my next-door neighbor, Lisbeth, seven years my senior and a role model for me. I found she had practiced her handwriting on an inside page when I looked through this book some years ago. I was able to find her in Berkeley, CA, took a copy of the page and got in touch. We’ve been in touch ever since. I loved the quaint story about a new girl in the neighborhood in the late 1800’s who becomes Betsy’s best friend and all the adventures they have. I read this to Jeffrey, who also found the book so interesting, that he noticed there were others in the series. We went to the Newton Library. There were LOTS more in the series. We read them all. 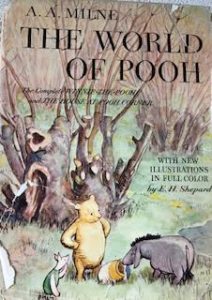 Of course Winnie-the-Pooh is a classic for all generations. I read it as a child, I read it to my children, but my favorite memory of it (beyond the Disney version of it) was at camp in 1966 with my favorite counselor, Grundy. We sort of thought Grundy looked like Pooh, but never mind that. She would read a chapter of the book to us at night after Taps (lights out), doing different voices for each character. Unlike Mrs. Zeve, Grundy was not a theater person, but she did have a talent for this and we were riveted (we were 13 years old at the time). So whenever I think about Pooh and his friends, I think about my dear Grundy (who we learned when I posted the story about her that she died recently). 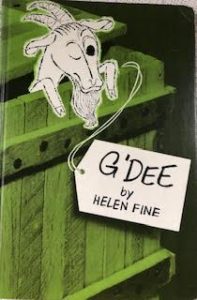 G’Dee is entirely different. It is a Jewish-themed book about a goat (G’Dee evidently means goat in Hebrew). The author, Helen Fine, came to Detroit to promote her book and I had an autographed copy that I bought at the very first Jewish book fair, founded and run by my Aunt Pauline (Dad’s oldest sister). She was quite a woman! I must have been about 7 at the time. The book takes place in Brookline, MA (a place I did not know at the time) and each chapter is about a Jewish festival. The protagonists are young twins Deborah and David, who receive this goat as a gift from an uncle in Israel. They always get into mischief, but it all resolves well, and each chapter explains (in a delightful way) the meaning of that Jewish holiday. I enjoyed it, but gave my signed copy away when I grew up and left Detroit. When my children came along, I missed it. I now lived near Brookline, learned that Helen Fine wrote it from stories she told to her Sunday School class at Temple Israel, a place I had come to know well and I wanted another copy. The book was out of print. I went to the Brandeis Book Stall (they used to have a used book store in Brookline – the books were sold to benefit the Brandeis library) and I found a copy; we all delighted in these stories.

Now I have a grandchild on the way. I went on Amazon last week. There was one copy. I scooped it up, so the next generation can learn about Jewish customs in a fun way from a mischievous goat from Israel who comes to live with a family not far from where her grandparents reside. L’dor v dor…from generation to generation.

23 Responses to With a Baby on the Way