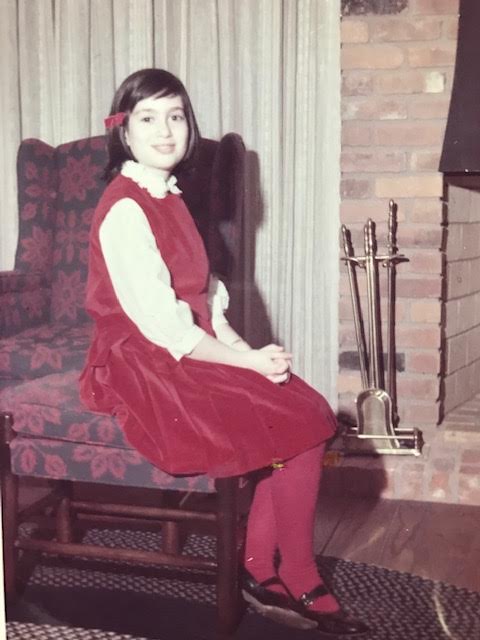 My mother was still in a deep depression, too tranqed out on Miltowns to take care of me, much less plan a birthday party. Dad owned a car dealership; worked six days and two nights a week. He cared but just wasn’t there. We had been in the neighborhood 2 1/2 months and I didn’t have any friends except for the Pearlmans, two doors down. Ralph was my age and we were friendly, but boys and girls didn’t really socialize in 6th grade. I played a bit with his younger sister Nancy. Still in 4th grade, that was too big an age difference to consider being close friends. Yet, I was frequently sent over to their house, as my mother couldn’t deal with me.

Aunt Stella, mother’s sister from Cleveland had come in to care for my brother and me, as mother spent most of her time in bed. Stella and I would clash over my clothing choices. I noticed that the girls in my school no longer wore tights. They now wore knee socks. I was fighting for psychic survival and demanded to wear them too. She called me a spoiled brat and said knee socks weren’t warm enough in winter. She just didn’t understand.

My 11th birthday was December 10, 1963. Mother’s oldest sister, my Aunt Ann, lived in greater Detroit. She was very busy with her clubs and social life. She decided what sort of birthday party I should have. Having something at the house was out of the question and evidently I was too old for something with entertainment. So she decided on a luncheon at her city club, the Great Lakes Club, for me and a few girls from my class at school. Some had been generous and their mothers had me to their home for lunch during the month after the semester started but before our house (which we built) was finished and we moved in on October 1. Others were the queen bees of 6th grade society. So I’m sure Sara, Ruth, Kitty, and Julie were there.

The Featured photo shows me dressed for the luncheon. You can see the bad hair cut, pulled back with the little bow. Well-scrubbed face, before braces. I always took off my glasses for photos, but put cat’s eye glasses on for full effect. I liked my red velvet outfit, but it was hopelessly immature compared to what the other girls wore. And those dreaded tights and MaryJane shoes. I still look like a little girl, which I was. Due to overcrowding in the Detroit schools, I was only half-way through 5th grade in June, and skipped ahead, so was the youngest in my class. When I look at the 6th grade class photos, the other girls look so much more mature. Their mothers groomed them to be. My mother was in bed, oblivious to the world around her.

The other girls arrived at the Great Lakes Club and were greeted by my aunt, who was a superb hostess and knew how to make people feel at ease and carry on conversation. We were all seated at a round table and the girls chatted easily with one another and with my aunt. AND NO ONE SAID A WORD TO ME. DURING THE ENTIRE LUNCHEON. The party remains memorable to this day for that intractable sense of loneliness and isolation. The others didn’t even have good enough manners to pretend to care that the party was for me, the birthday girl. They totally ignored me. I was crushed and came away bitter from the entire experience. I don’t think I commented on it to my aunt. I thanked her for giving me such a nice luncheon. I knew she tried to make up to me what was missing in my life, but this wasn’t it.

So who betrayed me? The girls who couldn’t even pretend to be my friends for a few hours that Saturday afternoon? My mother’s mental health? Each of my aunts for failing to recognize how miserable I was and connect with that in any meaningful way? In some ways, all of the above, though I don’t blame my aunts, as they tried to do what they could to help out a lousy situation. And the mental health profession has come a long since 1963. Perhaps I betrayed myself for not being stronger and able to care for myself. I was a terribly shy, sensitive kid.

Now I fear that social media has made forms of bullying and isolating the less popular girls even more prevalent. The stories of girls who commit suicide because of social media pressure are everywhere. I wonder how I would have survived had I come of age in this era. People mature at vastly different rates. They don’t deserve to be mocked or isolated for that, but those are difficult lessons to learn when one is in the midst of it. It DOES get better, but it can be excruciating to live through, particularly without a strong mother figure or a few good friends.

I did make a friend that year. She and I would be friends for the rest of my years in the Royal Oak school system, but she wasn’t at that luncheon. By 8th grade I had a few friends and once into high school, the world opened up. It really did get better. I just had to hang on and live through it.

I spent a lifetime working to excel to attract praise, only now realizing that it is a substitute for the love and affection, which I so craved. The deep wounds healed, but I will always bear the scars.