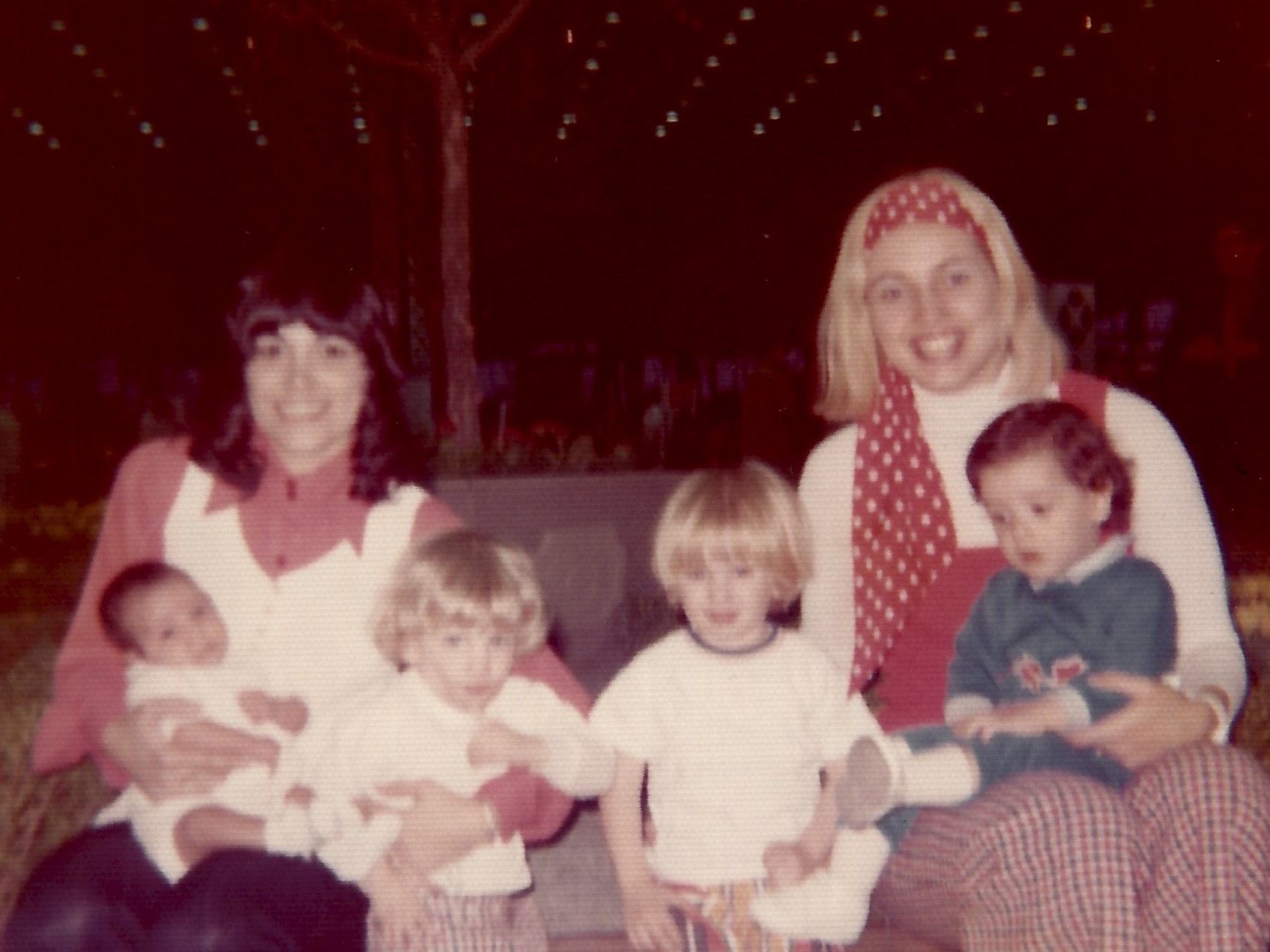 Written April, 2015 for my book Terribly Strange and Wonderfully Real**

What is it about a friendship that stays with you forever, even when your communication is reduced to an annual letter and a few emails and phone calls?

I only receive one Christmas letter in recent years, and it generally arrives sometime in January. My friend still hand-writes her annual note (her fingers are not as arthritic as mine, I guess). It’s several pages of blue ink on real stationery that’s crammed full of things I want to know: the health of her husband, the latest project she is working on, what her three sons are doing, and cute anecdotes about her grandkids. I write back, remembering how important she was to me and filled with nostalgia for our brief but intense friendship. In our annual letters, we resolve to stay in touch, but we both know that another year will fly by without much communication. Since she moved away from the Chicago area in 1975, we have only seen each other a few times and have spoken by phone and emailed infrequently. And yet, the love we shared has somehow stayed intact. 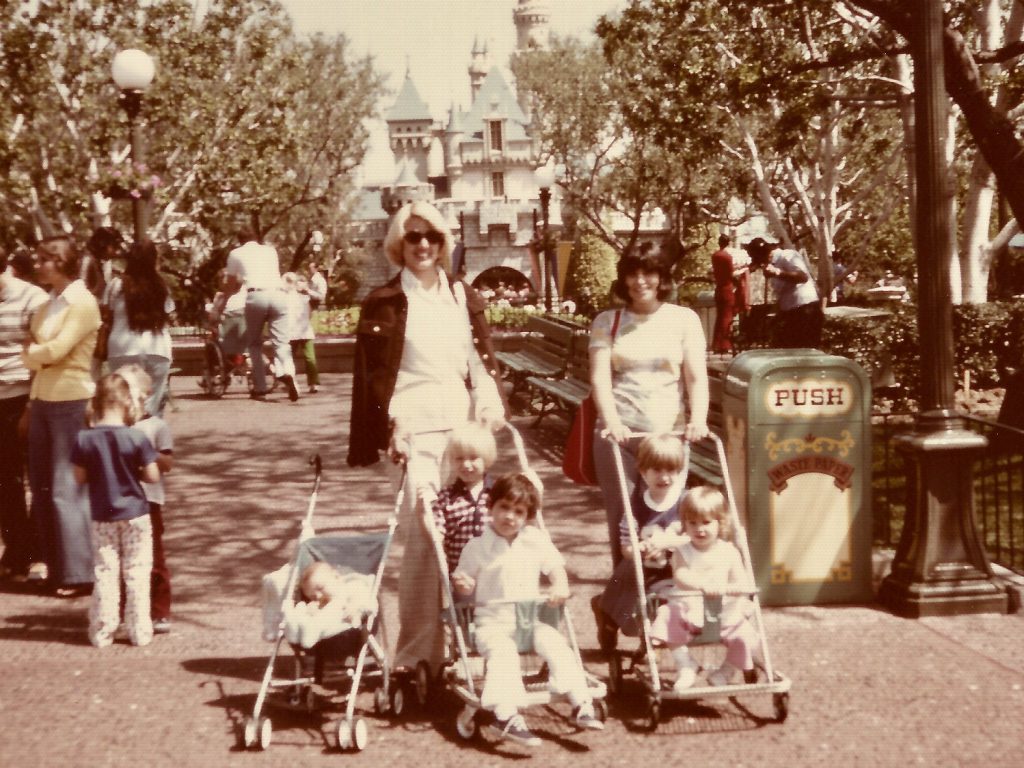 1975 get together with Connie’s family at Disney

What is it about a friendship that stays with you forever, even when your communication is reduced to an annual letter and a few emails and phone calls?

I used to hate receiving annual Christmas letters from folks who sent them to brag about everything they and their kids had accomplished. Facebook killed these letters. Now people can subtly brag year-round. You know what I mean. The post generally says something like, “What a huge expense taking Caden to Barnes & Noble every week to get a new supply of books. He reads them so quickly (way above grade level!).” In case you skip over these kinds of posts rather than “liking” them, you can see the short version in the “Year in Review” Facebook creates for its users. So, no, I don’t miss this kind of Christmas letter at all. But I start checking the mail in early January, looking for the letter I would miss like crazy if it didn’t arrive by the end of the month. When I see that fat blue envelope with her return address in the corner, my day becomes something special. I read it several times and then rush to my computer to reply. It feels like receiving a love letter, and in a way that’s what it is. 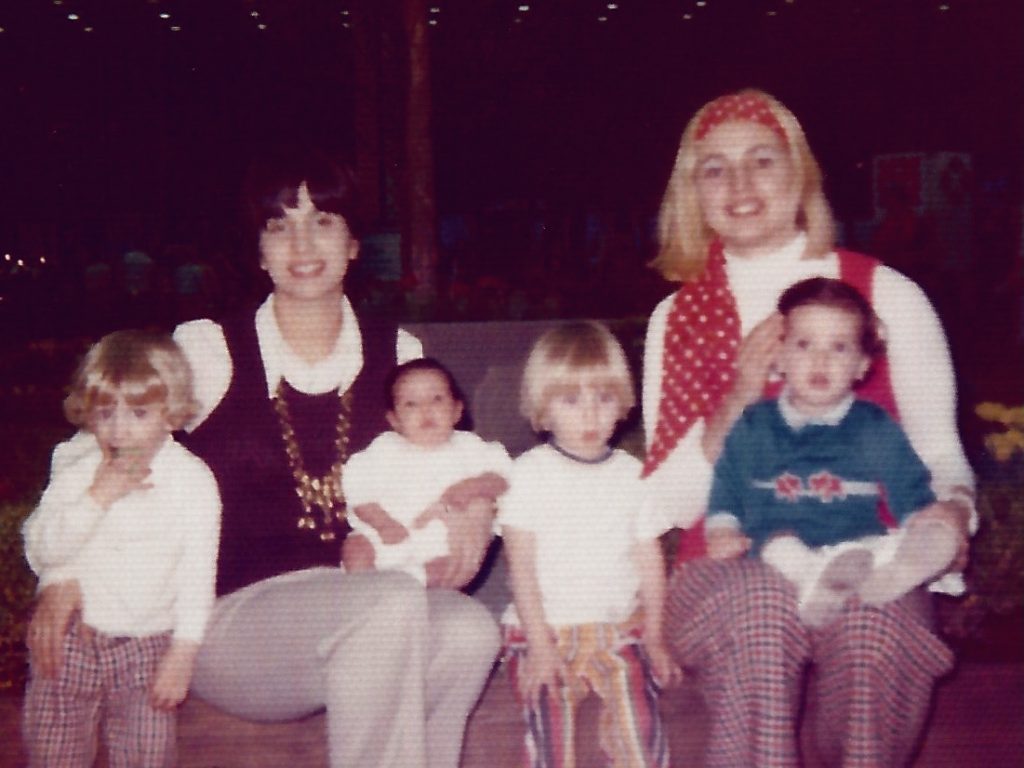 1972: Diane and Connie with our little ones.

To understand, I have to go back to 1971. We were young new moms staying at home with our infant sons, living in Prairie Shores, a high-rise apartment complex on the old Michael Reese Hospital campus in Chicago. My friend’s husband and mine were medical residents, our incomes were small, and our isolation was considerable. Her mother had died and mine lived out of town. One of her sons was nine months older than mine and she also had a baby. That made her my expert in child rearing. How lucky I was that she was such a calm, sensible mom who could laugh at most anything. Well, maybe not at her younger son pulling a dresser down by climbing up the drawers, but that’s another story.

Every morning at 7:30, my phone rang. Which sandbox should we go to, or did we want to start at the park? Your apartment or mine? By 8:00, we were out and about, snow or rain, frigid or hot weather. I can’t remember what we talked about for all of those hours. Only that we laughed a lot, figured out how to parent our children together, and shared some sadness as well. She was the friend who rescued my one-year-old son when the elevator doors shut before I could take him off, resulting in a ride to the top and back for him and hysteria for me. She was the friend who saved me when my diaper bag became entangled in the escalator we were riding up and down with our little ones to entertain them on a cold winter day. She was the sister I had longed for but never had. Call it karma or fate, but our oldest kids ended up professors in similar fields. They even roomed together for a semester in Cambridge. Was there something about the way we raised them together those first three years? 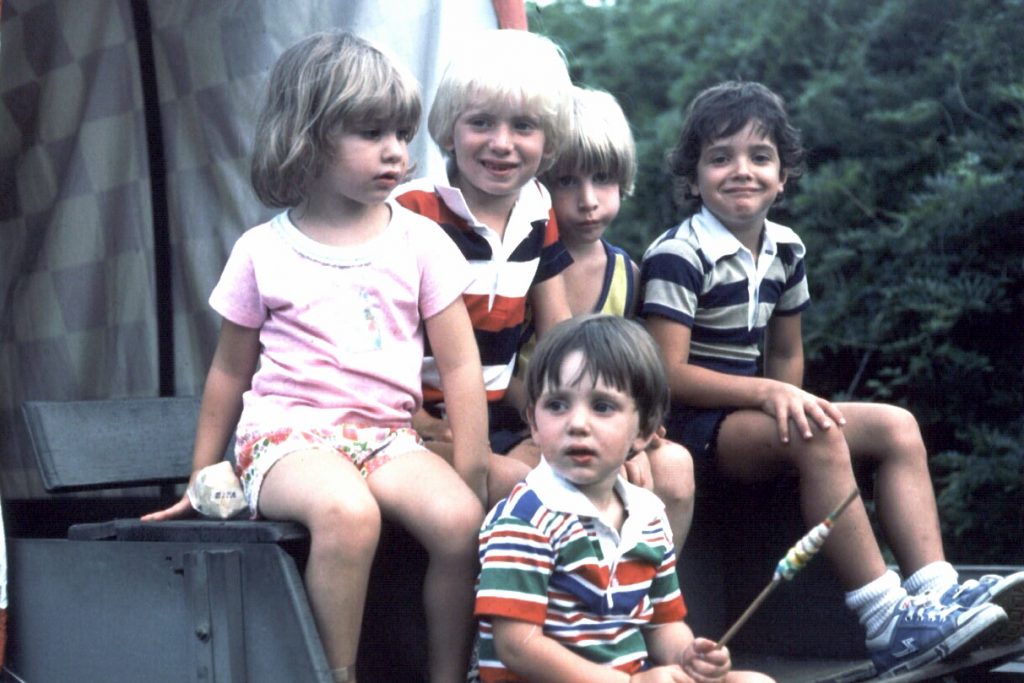 My kids (minus daughter #3) and Connie’s

Well, residencies end and folks move on, ending up all over the country. I stuck close to Chicago. She ended up in Oklahoma City and then Bethesda. We met for vacations when the kids were small, and then life just happened. Now we are both grandparents. The last time I saw her, we swapped stories about that. As always, we laughed until we cried. Not surprisingly, we were pretty much on the same page. 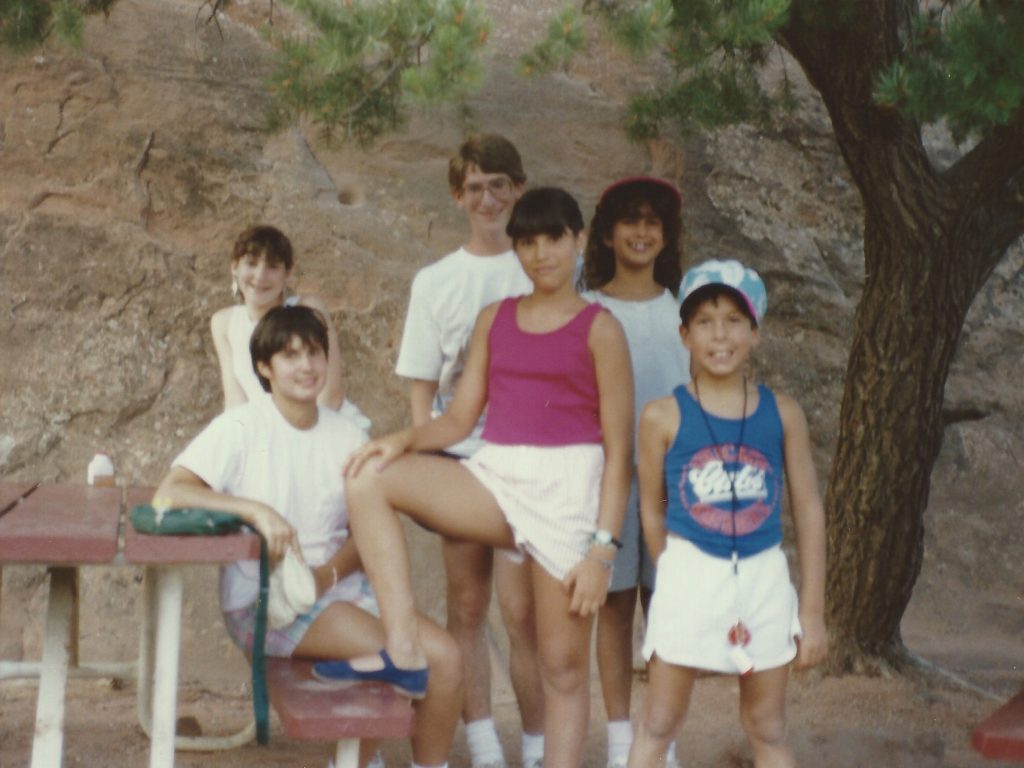 Diane’s kids and mine

When I think of her, especially at the beginning of a New Year, I still miss her presence. We were so young back then that the notion we would be grandparents and turn 70 seemed impossible to imagine. But now here we are, both wondering how so much time had passed since we took our kids on the shuttle bus to downtown Marshall Fields, or went on a vacation to Disneyland with four adults and six kids all fitting in a jumbo station wagon with the back seat folded down, or meeting again when our sons shared that apartment, or sharing wedding and grandkid photos. 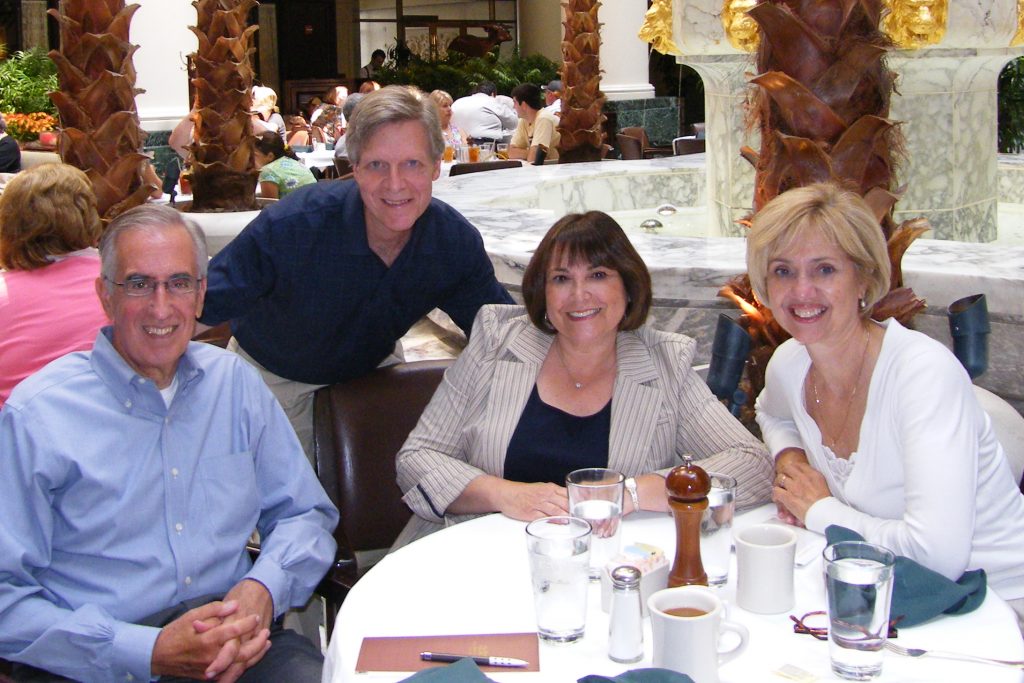 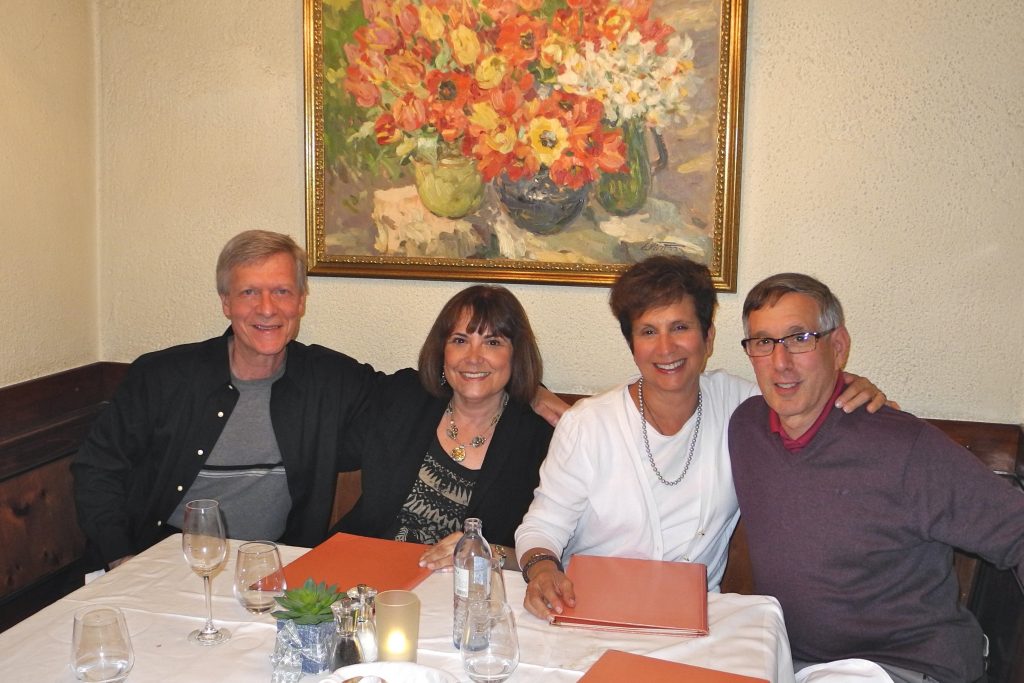 2014: With Diane at restaurant in Vienna (our last major vacation together)

Even as the years pile on, there is a thread that will always connect my life to hers. So, I’m going to keep writing my Christmas letters to my dear old friend. They may not be in the mail until after the New Year. That’s OK. She understands.

We don’t need that letter anymore because we reconnected via zoom this past year. Diane, another dear friend from that era, with whom I have stayed in closer touch, joined us. Unbelievably, even after so many years have passed since Diane and I saw or even talked to Connie, the connection is still there. Now we are all grandparents, sharing how that works during a pandemic, and supporting each other through serious illness (Connie’s husband — now doing well), anxiety, and disappointment over the obstacles to seeing our children and grandchildren who live out of town. Time passes, but the love endures. 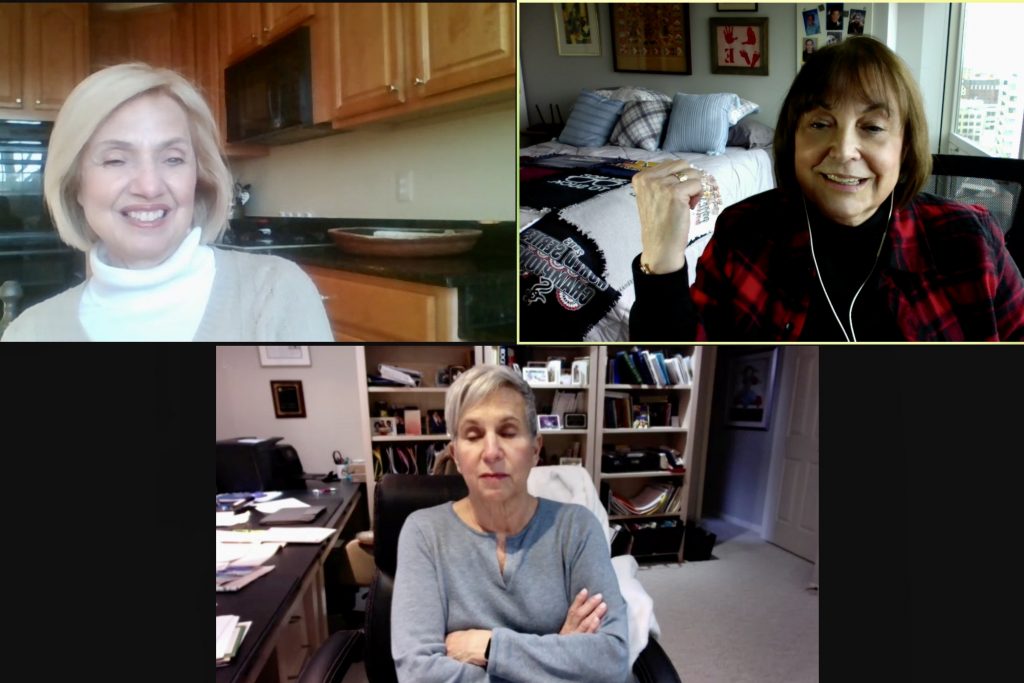 With apologizes to Diane, who wasn’t really sleeping, our latest zoom

18 Responses to A Christmas Letter from an Old Friend