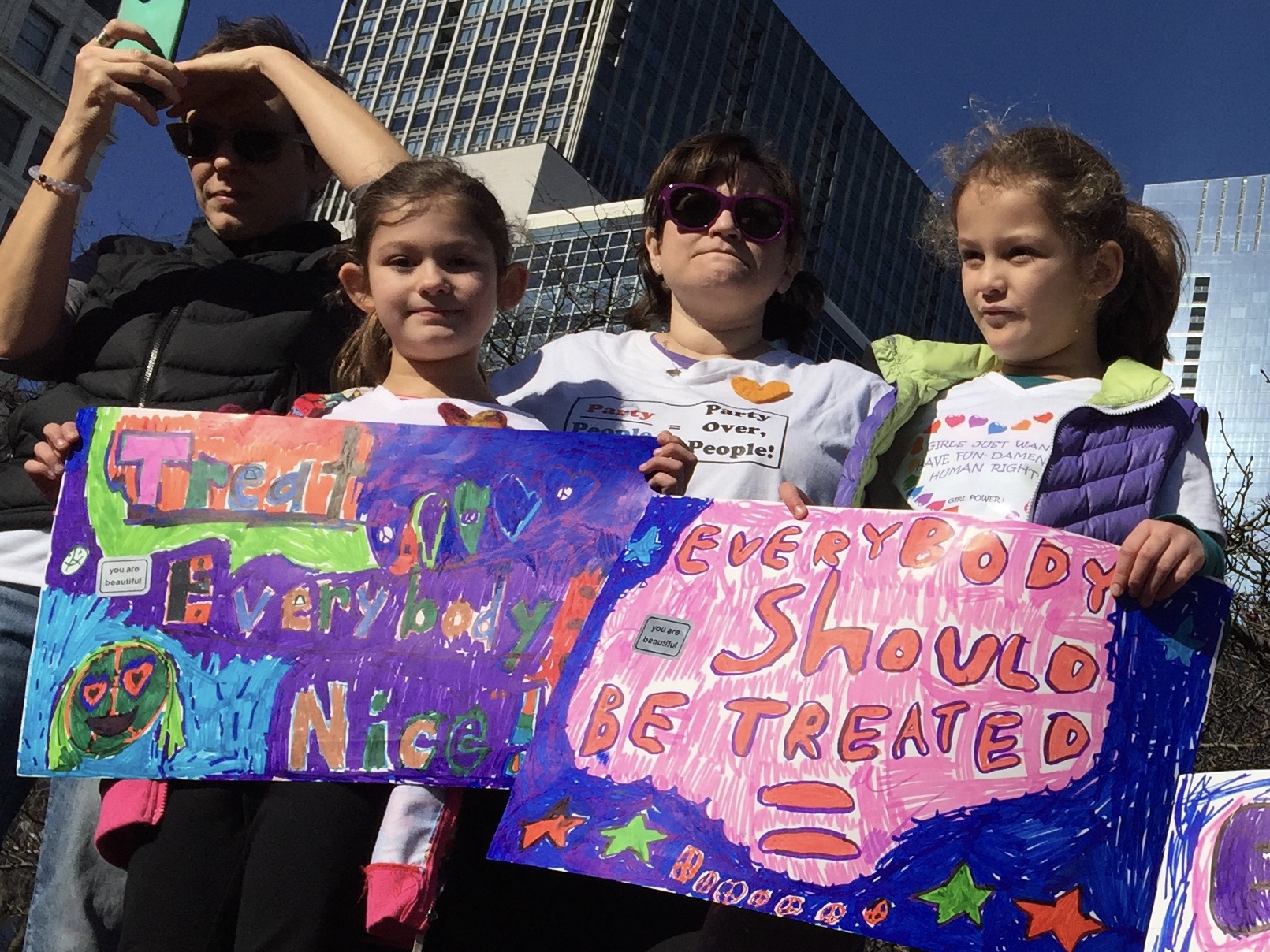 It was my favorite photo from the Chicago Women’s March on January 21, 2017. Two sweet young girls were holding up signs they had clearly made themselves. One said “Treat Everybody Nice” and the other “Everybody Should be Treated =” – such a powerful message from such young messengers.

They were marching partly as a tribute to Marcy, a woman whose life embodied so much of what protests and activism had accomplished to advance the cause of social justice.

Tons of people were taking their picture. Their message clearly touched a nerve in folks who came out to march. Turns out they are the then seven-year-old twin daughters of Andi Peinovich and Maria de la Calle and the granddaughters of the late Marcy Wiersch Johnson. They were marching partly as a tribute to Marcy, a woman whose life embodied so much of what protests and activism have accomplished to advance the cause of social justice. After seeing my blog post Nevertheless, She Persisted that featured the photo I took of Marcy’s granddaughters, I received emails from several women in Marcy’s family who recognized the children. Through these emails, I identified with and grew to admire Marcy. 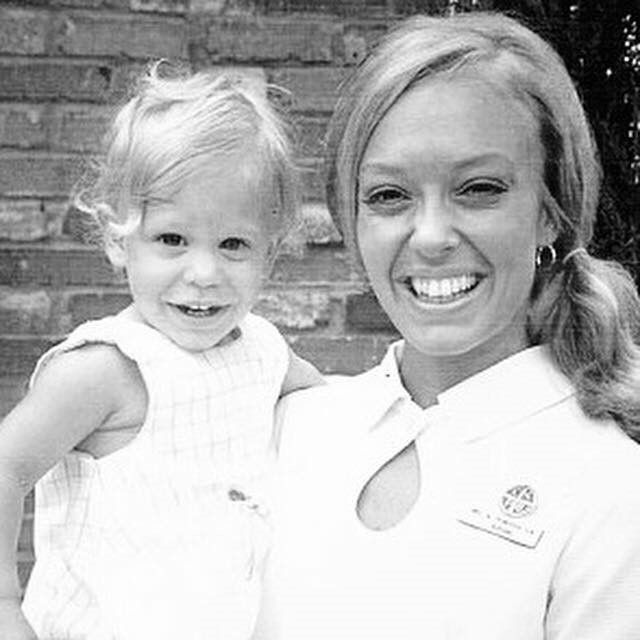 Marcy as a young nurse

Born on April 4, 1945, like me Marcy was on the cutting edge of what came to be known as the Baby Boomer generation. Her daughter Andi described her mother as “pretty amazing, definitely an original and not afraid to break the rules to stand up for what she felt was right.” Andi’s wife, Maria, emailed me on behalf of what she called “the passionate Wiersch Clan,” describing Grandma Marcy as “a great woman and activist. I was always able to relate to her on this level and admired her passion for social justice. Andi and I are so very lucky to come from supportive families and also to have the help of powerful women to raise our girls.”

In an email I received from Marcy’s sister, Linda Segebrecht, I learned, “Marcy would have been so proud of her girls. Active parenting and activism were values she passed on.” Linda went on to share that Marcy was a women’s and civil rights advocate in the 1960s. Her life story embodies the journey of many of us from that era.

Another sister, Jodie Costello, wrote that Marcy came from a family of strong women who were a treasure trove of inspiring stories. Her paternal grandmother was the first female principal in the state of Minnesota when women in positions of authority in education were rare. President Ford honored her for her outstanding work in education. Her mother, who was 96 at the time of the 2017 Women’s March, was a medical records administrator, having earned her degree back in the early 1940’s, when far fewer women than now were as well educated as she was. The women in Marcy’s family are fiercely devoted to one another and to women’s rights.

One of the stories her sisters, Linda and Jodie, shared was that in 1964, Marcy was expelled from the nursing program at Talmadge Memorial Hospital, part of the Medical College of Georgia School of Nursing. Her crime? She ate dinner with a fellow male nurses’ aide who happened to be black. Named for Eugene Talmadge, an avowed racist, the hospital was segregated and the simple act of sharing hamburgers and fries together was grounds for dismissal on trumped up charges. Marcy finished her training by enrolled in nursing school at her mother’s alma mater, College of St. Scholastica in Duluth, Minnesota. She earned a Bachelor of Science in nursing degree in 1967. As Eleanor Roosevelt said: “Women are like tea bags – they never know how strong they are until they get in hot water.”

The 1970s found Marcy living in the Haight Asbury section of San Francisco and protesting against the war in Vietnam and for civil rights. In 1982, Marcy began her almost 30-year career as a neonatal intensive care nurse at Children’s Hospital in San Francisco, retiring in 2012. Already the divorced single mother of Andi (mother of the children in the photo), Marcy went on to remarry, have bi-racial twins, and become a single parent again after divorcing their father.

By the 1980s, she was marching in Gay Pride parades, not knowing at that point that she was advocating on behalf of her daughter as well as all of the LBGTQ community. Marcy’s daughter and her partner were married as soon as it was legal to do so in New York City. They were all lucky to be in Washington, DC when the Supreme Court ruled gay marriage was legal everywhere. When Marcy’s family took pictures on the steps of the Supreme Court, no one dreamed they would have to be fighting this battle again in 2020. 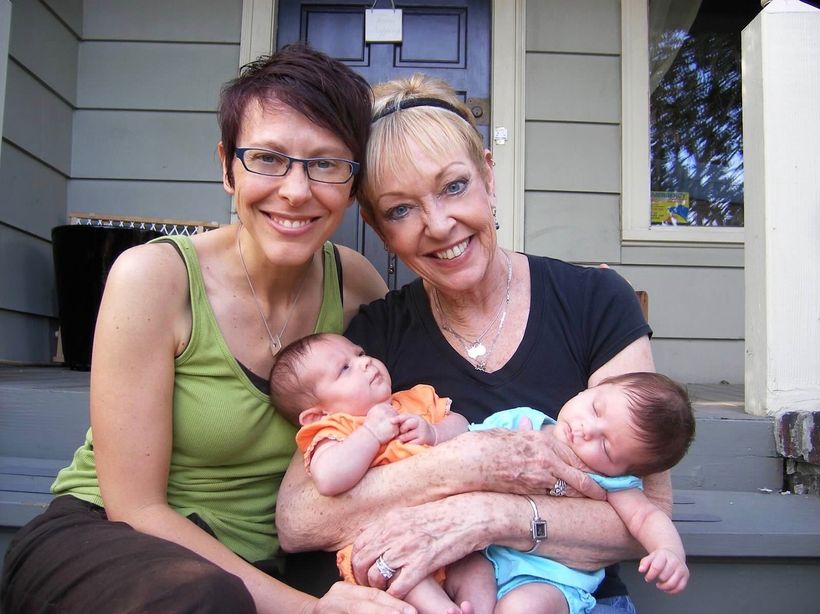 Marcy with her daughter Andi, and her twin granddaughters

Marcy was proud of her three children. Like her mother, Andi became a pediatric intensive care nurse in Chicago. Her other daughter, Amber, manages a restaurant in San Francisco. Her son Casey is an officer with the Oakland, California police department and participated the march there to honor his mother’s memory.

Marcy died of a brain aneurysm on May 5, 2015, just a month after her 70th birthday. Since that tragic loss, members of her family remark on a daily basis how upset she would have been to see the election of Donald Trump and its aftermath. Her daughter, Andi, described her mother as a sweet, compassionate woman and a “bright light who affected so many people in such a rich way.” In over 40 years of nursing, she touched the lives of countless babies and their families.

Marcy was an amazing woman and a perfect example of someone whose life should be celebrated. Sadly, many will never have the good fortune to experience her passion for justice, but she leaves behind a remarkable legacy. She raised three incredible children as a single parent and experienced the joy of having beautiful twin granddaughters. Her spirit was present at the 2017 Women’s March, and her granddaughters’ posters were a fitting tribute to Marcy Wiersch Johnson and the causes to which she devoted her life. 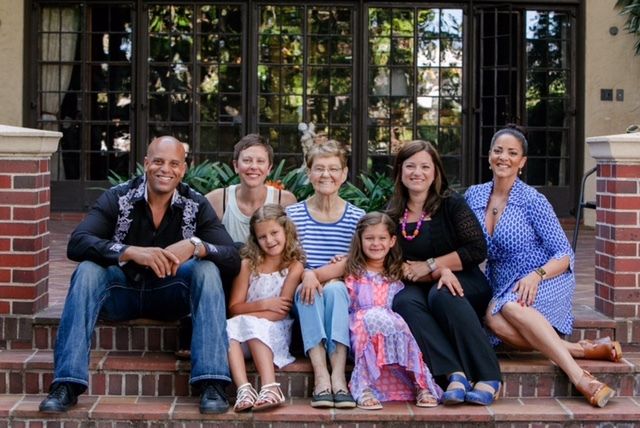 Like so many women, Marcy’s life had many twists and turns, but nevertheless, she persisted.

Thanks to Jodie Wiersch Costello for sharing her wonderful memoir about her sister entitled Winter Break, and to all of the members of Marcy’s family who emailed me, sent me photos, and so graciously shared their memories.

12 Responses to A Life Devoted to Protesting for Justice: Marcy Wiersch Johnson