Prompted By Summer of Love
6 comments. 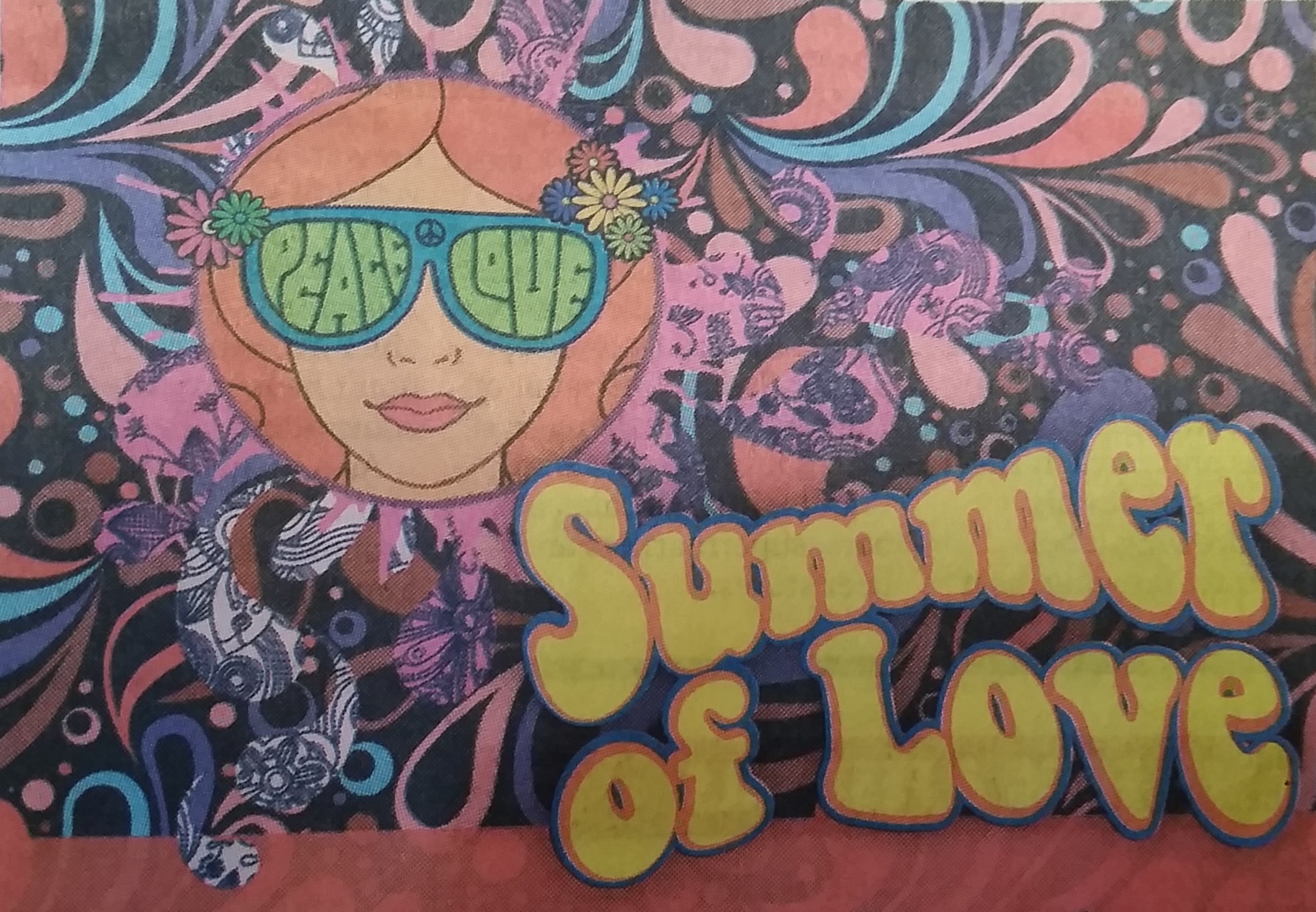 1967. The Summer of Love was the summer between my junior and senior years of high school. I was going to turn sixteen at the end of August — which meant that I had been claiming to be sixteen for months. I thought I was very sophisticated and wise. Retrospect readers may have already seen the poem about my summer program at Syracuse University entitled With a Little Help From My Friends, written in response to the prompt Altered States.

I would have loved to go to San Francisco that summer, it was talked about in all the media and so many popular songs. If only I could have thought of an academic reason to go, my parents probably would have let me. It was pretty far away from New Jersey though. I had never been farther west than Michigan.

Instead I went to Syracuse to learn physics, because I didn’t have room for it in my high school schedule since I was taking both Latin and Spanish. I ended up learning a lot more about drugs than I did about physics — maybe I should have taken chemistry instead, it might have been more useful!

The first time I ever smoked marijuana was at a party in one of the Syracuse dorms. I knew how to inhale, since I already smoked cigarettes (all of the cool kids at my high school did, and I was desperately trying to be cool). So I took a toke when the joint came around without any embarrassing coughing, and learned from watching the others that I needed to hold the smoke in instead of just exhaling immediately like you would with a cigarette.

Sitting around in a circle on the floor at that party, I didn’t feel stoned, although I wasn’t sure what that would feel like anyway. I had been drunk once, in 10th grade, when I drank an entire six-pack of beer at a party. I didn’t like the way that had felt — room spinning, nausea — so I was glad I wasn’t feeling that way. I just felt incredibly happy and in love with the world. I was singing along with all the songs that were being played on the stereo. Then the song “You Keep Me Hangin’ On” started. It was so low, and s-o-o-o-o
s-l-o-w that I couldn’t believe it. Wow, I thought, I must be really wasted after all! Then I found out it was NOT the Supremes singing, but rather a group called Vanilla Fudge, four white guys from Long Island. So maybe I wasn’t that wasted, but the song was amazing! I will never forget the feeling I had listening to that song.

There were lots more parties and lots of amazing music that summer. I heard Sergeant Pepper for the first time at Syracuse. “Carrie Anne,” by the Hollies, is another song I strongly associate with that period. One of the college guys was making a short film, and he asked my roommate Amy and me to be in it. I think he had the hots for Amy. As I recall, we were both wearing little minidresses, and he filmed us walking away from the camera. Several times. The soundtrack was “Hang On Sloopy” by the McCoys. I don’t know if there was a plot to it or not.

I ended up taking a WP – withdrawal with a passing grade – in the physics course. There was no way I could have handled the final exam, I did NOT understand that class at all. It wasn’t because of the drugs, or at least not entirely. The professor seemed to assume a knowledge of calculus, and I had not had calculus yet.

The only good thing about the class was a guy named Murray, who was entering his senior year at Syracuse and drove a gold Camaro. ’67 was the first model year for the Camaro, designed to compete with the Mustang. (When the Camaro came out, the press asked Chevrolet what the name meant. They answered that it was a small, vicious animal that eats mustangs.) I thought Murray and the Camaro were both pretty exciting. He was nice to me, but nothing happened between us, possibly because he knew how young I was. I recently found him on facebook, but haven’t sent him a friend request. I don’t even know if he would recognize my name.

Back in high school for my senior year, some aspects of the summer seemed like a dream. I did keep in touch with Amy, who lived in a gorgeous brownstone on the Upper East Side of Manhattan. I would frequently take the bus in to the City, get together with her and get stoned. Many of my high school classmates were starting to discover drugs as well, but I was in the forefront. This was acknowledged by what one of the yearbook editors included as the final phrase in my yearbook write-up: “. . . spent the summer as a flower child.” 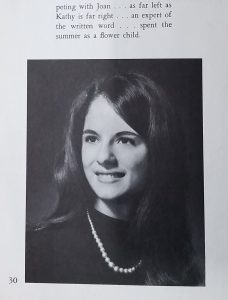 Part of my page in the yearbook

I finally got to San Francisco three years later, in the summer of 1970. I flew out there in late August, after finishing my summer job with a publishing company in Boston. I had a list of places I wanted to see. The Fillmore, City Lights Bookstore, and of course the corner of Haight and Ashbury. While it wasn’t the same as it would have been to be there in 1967, it was still great to see where the epicenter of hippie culture had been.

6 Responses to A Whiter Shade of Pale