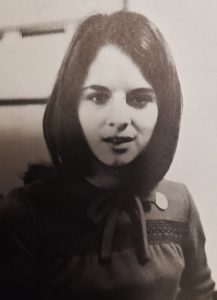 It’s the Summer of Love in San Francisco
Be sure to wear some flowers in your hair.

Meanwhile, across the country,
A high school girl, not quite sixteen,
End-of-summer birthday,
Tall and thin, with curly hair she irons straight,
And glasses which she seldom wears
Feels too old to go to camp,
Off to a summer program at Syracuse U.

Amy, her sophisticated roommate,
Who lives in a brownstone on the Upper East Side,
Designer clothes and savoir faire,
Already knows all about drugs and sex.
Later in New York the two of them will see
Hair:The American Tribal Love-Rock Musical,
a celebration of drugs and sex.

Syracuse physics class, full of college students
there because they flunked the course the first time.
She meets a gorgeous college boy named Murray,
just turned 20, who drives a gold Camaro.
She is smitten. Amy, what do you think?
She and Amy go to his party, everybody must get stoned.
He knows she is too young.

Such amazing music that summer.
Sergeant Pepper’s Lonely Hearts Club Band
Never tire of listening over and over again.
Lucy in the Sky with Diamonds.
I get high with a little help from my friends.

Want to inhale some freon?
Great high, only lasts a minute or two.
Sure, why not, sounds like fun.
Turns out that kids died from inhaling freon, lungs frozen.
Thankful that her lungs are okay.
Let’s stick to grass, forget about the freon.

In the coming years there will be hash, mescaline, LSD,
So many things to try!
Lots of good times and lots of good drugs.
But it all started with Syracuse, and Amy,
and Murray with the gold Camaro.

5 Responses to With a Little Help From My Friends