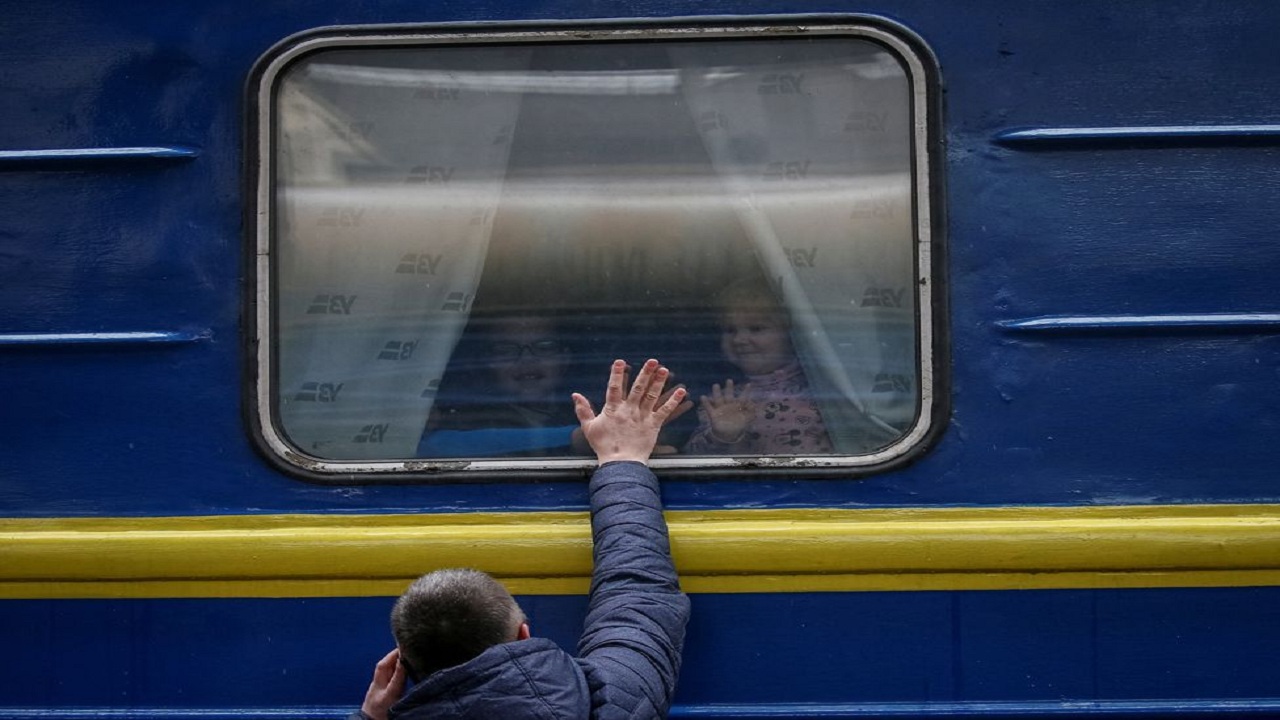 A woman holds a child in a paint-scabbed bunker beneath a burning steel mill. She is surrounded by children made oblivious by trauma. I try to imagine the shock waves from exploding bunker buster bombs that must travel through the reinforced concrete and steel floors and collapsed factory roof above her head. I can’t imagine the magnitude of the shock waves. She would like the soldiers to stop bombing them so she and her children can survive to become refugees.

A young woman dressed in blue jeans and parka, a fluorescent-orange knit cap embracing the fragility of her head, pushes forward, scuffed boots sturdy. A North Face backpack sits square on her back. In her left hand she grips a cat carrier. On her right shoulder she carries a shaggy dog, a big long-haired mutt who rests its chin on her back. She, the cat, and the dog are walking toward nothing but the straight line of a horizon.

An old woman, wrapped in a silo of coat, scarves, and blankets, shuffles her swollen feet along a sagging plank, a fast-flowing stream roiling inches beneath the makeshift bridge. Her mittened hands are extended, held in the gloves of a young, helmeted, flak-jacketed soldier, walking backwards leading the old woman to nowhere.

A mother with a chubby child, bundled in a down jacket presses her free hand against a train window. Outside and below her, a grizzled young man in a leather coat reaches up and presses her hand through the glass, condensation forming around the pair of matched hands, digits spread. The train jerks into motion and the young man moves his hand with her hand as the train gathers speed, heading somewhere. The men all stay behind to fight. I have no way to know how each man, each woman, each child, feels about this sudden separation.

I know nothing of these people except that, unlike so many displaced persons, they look like me, white-skinned, brown- or blue-eyed. They even dress like me, in familiar parkas and knit watch caps, hair gathered, clipped short, or braided, not shaven. At the train stations, few of them cry. I see no regret. They smile with strong, set expressions that I can only read as the clarity of people with no options beyond what they are doing in the moment, people with nowhere else to go from wherever they are leaving to the void they face.

I have never had my home bombed into splinters, watched my mother or sister raped or murdered. I give what I can, but the barrage of today’s images and stories flood over me in a chaotic torrent or explode, digging craters of rage, horror, and helplessness. Despite my lack of experience, I once again carry a hollow, boundless sadness and a zig-zag confusion that pits pathos against empathy.

18 Responses to A Zig Zag Confusion