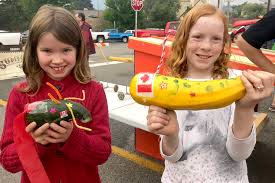 Ingham County, Michigan had a fair, but I never went to it.  Maybe my parents didn’t think looking at prize vegetables, embroidery and livestock were that enticing, not even the guaranteed sugary and fried food that fairs provide special dispensation to eat.  Or maybe it wasn’t worthy of discretionary funds, or it didn’t sound like fun to keep track of three little girls in a crowd.  We never had the conversation.  Neither parent grew up on a farm or was part of 4-H; they were aspiring academics.

And yet, somehow, I have experienced cotton candy, apple fritters, kettle corn, corn dogs, Indian tacos and bannock, and have roamed through outdoor venues with crowds of young people milling around midways, carnies, pavilions with exotic chickens, beer fests, dog shows, food trucks, music stages, lumberjack contests, and barrel races.  Not to mention street fairs and parades of all stripes. I just can’t tell you where and when.

However, my father was teaching at Michigan State University, one of the Land Grant colleges (known as “Cow College”, “Moo U”, and then “the Udder University”—or so the joke goes), with a degree in agricultural economics, so he might have had some curiosity about the fair.  Of course his interest was in international development, but still.

My mother’s father had been raised on a farm in Colorado, and he ran away at an early age from an abusive home life.  Although he lovingly tended his flower garden, he made a point of never growing any food crop, lived in cities and and pursued his own academic career instead.  There was no nostalgia for farm life imparted to his children.

And yet, somehow, I have experienced cotton candy, apple fritters, kettle corn, corn dogs, Indian tacos and bannock, and have roamed through outdoor venues with crowds of young people milling around midways, carnies, pavilions with exotic chickens, beer fests, dog shows, food trucks, music stages, lumberjack contests, and barrel races.  Not to mention street fairs and parades of all stripes. I just can’t tell you where and when.

Fairs celebrate food in many ways.  Sally had contractor client who grew up in rural Oregon; he would go to the 4-H shows each year and pick out a nice steer with a name, raised by a doting child, and buy it.  And have it slaughtered of course.  He knew it had been well taken care of, and that was how he got his meat. Something to be said for that—better than a feed lot.

When we moved in 2004 to Summerland, a rural (but not remote) community of around 11,000 people in BC’s Okanagan Valley, we found ourselves pleasantly back in time, in a town with a real main street.  A restored stretch of railroad track runs a vintage tourist steam train that carries you along a valley with apple and peach trees, sheep and llamas and horses.  It rounds the curve of the hill to pass by the small industrial area and on through vineyards to the trestle behind the agricultural research station.  The train toots its whistle, and people wave as you pass.  It’s like a Playskool setup—here’s the forest, here’s the river, here’s the mountain, there’s the lake, here’s the meadow, here’s the farm, here’s the horse, here’s Farmer John.

The Summerland Fall Fair started in 1909, and evolved from being the “Apple Fair” (but not very far), and has been held most years since then.  We had to check it out.  It was held in the local Curling Club building (of course there is one), and it took very little time to make the rounds of the prize zucchini, pumpkin, pies, preserves, needlework and handicrafts.  There was a ride for the kids in some cylindrical cars pulled by an ATV in the parking lot.  No livestock I could see.  Crowds were thin, but we did make new friends–who turned out to be from Chicago. Maybe the tradition was fading, as apples have given way to cherries, which have given way to grapes, and there are fewer farmers and more commuters in the town. 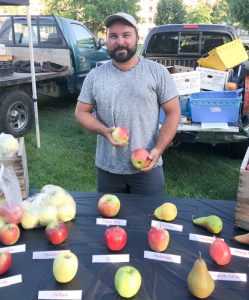 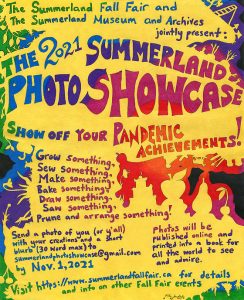 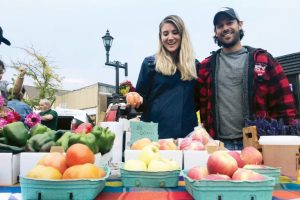 And yet, there is new life, as the fair is being revived this year after COVID , with fresh energy, a photography contest, and community-minded younger organic farmers making an effort.  And after all, isn’t celebrating the community really the heart of the fair?

15 Responses to All is Fair