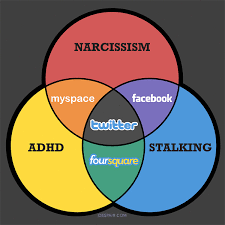 About three years ago in the run-up to our 50thprep school reunion the organizers requested that each of us submit a short piece about our experiences since graduation. Among the various particulars that I listed in a section about “Who’da thunk it”, i.e. at the time of our graduation, was this:

As a recidivist perpetrator of attempted humor, I know full well that “LOL”* is no substitute for a belly laugh.

“. . . and that most of us would spend hours every day staring at illuminated screens of all sizes interacting electronically with one another, simultaneously making us closer and more isolated?”

Well, what about it?

My social media experience is limited to a handful of venues.  I once was on Facebook but withdrew about five years ago because I deduced that Facebook was the source of a slew of unsolicited garbage that threatened to derail my spam filter.  I now participate in one Facebook Group – my prep school class, using an alias and a dedicated e-mail address to isolate spam.  The Group has a pulse but just barely.  I was on LinkedIn throughout my tenure as a solo consultant; the exposure and networking were necessary.  I discontinued that the instant I retired last year.  And I had a Twitter account associated with my consulting business but posted only a handful of tweets.  In terms of “traditional” social media, then, I am on the sidelines.  But this community is itself another social media group, is it not?  As a newbie my experience is so brief I cannot really address its significance in the larger sphere.  I am more than a bit taken by the premise and have enjoyed my time, albeit limited, on the platform.  My continuing social media activity is a college class listserv, a discussion forum begun over twenty years ago.  I have participated for the last fifteen years. Indeed, it is via the class listserv that I am now in this community (thanks again, Suzy and John).

Obviously, there is a fundamental difference between the class listserv and this community, on the one hand, and Facebook and its ilk on the other.  The former is “community centric” – the premise of the community attracts participants who then choose to enroll; the hook is the conversation. The latter (Facebook Groups excepted) is a “serial” community – an extended network of “friends” builds over time, one “friend” request after another; the hook is, well, I am not sure what the hook is. Certainly, Facebook is a way to reconnect with friends and acquaintances from one’s past, but how productive is it in establishing new relationships, new friendships?  Color me skeptical.  On the other hand, the listserv and this community strike me as fertile grounds for new friendships.

The reason, I think, is patent: Most often, if not universally, friendships form over shared interests.  When the purpose or an essential byproduct of an online group is the development or promotion of shared interests, friendships will naturally form.  The listserv includes hundreds of classmates and regular participants number about eighty, more or less.  A participant’s post may be a reminiscence, a commentary on political or social current events, a request for recommendations, or any number of things.  Conversations ensue.  And friendships.  Over the years I have grown close, at least virtually, to many.  Ironically these friends are people I did not know when we were undergraduates.  Because the linkage is our college class, at reunions we have the opportunity to actually meet the people we have made our virtual friends.  Magical.

But.  There is a trap, as I suggest in my opening.  It is possible, whether in the context of a “community centric” group or “serial community” to become so wrapped up in it as to withdraw from the nonvirtual world.  For some, and I think of a classmate in Wisconsin who is wheelchair-bound, listserv participations, and he has many, are lifelines.  But for those not so physically challenged, isolation is by choice.  And it squanders the opportunity for the rewards of real friendship.  As a recidivist perpetrator of attempted humor, I know full well that “LOL”* is no substitute for a belly laugh.

I left my last corporate employment gig over fifteen years ago.  I went from managing a firm of one hundred twenty-five to solo consulting, and relocated from Chicagoland to the Adirondacks.  Instant isolation.  I reached out, virtually, in many ways, including joining the class listserv. But I also undertook to get actively into the community.  It started by renting a post office box rather than receiving mail on my street. The daily interaction was a refreshing break in the day.  After a year we relocated to the county seat nearby, and the process continued. Over time I developed a new network, including joining the local Kiwanis organization. Kiwanis is a service, rather than fraternal organization.  Our group did a lot for the community, particularly fund raising for other groups. And it was a good bunch of folks. I look back, now, fondly on many of those activities, and relish, particularly, a pancake breakfast fundraiser where I manned the griddle and earned the nickname, “Bernie”.  I loved it.

So.  Let us enjoy our virtual communities and relationships. But may I suggest that each of you continue to foster new friendships in the nonvirtual world? Who knows, you may discover your inner Bernie. 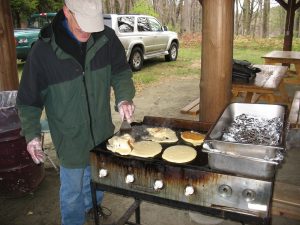