Invasion of the Body Snatchers by Charles Degelman
100
(152 Stories) 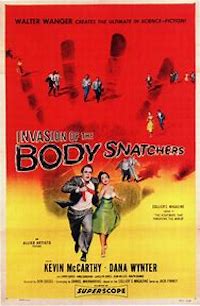 University, CA — A communications professor stood by helpless as a sudden convergence on a trending SnapChat app cybercongealed 16 of his students in a university lecture hall. I spoke to the professor a few days following the incident. I met him after class in a large hall where he had just lectured on the origins and contemporary implications of the phrase “be here now.”

“Actually, 99 percent of my students are very cyber-controlled in my classes,” the professor began. “I love my students. I’m graced with a wonderfully applied student body and I feel a great kinship with them. There’s very little use — or abuse — of social media in the classroom unless they are reporting on its various platforms and influences as part of the class.

He sighed and shrugged. “Still, at the beginning of each semester, I show them a clip of ‘Invasion of the Body Snatchers,’ in which alien abductors “podnap” everyday citizens while they sleep, spin them into cocoons, indoctrinate them, and return them to society as “pod people,” soulless conformists who act mechanically in the interests of the invaders.”

The professor spoke in a measured manner, weighing his words carefully. “I liken cell phone use in class to the behavior of the pod people in the infamous film, pitched to the studios as an anti-communist allegory in which the body snatchers represented the creepy-crawly abductions of an unsuspecting populace by the communist menace. But on this one day…”

“We had just finished discussing the meaning of ‘Body Snatchers’, when SnapChat released a new gender-transformative app,” said the professor. He explained that the new GenderBender mobil phone app renders any targeted selfie into a gender-opposite portrait.

“Before I could say SnapChat,” the professor continued, “a cluster of students had plunged into their phones. An eerie light emanated from the various screens, illuminating their features. As I watched, students began to change appearance. Superficially at first. Hair shortened or lengthened, became tinted, streaked… Makeup materialized or disappeared to be replaced by beards.”

The professor paused. He seemed to be re-living the moment. “Body parts disappeared as the GenderBender app cropped each body to fit its targeted selfie dimensions.”

“It was impossible to determine if any SnapChatters were aware of their transformation.” He leaned wearily against the stage and stared down at his hands. His speaking cadence slowed, his voice grew distant. “Then… they just… They began to, to morph, their outlines flowing like syrup. Yeah,” he said. “They flowed in this… this viscous, pixelated fluid… toward each other, but still IRL.”

He leaned into me. “But they weren’t really here,” he whispered.

He drew back as if to compose himself and began to pace the space along the front row of seats. His voice rose in pitch. “It was as if they all became one thing, one… entity. They just… I dunno,” he said, running his fingers through his graying hair. “They came together with a gurgling sound and just…”

The professor clapped his hands together. “…disappeared. There was a ‘pop’ as the atmosphere closed around the space they had occupied. You know…” His eyes turned steely gray and he stared through the window. “Like the kind of ‘pop’ you make if you stick your finger into your mouth, like this…”

He hooked his index finger into the corner of his mouth.

He laughed, a little hysterically, walked to the door, turned, pointed at the empty hall, and roared a strange, hollow, open-mouthed hiss.

“I’m over it now,” the professor asserted. “But sometimes, when I walk around campus, I often have to sidestep to avoid a head-down student, blindly caught out of body, surrounded by the cocoon of her iPhone. Then, the final scene of that often-remade film comes back to haunt me.”

10 Responses to Invasion of the Body Snatchers