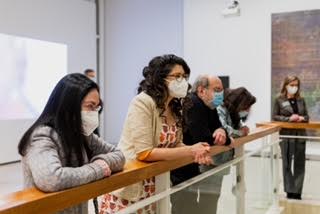 I consider March to be the beginning of year three of the pandemic. It was in March, 2020 when the virus began to affect my life. My last in-person event at the Rose was a lecture by acclaimed artist Fred Wilson, followed by a select group going to dinner in Waltham on March 3, 2020. Last chorus practice on March 9. My day-timer says, “crazy at the grocery story” on Friday, March 13. My last day going to my gym was the 14th; all my doctors yelled at me that it was no longer safe to go there live (we were using sanitizing wipes on every piece of equipment, even the hand weights).

We were at dinner at a friend’s home on Sunday, March 15 when word came that our governor would shut down the state two days later. He saw the bars jammed just before St. Patrick’s Day and knew he had to put restrictions in place. COVID-19 was spreading like wild fire. We still didn’t know exactly how it spread. The lockdown had begun. We could only go out to get essentials: food, medicine and entry was limited in those places. I found Josie, teaching via Zoom, on Saturday, March 21. And so the pandemic had set in for real. We scrambled to get masks and hand sanitizer.

Little by little, life returned to some semblance of normal. We did go to Martha’s Vineyard that summer, but only ate outdoors. We called it the “summer of the backyard”. In February, 2021, the vaccine changed everything for us, as we eagerly got vaccinated as quickly as we could, never believing that the right wing would become the anti-science party, making a “political statement” about doubting the reality in front of their noses, not understanding the meaning of “freedom” and “liberty”, sacrificing the good of all for selfishness. People on their death bed refusing to believe they had Covid-19. Propaganda and lies are scary and dangerous.

March 10, 2022 was a wonderful, busy day for me. I had my hair done (I went back to that the second the hair salons opened, wearing a mask as long as it was appropriate to do so). I called my friend Christie’s mother, Millie, one of my favorite people and a real surrogate mother to me, to wish her a heartfelt happy 96th birthday. And I went to the first live Rose opening in two years. We had to show proof of vaccination and wear masks in-doors (that is a Brandeis policy). It was by-invitation only, to keep the numbers manageable, but it was wonderful to be back after two years of virtual events. The Featured photo was taken that evening (I am the person on the left). Invited guests went to dinner in Waltham again. It almost felt normal.

I’ve been back to my gym for some time now. Due to my ankle injury, I’m mostly doing mat Pilates, but decided that I could try riding the recumbent bike and some work on machines. Now that the indoor mask mandate is lifted, I don’t mind getting sweaty on the bike. I know that everyone who enters the gym must be fully vaccinated (that was necessary to enter when my gym re-opened after the lockdown) and they have installed huge air filtration systems, so I feel safe working out. I also tend to go at less-busy times of the day. I still stream Josie’s classes at other times as well. After so many months of inactivity, it is difficult to regain fitness. 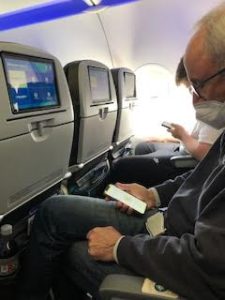 On March 22, we flew to California for a long-planned trip with friends. We bought passes last September (after Delta, before Omicron) to the Sonoma International Film Festival. At the time, California still had a mask mandate and the festival said they required proof of vaccination. Sitting in a crowded movie theater gave us pause and at first, we wore masks, but quickly felt at ease. Our friends told us where they wanted to stay (they had stayed there years ago), so we also made those reservations and got rental cars. From there we would continue on to Carmel for several days, joined by another couple, also good friends from home and on the Vineyard. We would stay at the Cypress Inn, a dog-friendly place famously owned by the late Doris Day, with her movie posters adorning the walls and one of her movies playing on a loop (closed caption) in the eating area.

We waited until a month before the event to make our final plans and book our flights. We had all been boosted and felt OK about the travel and festival. It turned out to be a good festival; quite a lot of fun to be with our friends. The weather was better than Boston, though usually cool in the morning, warm later in the afternoon, then cool again in the evening, so figuring out what to wear was challenging (I know – layers). 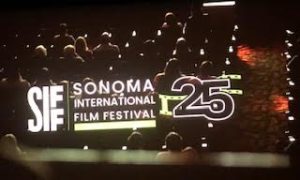 I can’t really recommend any films, as most did not yet have US distribution. Perhaps our favorite was called “The Road Dance”. It takes place in the Outer Hebrides during WWI, is based on a book, though they changed the ending and the writer/director, Richie Adams was in attendance (as were many of the directors) and did a good Q&A. It turned out, he and his wife were staying at our hotel and we had a long talk with him over breakfast one morning, then we saw them again at dinner one night, and went with them to their final Q&A. They were lovely people and we appreciated how friendly they were. We also really liked a documentary on the blues guitarist Buddy Guy. So it was an eclectic range of films.

Then on to Carmel, driving over the Golden Gate Bridge. 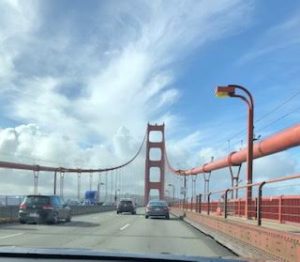 Driving across the Golden Gate Bridge

One friend had made dinner reservations for every night the six of us were together, which was good planning, as the town was full. Three of our group played the par three (the Hay) course at Pebble Beach twice and enjoyed themselves (it had recently been redesigned by Tiger Woods) while Joan and I wandered in and out of the shops in Carmel and once bought some food and had a picnic at the beach, watching squirrels run around, fight, play and entertain us. It was good to just laugh and talk. This was the friend who had us to the last dinner before lockdown on March 15, 2020. 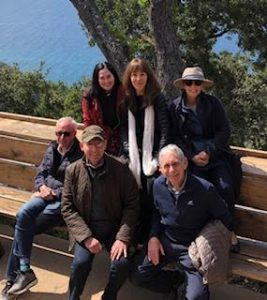 We had lunch at Nepenthe, a famous spot in Big Sur, tried to visit Pfeiffer Beach, but the winds were up, blowing probably 50mph and we got sandblasted.

We celebrated Henry’s birthday with drinks at the Inn at Spanish Bay while listening to the lone piper. Playing the bag pipes is not easy and this fellow was only so-so, but it is a spectacular setting and we enjoyed ourselves before driving back to Carmel for our final dinner together. 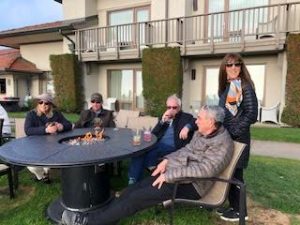 On April 1, we drove up to Palo Alto for a visit with my dear high school friends, the founders of Retrospect, Patti and John Zussman. Patti came over to my hotel for an afternoon chat, then we regrouped for an evening dinner. It was great to catch up before heading home. 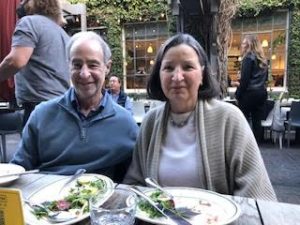 Dinner with Patti and John, founders of Retrospect (and my friends since 10th grade).

Throughout the trip, we’d get updates from our London kids on what little Rosa is up to. She turned 3 months old while we were in Sonoma and they called (via WhatsApp) so we could try and sing her happy birthday with a cupcake and candle. She didn’t know what was going on and was not amused. But Anna sent a cute video, playing with her to Beach Boys music and getting her to laugh. And David demonstrated that she has found her vocal cords. She wasn’t cooing, more squealing, but definitely enjoying the sound of her own voice. It is so interesting to watch her develop so rapidly at this age. We will visit again in mid-May. That is the next big thing on our agenda before heading to Martha’s Vineyard for the season. 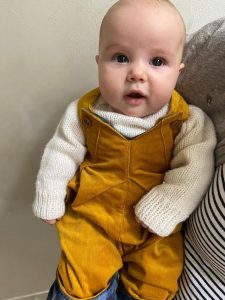 We both got our second booster as soon as we returned home. I wanted it onboard before heading back to the UK. The BA.2 variant seems to be waning there, but is definitely on the rise in the Boston area (though, fortunately, not severe cases or deaths).

My chorus went back to live rehearsals in February, as long as you were fully vaccinated and wearing a mask, but I did not go back. Not yet. I plan to go back in September. Dan was fearful about in-door singing, and a friend recently said that half the members of the Tanglewood Festival Chorus (those who sing with the Boston Symphony) have Covid. Not a good omen. And I have a full-plate of travel right now, so would miss lots of rehearsals anyway.

I acknowledge that each step towards normal we take must be assessed for our tolerance for risk, and we look at rising (and in London), falling caseloads appropriately. The mask-mandate on public transit had just been extended again to May 3. We leave for London on May 4. There is certainly still lots of COVID around; it rose dramatically in Massachusetts over the past week. We take each day as it comes.

I hope we are in the endemic phase of this and can now just have annual boosters. I am ready.

22 Responses to Back to Living