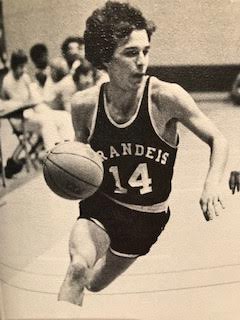 I was hot and heavy with Bob my sophomore year, but he had a bad habit of wandering off with other girls. This did not make me happy at all! I was really into him, but would entertain offers from other guys when he misbehaved.

I loved going to our school basketball games and particularly loved watching our star ball handler; my classmate, John P. Several of my suite mates were cheerleaders and I’d sit behind them on the bleachers, cheering loudly.

One day I received a note via intra-campus mail from John. I didn’t realize he noticed me and thought his communication was quite clever, if a bit forward. The note read, “If the watch dog ever lets down his guard, look me up.”  John clearly had no idea what was going on between Bob and me; how deeply I loved him, or how much he pissed me off when he’d take up with other girls. I confess, the note got my attention.

So after dinner on the night of Sunday, January 9, 1972, I wandered over to John’s dorm room in North Quad and knocked on his door. His roommate Bill answered, gobsmacked. He couldn’t believe I was there. John was not. He was home in Arlington. Bill politely invited me in and called John. “You’ll never believe who’s in our room: Betsy Sarason!”  There was silence for a moment, then a bit of conversation; I could only hear part. Bill hung up, assured me that John would be back on campus shortly and proceeded to pleasantly entertain me until John showed up. Bill was good at conversation, a charming fellow. John showed up within the half hour, very pleased that I had taken him up on his offer.

The next night we had dinner together in one of the cafeterias. I went for a swim and he stopped by my dorm room later. I guess that was our first date, or perhaps it was the night before in his dorm room when I answered his summons. Dates at Brandeis could be difficult to define.

Tuesday, I watched John lead the charge as Brandeis lost to Harvard (125-117). I stopped by his dorm room after the game to console him. I caught the last 10 minutes of the game on Thursday night when we beat Suffolk (86-111). John took me to a party in his dorm, North C. I felt special to be there after a winning game with the star of the team.

Friday night was date night at Brandeis and John took me to dinner at The Chateau, an Italian restaurant in Waltham. After, we saw “East of Eden” on campus. He was always a gentleman with me, no pressure. Very friendly and pleasant. The next night I went to the basketball game. We lost to Tufts in a close one (82-80). But after, I went to a dance in the student union with Bob. He was back from his wanderings and I was happy to be back with him. My interlude with John was over.

I continued to go to basketball games, on and off. John and I paid little attention to one another. By senior year, I was busy student teaching first semester, then stage managed a complicated show. By this point, I was engaged to Dan, who had already graduated, worked in Waltham, technically lived with his parents in Newton, but came to my dorm room every night. I didn’t go to a single game. John was in the rear view mirror.

I started working on reunions and calling my classmates with my 15th reunion in 1989. I have worked on every one since. I always put my basketball buddies on my list of classmates to contact, so through the years, we’d talk. I learned about John’s family and his career, but five years ago, things changed. Email was the preferred way to contact and he never returned the emails I sent in February for our June reunion. Bill did, we immediately set a lunch date, laughed and talked non-stop and became fast friends after 40 years. I continued to contact John, but he didn’t return my emails or phone calls, which really bothered me after all this time. I didn’t understand the cold-shoulder. Finally, in May he said he couldn’t attend the reunion. Bill did, along with another one of the basketball buddies and both enjoyed it. We all stayed in touch.

It continued to bother me that John had blown me off. I didn’t get it. I don’t like to lose people I once considered friends. So I started a campaign for us to get together. He rebuffed my efforts. There was always some excuse. Finally, my emails became less frequent. I offered him congratulations when I learned one of his daughters had married and he sent a video of his toast. It was surprisingly nice to hear his voice after more than 40 years. I wished him birthday greetings a few years ago, but my emails tapered off.

Out of the blue, one day in December of 2017, he called me on my cellphone. I was surprised and pleased. We chatted a long time and set a lunch date for later that month. He called just before the date to postpone due to illness.

We finally met at the Chestnut Hill Seasons 52, on the afternoon of January 9, 2018; 46 years to the day since that night I’d shown up at his dorm room our sophomore year. It was wonderful to reconnect. 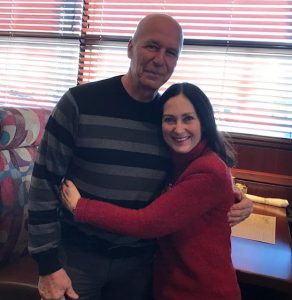 We sat and chatted for hours. We had a lot of catching up to do; family, health, careers. John had no memory of our five day “romance”. As perhaps one might surmise, I keep a date book going back to college, so could provide the written account with his name in it, much to his delight. He wanted to be sure he had been a gentleman. I assured him that he had been. He is now a very sweet, kind person with an abiding love for his family and real friendship has blossomed between us. We can’t really see each other, but we can talk or text as a way to stay in touch and keep up with each other.

Both he and Bill had planned to come to our 45th reunion, but circumstances changed and neither did. It was John who called a few weeks ago when a classmate, another one of the basketball crew, was found dead in his bed at the age of 66. It stunned and grieved us all. It makes me cherish these friendships even more.  We are not getting younger and must hold these dear people close.