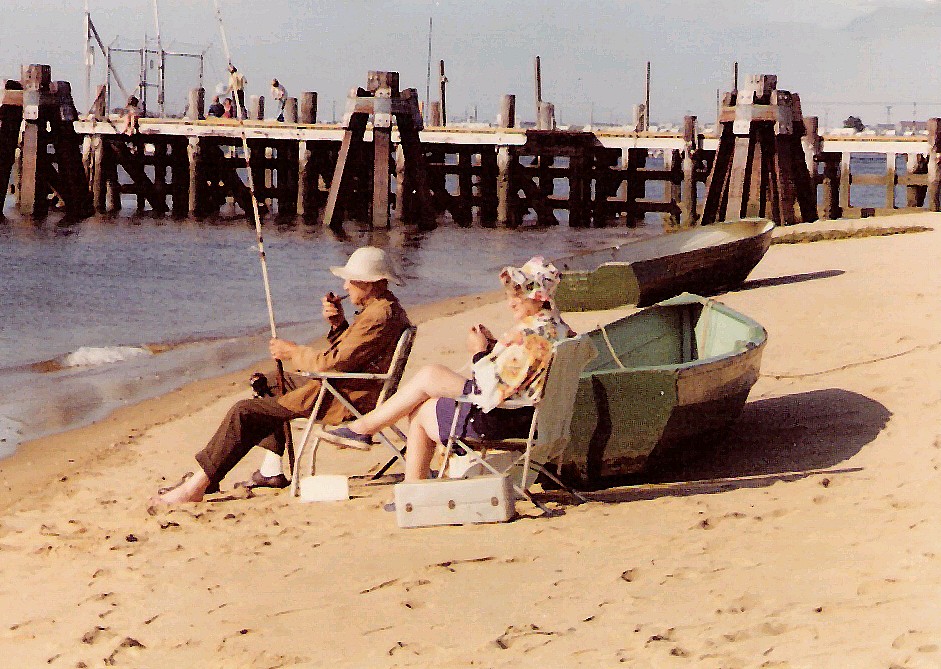 On the evening of Friday, October 2nd, 1986, I was doing metals analyses on freshwater clam tissue samples (yes, doctoral programs are that romantic) when a late-season storm killed the power. This meant that when the electricity returned, I’d have to recalibrate the instrument and do most of the samples over, all of which would take at least a couple of hours. I stood in the darkened laboratory, staring out the window, annoyed, wondering how to proceed. The entire campus was dark, lit only by flashes of lightning or the headlights of cars passing ghost-like through the heavy rain. I thought that I was alone in the building until the door opened behind me.

Made nervous by being alone in a deserted lab building on an actual dark and stormy night, Gina, a grad student working in her lab downstairs, came up to my lab seeking company in the now spooky and very dark building.

Made nervous by being alone in a deserted lab building on an actual dark and stormy night, Gina, a grad student working in her lab downstairs, came up to my lab seeking company in the now lightless and spooky building.

Gina had started in our grad program that summer. She was tall, statuesque, and extremely pretty in the Italian Jersey-Girl mode. In the male-heavy milieu of our Department back then, she was quite popular! I jokingly referred to her (although never out loud) as the T&LBGS (Tall and Lovely Brunette Grad Student). We did know each other somewhat; I’d chatted with her at our weekly Friday afternoon grad student wine-and-cheese gatherings. And then there had been the shopping assignment.

In June our Department head had randomly picked the two of us to shop for generally useful lab equipment because having a grant run out with significant money in it is Just Not Done. We’d spent the next week or so perusing equipment catalogs and compiling lists. Huddling with her at a lab bench, I couldn’t avoid noticing how intelligent she was, that she never wore any makeup, and how delicious she smelled without any perfume. I was acutely aware of the way her long, wavy hair moved when she tilted her head just so…

But I was, for good or ill (mostly ill by that point) married, and we worked in different labs for different advisors. She was microbiology and I was toxicology. So I really had not gotten to know her all that well by the time the power went out on that October night.

Standing in the darkened lab, watching the rain fall and the lightning flicker, we decided that we were done with science for the evening.

In October of 1986 I was newly single; my wife had abruptly ended our unhappy four-year relationship just two months before. I was not sad about that; it was a huge relief to be done with it at last. But the idea of pursuing Gina had never entered my mind. Four years of terrible conflict had left me emotionally exhausted; I needed a long, calm and solitary interlude to glue myself back together. The last thing anyone else needed was to get involved with me.  I also knew several of the sharks that were circling her; younger, better looking sharks with nice cars and better jobs or prospects.

What could a broke, divorcing 30 year old basket case of a grad student offer this lovely woman of just twenty-four?

I was hungry, and the idea of returning through the storm to my empty apartment and something thawed in the microwave seemed pretty bleak. On a whim, I asked T&LBGS if she’d like to go get some pizza and maybe see an extremely low-budget SF spoof film that was playing on a distant part of campus that might still have power.

We took separate cars over to the campus across the river, where indeed there was power and light and pizza and a movie so bad that it was quite entertaining. The rain had stopped when we left the Student Center after the show and returned to our cars parked side by side. We stood out in the lot in the damp, now-chilly October night, casting deep black shadows in the yellow sodium vapor light. We laughed about our fellow students, and how desperately they pursued the few women in the department.

Neither of us can recall who kissed whom first. Gina says she thinks it was me, which is surprising; I was never big in the self-assurance department. But neither of us wanted to stop. Not in the parking lot, or her car, or at her apartment that night. Or the next day.

In fact, we haven’t stopped yet!

4 Responses to Pizza and a Bad Movie

Our First Date
by Jeff Gerken