My Blind Date by Anonymous

I drove up to Boston with my buddy to see Kubrick’s new superflick, 2001: A Space Odyssey. I mean this was supposed to be most amazing breakthrough in everything from technology to the deepest, darkest, most thought-provoking use of the cinema thus far. That’s how everybody was talking about this film, I mean everybody in Professor Thompson’s Cybernetics and Film class, this gen ed class that was cool. So I was pretty hot to see the movie.

It was just supposed to be with friends, not with a girl I didn’t even know.

The idea was that my buddy was there in Boston to see his girlfriend and I wanted to see 2001 and then he said something that made me pretty nervous, that his girlfriend had found a girl for me. Like… a girl for me? I told him I thought it was just going to be us, my buddy and his girl, we’d hung out a little bit before, so she was used to me. I mean, it was just supposed to be with friends, not with a girl I didn’t even know.

But my buddy said that his girlfriend said this girl was really more than just a girl, she was more like cool. That scared me, too, secretly. I mean, what is a cool girl like, now we’re in college and everything. But I didn’t say anything. Maybe she’d want to talk about Kubrick and stuff anyway.

Anyway, I really wanted to see the movie and everything was planned and we went over to Cambridge and up to Radcliffe where I hadn’t ever been before. We went into the quadrangle of brick buildings and up into this one hall, with a long lobby with tables in it, pretty fancy for a dorm, but this was Radcliffe which made it almost as cool as Harvard, only for girls.

So my buddy’s girlfriend, she went and got the girl and they came downstairs and she was… wow. She was pretty young looking but good looking, too. She was wearing some kind of dress that kind of showed her body pretty nice with a coat over it, a red coat I think but I didn’t look much after that, just at her face. I remember she had all this red hair, really nice. Anyway, I said ‘hi’ and she said ‘hi’ and my after my buddy’s girlfriend poked him, he said, well… shall we go?

Yeah! I said, pretty loud. Two thousand and one here we come. I looked over to see what this girl thought and she was kind of staring straight ahead but with a nice smile on her face and so I figured she was having a good time for now and so…

Well, you know, the Boston MTA. It has this really funny smell, different from the New York subways and Providence just has buses so… We went downstairs and we were all talking about are you hungry or not, my buddy’s girl asked the girl with me if she was hungry and she just no, and shrugged, but if you are…

I nudged my buddy, cause I wanted to see the movie pretty bad and he was the same, so my buddy pulled out the paper and showed everybody the movie times and luckily, it was time to go straight to the movie.

So we sat down, and the MTA began to move. Buddy and his girlfriend sat 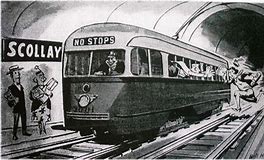 across the aisle from us and looked at us, so I thought I better ask some questions. She was really pretty, so I snuck a look sideways at her and asked if she knew any of Kubrick’s movies, but she didn’t know any of his movies or who he was, so I stopped for a minute, then said, so what’s you’re major?

She turned to look at me but it seemed like it took her a second to say anything, like she was looking at me but not really, and trying to figure something else out. But I could look into her eyes and she seemed so happy. She said I don’t know yet and looked away and waved at my buddy and his girl across the aisle and they waved back and said something like it’s too bad there’s no Charlie on the MTA today and the girl laughed once and smiled as if that Charlie was a real person or maybe not. So I asked her if she knew this guy Charlie and she said, no, she didn’t know him, but he was real at one time and he had a song made after him as a campaign ad. That’s about the most she had said yet.

I don’t remember exactly what happened but then she started to sing a song about the guy named Charlie who went riding on the MTA. She had a real nice voice. It was strange but really nice what she did and my buddy and his girl were clapping like they knew the song, so I thought okay, I’m learning something here.

Then she said, what’s your major? And I told her about how I was thinking physics but also about philosophy because really, the two are connected and that the only problem was that I said there weren’t many jobs for philosophers and laughed and she smiled and said no I guess not. Other than that, she was just smiling and looking at the other people in the train and that just about brought us to the movie theater when we climbed up out of the subway.

We went in and we got tickets and it was just in time. My buddy and his girl got popcorn and cokes so I asked my date if she wanted something, it seemed right I should to that. I guess I felt awkward because all I could do really was copy my buddy. Whatever he did, I did.

So I got popcorn and she wanted a lemonade I remember and then she saw the candy counter and asked for some milk duds, so I bought all that and we went in. It was a cool theater, old, with a lot of plushy curtains and my date seemed to just love looking all around at everything, no matter what. Like the dirt in the subway and the old people and now all these curtains and a big chandelier kind of hanging down. We went down an aisle after my buddy picked a row and we all sat in a row but when I sat down next to my buddy, he whispered why don’t you move down a couple? I guess they want to be alone together, I said and my date said yeah, probably and we sat down. 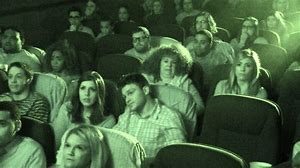 I leaned over with the popcorn and said, you know this film is really gonna be amazing! And she looked over at me, still in her coat, and looked at me again and said good, and smiled and clapped her hands. That was about it, really.

We got through the previews and the film started and it really was amazing, just like I thought, and I just stared at the screen, don’t remember it being a screen anymore, just the amazing unreal reality of Kubrick’s work and the music! Even more amazing!

When I looked over, she was asleep. She was lying with her head sort of tilted toward me, the movie flickering on her face which looked so still and peaceful, so I just sort of let her sit there, asleep. Even like that, and even looking like she was still in high school, she was a little strange, but still pretty cool, just lying there sleeping. And I really thought that movie was even more amazing than I had imagined! And that strange, cool girl asleep right next to me? And that Stanley Kubrick, boy. He was really something!

2 Responses to My Blind Date