Prompted By Mind the Gap
10 comments. 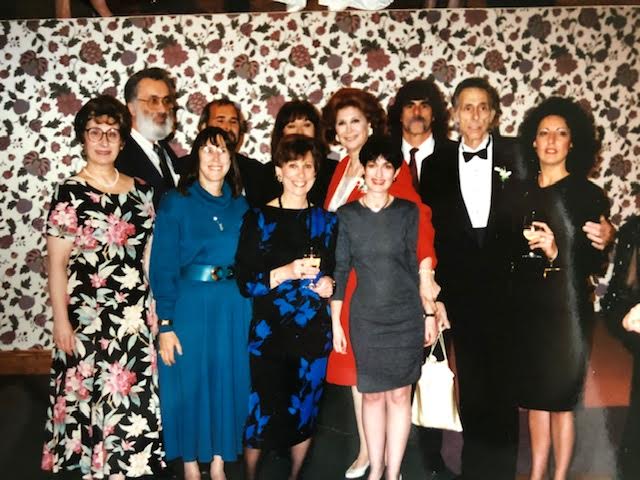 Some first cousins gather at a wedding. Standing next to Connie, one of my “mother surrogates”.

My dad was the youngest of eight children, my mother the youngest of four. They were 39 years old when they had me. I have first cousins whose children are older than me. There is a huge offset in the ages of the generations in my family, so the notion of “generations” is somewhat tricky. My father was very friendly with his nieces and nephews. Though I was much younger, I became so too, as I grew into adulthood. 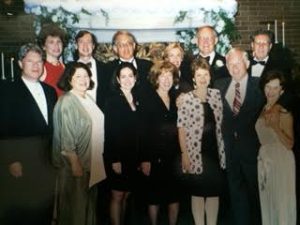 My maternal cousins and spouses at a wedding.

I remember the phrase “don’t trust anyone over the age of 30”, but so many of my relatives fit that description and they were all great friends and wise people, so it just didn’t work for me. I enjoyed being with older people and never felt out of place with them. I looked to many for comfort and counsel. 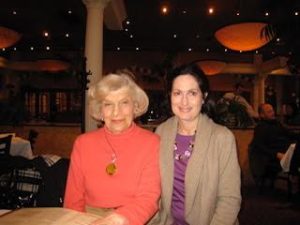 With Harriet Prentis, wife of my dad’s first cousin and one of my “mother surrogates”, in 2011. She was a docent at the Detroit Institute of Art for 50 years, bought me beautiful clothing, lived near us and I often biked to her house just to hang out with her. She was always great company.

Feeling at ease with my elders helped me when I got into sales, as so many of my clients were also considerably older. I learned to discuss things that were of interest to them (politics and religion were always off-limits, even in the late ’70s and early ’80s; just bad business).

I made a point of befriending my children’s friends too (certainly their parents, but I also liked their children). Vicki has been out of state a long time and we are now out of touch with any of her friends, but David stays close to a group of his high school friends and I follow many of them on social media. They are a great bunch of people, engaged and involved. I love to hear what they are up to as they’ve grown into adulthood. We were thrilled that one showed up at Columbia for his thesis defensive eight years ago. 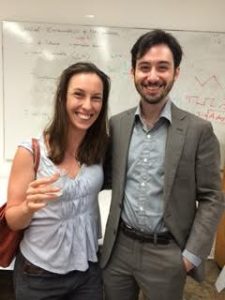 Loren after David’s thesis defense. She is tall, so squatted for the photo and joked that attaining his exalted PhD status made David grow several inches.

We were all invited when his friend Abby was married a few years ago in Cambridge. It was also a great chance for Anna to visit her American relatives (her mother is American-born). 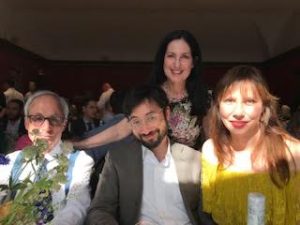 The Pfaus at Abby’s wedding 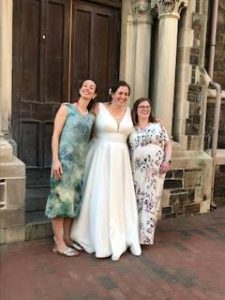 Abby with Loren and Emily, her HS besties

David’s senior year in high school, he held a marathon “Lord of the Rings” viewing party – watching the entire trilogy. I brought in pizza for the group, but also got to sit and watch with them. Their school was in Boston’s Back Bay. Everyone came in by public transportation and went out together on Friday nights, but often I’d receive a call late on Friday. He was someplace where the train had stopped running and could I come pick him up? And maybe drop a friend off on the way home? So of course I became friendly with everyone. Abby’s birthday is August 1 and a group of them wound up staying with us on the Vineyard one year, celebrating her birthday that weekend. They are great kids. We like to hear from and about them.

Aside from acknowledging that we know little about current technology and we are dinosaurs in that realm, we find little gap between the generations.

On a recent trip to London, we discussed texting abbreviations with David. He said he’d learned some new ones from his British friends like ending a text with “CBA”, which means “can’t be arsed”, as in: “can’t be bothered to get up off my arse to join you”. That one tickled all of us. He used it in context for us: “Hey, want to go for a jog this weekend?” “Eh, seems like a lot of work. CBA, mate.” But David went on to explain that “mate” would be “m8”. So we learned new lingo and no generation gap here! LOL!