Breaking the Spell by Patricia
25
(26 Stories) 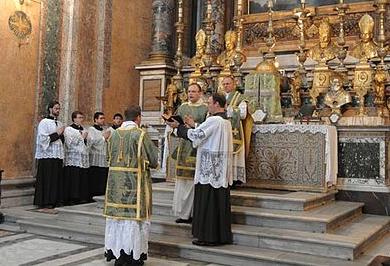 I can still remember clearly the moment I “lost” my faith—if one can be said to have lost something at age 10 or 12 that was never fully realized in the first place.

I appreciate the value of a good story, but you have to meet me halfway.

I attended a parochial grade school, so in addition to Mass on Sunday, for years I also went to Mass every day before school. I actually loved it. Nobody did theatre like the Catholic Church: the sets, the music, the candles and incense, and the costumes! I would stare at the opulent embroidery on the elaborate vestments and wonder who made such things and where did you go to buy them? I didn’t even think it was odd that the priests swished around in otherwordly outfits. That was the point after all–everything was meant to transport you to another realm.

There’s plenty of down time in a church full of little kids, and if Sister wasn’t watching, to keep from going crazy we would read the equivalent of the back of a cereal box: our school books, novels, or whatever was left in the pews. One day, during the long wait for my row to receive communion, I found a book of biblical stories to read. Catholics don’t often read the Bible and, except for the New Testament gospels, I was only vaguely familiar with the rest of it.

Now I appreciate the value of a good story, but you have to meet me halfway. Not that it matters, but I wish I could remember now which story it was. Noah and the flood? Adam and Eve? The virgin birth? At any rate, during the walk up to the altar I suddenly realized that the story I’d just read didn’t make any sense. By the time I knelt down at the communion railing, a series of thoughts ran through my head. What if that’s just a story someone made up? Could that be? Then it wasn’t true! Then none of it was true, it’s all just stories! In a flash I knew I could never suspend disbelief again. Whatever uplifting experience I had been having in church was just so much theatre.

Of course it took some time to abandon the behavior of going to church. I couldn’t tell anyone that I’d seen behind the curtain. In the ‘60s, not being a believer was on par with being gay; one simply didn’t come out. But in college I discovered science, specifically evolutionary biology and later quantum physics. I started reading popular science books. I read them voraciously, like I imagine believers read the Bible over and over.

I still do. In the natural world, I find all the majesty and wonder that I need to make sense of life. I believe that the universe is quite random—and yet here we are. I find that both awesome and comforting.

5 Responses to Breaking the Spell