Prompted By Something Wild
8 comments. 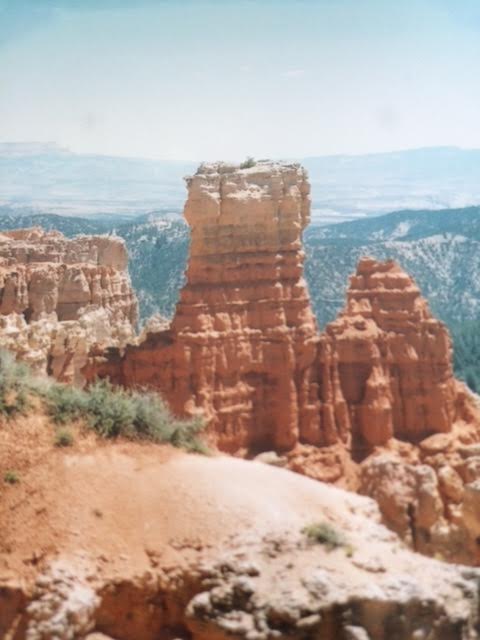 In 2003, my husband had been retired for a year. He spent that year supervising a major renovation of our Martha’s Vineyard home and planning a grand tour of National Parks in the West. Our older son, David, graduated from high school that June. Our younger child, Jeffrey, stepped up from 8th to 9th grade, so celebration and a grand family vacation was in order. We planned a three-week outing. This was challenging, as our younger child has ADD, Asperger’s syndrome (now just considered on the autism spectrum) and depression. At the time he had just finished his first year of a special education school. He also had difficulty writing. I insisted he keep a journal, his on his computer (which unfortunately, got fried in Death Valley, then he had to actually write with his hands), so I joined him and bought a beautiful blank book in Yosemite and also wrote every day, including photos in mine. I didn’t yet have a digital camera, much less an iPhone. I left room to paste in developed pictures.

We looked at Jupiter and its moons just before it set.

Reading was also encouraged. He read Harry Potter. I read John Adams. It was an unusually hot summer and both of us wither in above 90 degree weather (it was over 100 in some places on our trip; we just melted and I had been sick for months with intestinal problems), so we paced ourselves. We began in Albuquerque, NM en route to the Grand Canyon on June 28 and ended on July 21 in South Dakota at Wall Drug (trying to explain “kitsch” to Jeffrey) and the Badlands. Whew. We covered a lot of ground! We saw marvelous things, each National Park with its own character, something unique to explore, a wonderful vista, great hike, beautiful vegetation, waterfalls, wildlife, geyser.

Perhaps the wildest adventure was our lay-over in Las Vegas…”civilization”. After nine days on the road, we checked into Bellagio for some R&R and to do laundry. Dan flipped when he realized it would cost us $400 for the four of us to get clean underwear, tee shirts and shorts! That was wild! But we did enjoy the Cirque du Soleil show “O” and Jeffrey became a life-long fan. Nothing else about Vegas was remotely real. It was unlike anything we’d ever seen.

While driving to Yosemite, we saw a sign to “Manzanar War Relocation Center”, one of the Japanese internment camps from WWII. Jeffrey called out from the back of the car. He had read a book about that in class, so we detoured to tour it, took lots of pictures for him to take back to school. Not much remained; the footings for some buildings, the cemetery with Japanese markers. Grim reminders of American inhumanity. We were all moved by the experience.

A favorite was Bryce with its vermillion hoo-doos and other rock formations, all of that wonderful color. We all hiked a bit, but it was just too hot for Jeffrey and me, so we rested and let Dan and David do the strenuous work. The evening was the best. It turns out, Bryce is one of the best places on earth to star-gaze. After dinner, a Park Ranger gave a wonderful talk about the night skies. He added humor which my kids really enjoyed. His talk began with a quote from Hitchhiker’s Guide to the Galaxy, a favorite of both, and ended his talk with a Monty Python song. We then got into our cars and followed him to Bryce Point where large telescopes had been set up. There was no light pollution. The stillness lent mystery to the spectacular night sky. We looked at Jupiter and its moons just before it set.  A hundred people took turns looking into deep space. Even with the naked eye, the stars danced overhead in a brilliant show, not evident to city-dwellers. We were giddy with joy. 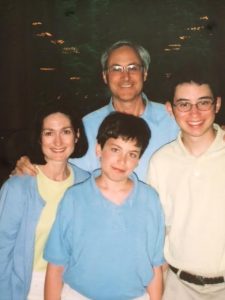