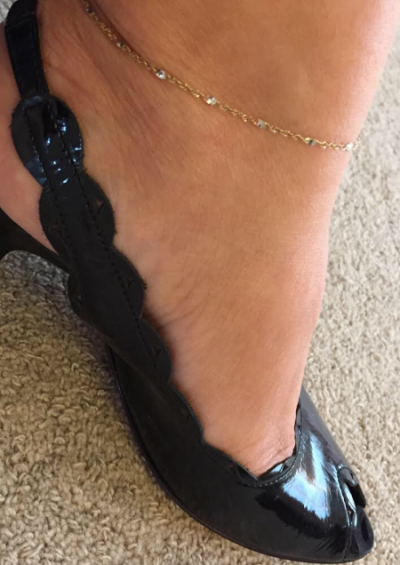 I am not a fan of accessories. I’m helpless with scarves, don’t own any belts, and dislike fussing with jewelry. The constants I wear are two rings, a necklace with a sparkly “R”, and a gold bracelet I bought on my first trip to Italy. One additional piece of jewelry I wear has a history stretching back to my early teens: A delicate gold chain that circles my left ankle.

I began wearing an anklet when I'd outgrown little girl ankle socks and graduated to cheap mesh stockings in shades of a summer tan, worn over smooth legs. I went to Woolworths and used my allowance to buy my first anklet. My sister and I both wore them, copying one of our beloved aunts who wore a fancy one that had a tiny flower with a pearl in its center, with her name engraved on it.

Tiny, flat, golden ovals—placed every half-inch or so on the chain—catch and reflect light. My glittering anklet is a replacement for the one I lost this summer when a wave knocked me over on a beach in Hawaii. Later that afternoon, as I rinsed sand off my legs and feet in the shower, I realized my little chain was missing. I’m sure the surf, so powerful it swept me off my feet, could also loosen the fragile chain and claim it for its own. The clasp had been showing signs of weakness recently, and I’d had to hunt around my house several times when I noticed my anklet had come off. I’d usually find it near my big green chair, where I often curl up, legs crossed, to read. If the chain snagged on the fabric of the chair or the couch or a sock, the clasp came undone and I’d have to retrace my steps. I’d always found it, stretched out in a line or coiled in a half-circle, ready to be placed around my ankle. I’d been meaning to take it to a jeweler to have the clasp replaced, but hadn’t made the time to do so.

I began wearing an anklet when I’d outgrown little girl ankle socks and graduated to cheap mesh stockings in shades of a summer tan, worn over smooth legs. I went to Woolworths and used my allowance to buy my first anklet. My sister and I both wore them, copying one of our beloved aunts who wore a fancy one that had a tiny flower with a pearl in its center, with her name engraved on it. She was cool; we wanted to be cool too.

After a time, our anklets—which were by no means fancy—turned green or broke, and had to be replaced. Back to Woolworths, where, if we were feeling especially flush, we would sit at the counter and order grilled cheese sandwiches and milkshakes. We might occasionally splurge and get the chains that came with a small rectangular plate where we could have our names engraved, like the ID bracelets that were the rage in those days.

Our anklet-wearing aunt showed us how to get things done. She devoted her life to civil rights, the anti-war movement, politics, and journalistic integrity. When we were young teenagers, my sister and I were each allowed to fly to Los Angeles and spend time in my aunt and uncle’s cluttered apartment where the parade of characters seemed never-ending: out of work actors, relatives, and hangers-on sprawled out on couches and on the floor, eating and drinking and arguing about everything.

I loved being with my aunt. I basked in her unconditional love and admired the way she put herself out in the world, trying her best to stop war, get the rascals out of office, and make sure the underserved received justice. And she did all of that while wearing three shades of lipstick and an ankle chain. I couldn’t do everything she did (like smoking unfiltered cigarettes and drinking scotch), but those couple of things I could do.

Last year, as my sister began to lose her fight with cancer, she started giving away a few possessions to friends and family. Julie, our youngest cousin, had come to visit for the last time, and my sister tried to give her the anklet she’d had to remove for her treatments. Julie was touched, but said she couldn’t take it, not then. So I put the anklet aside and vowed to try when the time was right. Maybe we were all in denial, and the giving away of things jolted us out of that safe place. No one knew what to say or do.

After my sister died, I gave the anklet to Julie. She accepted it then, accompanied by many tears from both of us. I don’t know if she wears it. I haven’t asked. It’s enough she has something Susie wanted her, especially, to have.

My aunt, now lost in the world of dementia, may have long ago lost her trademark anklet. In my mind, that anklet harks back to the years when she showed up at family events in a snazzy dress and great shoes, with something shiny at her ankle and lots to say. That’s the person I looked up to and tried to model. These days, she doesn’t know me, doesn’t even recognize her own son, but smiles her lovely smile at everyone. It’s been painful to watch as her vibrant personality gradually slipped away, leaving only that familiar, loving smile.

When I lost my anklet in the Hawaiian surf, I felt a loss that went beyond merely losing a piece of jewelry. Every time I looked at my bare ankle, I thought about my sister and my aunt. For several months, this lack of something—a part of me—triggered waves of grief.

This fall, my husband and I took a trip to Italy and spent a couple of days in Florence. I had a mission: to visit the shops on the Ponte Vecchio and replace the anklet that got torn away. Now, once again, I wear the small piece of jewelry that reminds me of my sister and my aunt every time I look down and see the tiny golden links that connect me to the two women I loved so much.

6 Responses to Chains of Love

Poke-Nook, the Lost Glove, and My Cousin Isly
by Dana Susan Lehrman

Holes in my head
by Charles Degelman

Bows and Flows of Angel Hair
by Suzy