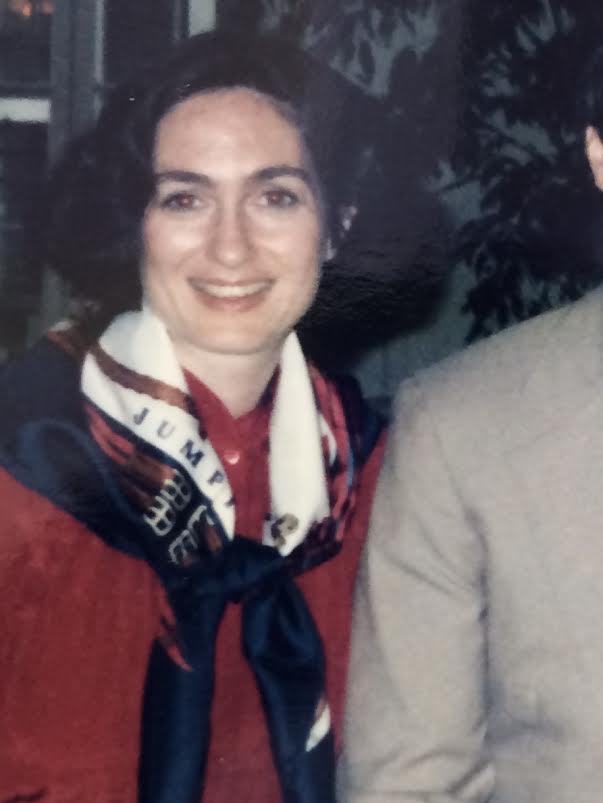 The night after my father died I received a call from an older first cousin, trying to console me. He remembered that I was a serious little girl who LOVED jewelry. Funny, but not a surprising combination, since my maternal grandfather owned a jewelry store in Toledo, OH and when we visited, I would press my nose against the glass display cases, looking longingly at the shiny objects inside. I was the youngest grandchild on both sides of the family and Grandpa gave me my first diamond ring, a little circlet of gold with a tiny diamond chip in it, when I was three. Another, slightly larger ring came two years later. They were only worn on dressy occasions, but I loved them dearly. A dainty gold watch also came forth once I could tell time. It has my name engraved on the back of the face. 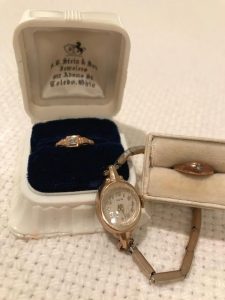 If you look closely at the lettering on the ring box, you can still see “S.B. Stein and Son Jewelers”; my grandfather and uncle. who always worked for Grandpa, and took over the store after my grandfather’s death in 1964.

When I was a young teenager, my grandmother “lost” her pearl earrings so she could get another pair and give the spare to me. Apparently neither of us had pierced ears (my mother wouldn’t let me pierce mine in 8th grade when all my friends were; after that I never bothered), as the earrings she gave me were “french screws” which I liked, as I could adjust them to just the right tension to keep comfortably on my ear lobes. I cherish those and wore those as my “something old” on my wedding day. 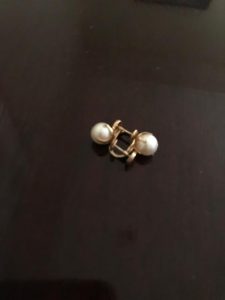 Through the years, as my many aunts traveled the world, they brought me back colorful beads and enamel pins from various countries of the world. I still have many in my “childhood” jewelry box and always enjoyed wearing the various gifts with my good outfits to Temple or when we went out to a nice dinner on vacation.

When I was Confirmed, in 10th grade, my grandmother was alive, but sinking into dementia. In her name, an aunt bought me a lovely ring with a heart-shaped garnet set with a tiny diamond beneath it. I loved that ring and wore it for dressy occasions until I left for college, when I began wearing it all the time. The following photo is on the day of my Confirmation. My parents had a large party in our house for all our relatives and friends. I’m showing the ring to my Uncle Joe who ran the jewelry store in Toledo, OH (he and other family members came in from out of town for the occasion). 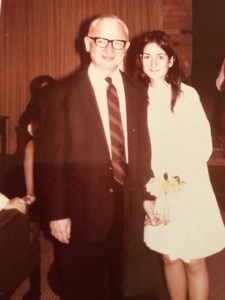 My husband, Dan, gave me a beautiful oval diamond as a 21st birthday present and to celebrate our engagement. The central stone was set with a small diamond on with side. The wedding band was white gold with three tiny diamonds (matching the side diamonds from the engagement ring) and I wore them together. Eventually, I reset the engagement stone with sapphires on either side. The pronged setting made it more problematic to wear for everyday, and I got a double row of small diamonds as the wedding band. They were both in a jewelry roll in my night stand when a heroin addict broke into our Martha’s Vineyard home 8 years ago and stole them, along with a few other, less expensive (and not insured) pieces of jewelry, as well as some medication. I got back all the jewelry except for the engagement diamond, which the thief sold in Boston. So I no longer have the original stone; that 21st birthday present. Insurance money paid for a larger one and the setting I picked allows me to comfortably wear it all the time, which I now do.

When my kids were young, I wore a Swatch, as my hands and arms were frequently in water, and they loved to teeth on the plastic watch band. When we started spending so much time on the beach, about 22 years ago, I wanted a good looking water-proof watch and wound up (due to my husband’s prodding) with a Cartier watch, which I wear every day.

Thirty years ago, I visited my mother in suburban Detroit. I drove her car and, while pulling it into the carport, I dinged the side-view mirror. We were both upset and I offered to pay for it. She told me to bring her something from Paris instead, as I was going there on vacation the next month. I bought her the Chanel purse you will see in the next photo. Upon my return, I called her from my office to tell her. I thought she’d be thrilled, but her response was, “I don’t need another evening bag”, having no idea what type of purse I’d bought for her, or how functional it was (or how valuable). She was a tough customer. She usually wore navy, so didn’t often wear black accessories. Even that was a problem for her. Occasionally, after I moved her near me, I asked if I could borrow it. She allowed it once — the day of David’s bar mitvah. She would not allow me to borrow it again the day of Jeffrey’s. I don’t know why. Eventually, as you see, I inherited it.

Years ago, I bought myself the one pair of Manolo Blahnik pumps shown in the photo. They are remarkably comfy and really do make my legs look nice. I’ve had them a long time, wore them to Jeffrey’s bar mitzvah, though had them before and still think they look great. 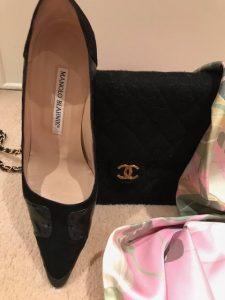 I bought the Hermes scarf seen in the Featured photo while on a trip to Paris (and the Riviera) while pregnant with David. I couldn’t try on any clothing when 6 months pregnant, but a beautiful silk scarf was just the ticket! It was my go-to accessory for the next few years. The pink one with the shoe and purse was another gift for my mother. She treasured that and looked for dresses to accessorize with it. I also bought one for my mother-in-law on that trip to Paris, but don’t know what happened to that one.

I continue with my love affair with jewelry, but mostly inexpensive pieces; colored beads, interesting pins, nice necklaces. I tend not to wear large pieces or precious stones. I have bought some interesting things at the gift shop at the Boston Museum of Fine Art. With my small frame, I am careful not to be overwhelmed by what I wear. But I do love what I own and I still love to look at anything that sparkles.

Poke-Nook, the Lost Glove, and My Cousin Isly
by Dana Susan Lehrman

Holes in my head
by Charles Degelman

Chains of Love
by Risa Nye

Bows and Flows of Angel Hair
by Suzy