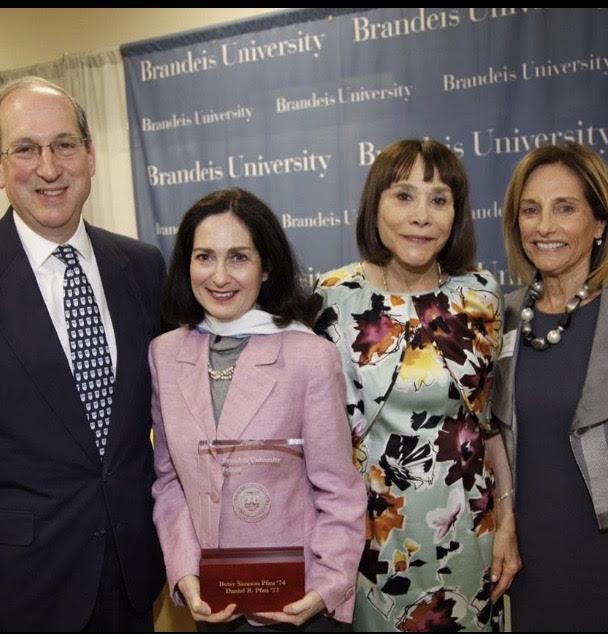 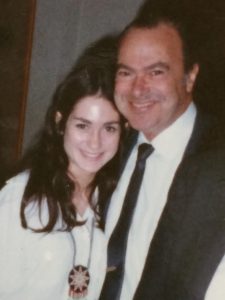 Among the bedrock principles of Judaism are “repairing the world” and “doing righteous deeds”. These inform the imperatives for social justice and charitable activities, so practicing Jews heed these and find ways to do meaningful work.

My family became more involved in temple life as my brother, five years my elder, approached his bar mitzvah. My father became treasurer of our temple and we went to services almost every Friday night (in those days in the Reform movement, services were ONLY held on Friday nights, not on Saturday mornings. The movement has swung back toward a more traditional version of the religion in the almost 60 years since then). This was the beginning of our family awakening to those principles.

My mother was always involved in Jewish women’s social justice groups: National Council of Jewish Women, Hadassah, ORT, Brandeis University National Women’s Committee. These groups had a social element to them, but also raised money for their organizations  (needy local Jewish families, hospital in Israel, the Brandeis library, etc). So as a child, I saw both my parents involved in Jewish outreach and charitable work. The example was laid out before me.

During the summer of 1970, while I visited cousins in Ohio, my esteemed uncle, Meyer Prentis, retired treasurer of General Motors, passed away. Upon returning to Detroit, my father took me, alone, to pay my respects to his widow and daughters, my father’s first cousins. It was the summer before I left Detroit for Brandeis, in Massachusetts, and my father was proud of the young woman I was becoming. Aunt Anna was in bed, prostrate with grief, supported by her four daughters, peers of my father’s. Others were in the house, as shiva was still being observed. I was 17 years old. Alone, I was brought into the bedroom to see Aunt Anna and her daughters. She sat up in bed and greeted me wanly. Her daughters, each old enough to be my own mother, were warm and pleasant to me. They knew I was off to Brandeis in a few weeks and wished me well. I was the only person allowed into Aunt Anna’s room that evening.

As Dad and I drove home that evening, he again expressed how proud he was of me, then did something he had never done before, but would become the hallmark of our relationship for the rest of his life. He took me into his confidence (which meant that I could and would reciprocate; a closeness I cherished). He had interviewed for, and was certain to become the first ever Director of the Endowment Fund for the Jewish Welfare Federation in Detroit. He was excited to move away from the automobile business, where he had spent his entire life, use his business skills elsewhere and (as he said that night), “do good while making good”. He went into philanthropy. The notion of estate planning, particularly, planned giving for charitable institutions, was brand new at the time. My father was a pioneer. He charted a path and set an example for me that I have embraced my entire life. He was happy in his new career for the remainder of his working life.

I have done much volunteer work throughout my life, but singled out the two institutions that I believe formed me to give much of my time and charitable contributions. Those are: the Interlochen Arts Center (which encompassed the National Music Camp, a place I attended for six summers during a formative period of my life) and Brandies University, my alma mater, and that of my husband and brother.

With a close friend, I began visiting camp during the summer of 1975, a year after graduating college and marrying. Together, we visited for ten summers. During one such visit, our dear friend, Dude Stephenson, director of Intermediate and High School Operetta and our mentor, asked Christie if the Playboy Foundation could fund an operetta scholarship. Christie was the CEO of Playboy. She told Dude that the Foundation funded First Amendment pursuits, not arts camps scholarships, but we went back to our cabin that night (I believe it was about 1979) and discussed it. We thought we could get a group of friends together and fund a half scholarship. She and I each gave the most money, but we did get a group together and funded the scholarship for the rest of the years that the operetta was performed at Interlochen. We named it the “Pine Tree Wonder” Scholarship, since Interlochen is in a pine forest in northern Michigan, and that was Dude’s nickname for all of us.

I served six years on the National Alumni Board, four of them as Corresponding Secretary. Shortly before I left the board, the building of a new theater was announced. A friend commented that it would be so nice if we could name something in the building for Dude and brother Jim Bob, who now was Dude’s assistant, but had been the head of University Drama when I was a camper there in the ’60s. So I went to the president and discussed it with him. He said we could name the lobby for the brothers if we raised “X” amount of money. I contacted every operetta camper I knew and I met the goal. The dedication ceremony the next year was marvelous and heart-felt. I gave a wonderful speech full of memories of both men. Here I am with Dude, Jim Bob and Dude’s youngest son at the ceremony in 1998. 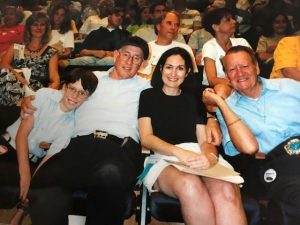 Dude taught at camp for generations. We were bereft when we received word of his passing on December 30, 2017. Though always in touch by phone, I hadn’t seen him in years and planned to visit the next summer for his 90th birthday, but was too late. Then word came that there would be a Celebration of Life for him during the camp season and most all our friends came back. I was honored to be one of two alumni asked to speak. While there, with my dance partner from our last operetta together in 1969, we visited Dude’s plaque in the new theater. Expand the photo to read it. I am so proud that I led the fundraising efforts to make that a reality. He meant so much to so many. 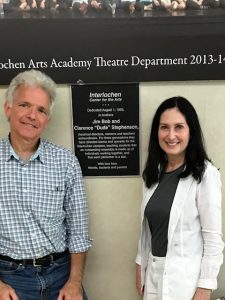 At Brandeis, I have given time and money for many, many years. My husband and I gave some sum to the annual fund every year before we focused in on our passions: the Rose Art Museum for me, the International Business School for him (he is an Executive in Residence there). I began working on reunions with my 15th and have worked on everyone since then; I co-chaired my 25th, 30th, 40th and 45th. I was the first class correspondent, serving 11 years in that capacity. I served two years on the National Alumni Board.

My main focus, for thirty years, has been the Rose Art Museum, arguably the finest collection of post WWII art north of Manhattan. I was a founding member of the Young Patrons of the Rose, and from there joined the Board of Advisors, where I have remained for some 22 years (even with term limits). There was a well-publicized crisis during the crash 11 years ago, when the president of Brandeis threatened to close the Rose and sell the art work to bail the university out of financial troubles. This did not happen, but I was asked by the provost to be the Board representative to the “Future of the Rose” committee, to chart its path going forward. I served with integrity, as I do with all my positions. As a Board member, I must give a serious contribution each year.

I served on three Art Councils. The first, chaired by Jon Landau (Bruce Springsteen’s manager) made the recommendation to form an Office of the Arts to coordinate arts activities on campus. This recommendation came to fruition some years later. The third Council, formed by that Director of the Arts, required a substantial annual gift. I was the first person he asked to be on this group and was a member for five years. Our group looked at grant requests coming from the various schools of arts (Fine Art, Theater and Music) and decided, based on how much money we had to distribute, what to fund each year. We funded a visiting professor of photography, the digitization of the slides for the FA department, hiring an artist-in-residence for a theater production, bringing in a world-famous musician to perform on campus. These were the sorts of things our group could provide. It felt like meaningful contributions for the artistic life of students on campus, which has always been so important to me, even as an undergrad, when I majored in Theater Arts, but took several Art History courses.

Shortly after my husband retired in May, 2002, we gave Brandeis some of his zero-basis Accenture stock for Brandeis to sell, and established a Charitable Remainder Unitrust. Though this generates income for us for the remainder of our lives, it is also a significant contribution to Brandeis and in many ways, brings me back full circle to my father and planned giving, as that is exactly what we have done.

As a way to recognize all that we have given and done (and continue to do) for Brandeis, Dan and I were made “Fellows” of the university in 2015. I was hooded and given a large plaque. That is the Featured photo above, shown with the then-president of the university, the head of development and the head of the Fellows program. I continue to give back and urge others to do so as well. It remains our task to leave the world better than how we found it; now more so than ever.

11 Responses to Charity Begins at Home