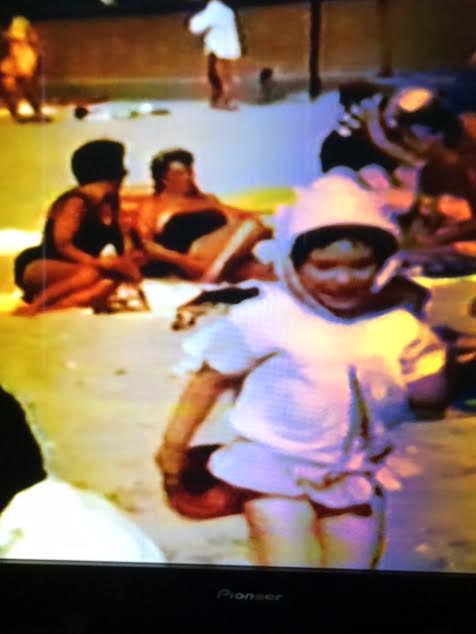 On the beach in Charlevoix, MI

Charlevoix. For five glorious summers my family stayed at the Scutt Guest House in the resort town on Lake Michigan for a few weeks in August, beginning in 1959. I believe it became quite a well-heeled resort, but at the time it felt cozy and lots of our friends and family from Detroit also made the five hour car ride, so it was fun-in-the-sun and I didn’t understand that we weren’t staying at a posh hotel. Mrs Scutt was a grandmother who had converted closets into bathrooms in her large house and found a way to make guests feel comfortable. She had a grandson my age who sometimes visited and we got along fine, running around in the large backyard during my “leisure” time.

Mornings my father golfed so my mother and I took walks into town. I bought my first Barbie doll in the general store in 1959. The store had wooden floor boards, glass cases; it truly was an old-fashioned five & dime and I loved going in there to look for treasures, my Barbie doll, being the best ever purchased. I still have it. Charlevoix also had Murdick’s fudge, which is a Northern Michigan tradition. Imagine my delight when I discovered the same fudge on Martha’s Vineyard. It seems it was founded by brothers who stopped getting along, so one left Michigan for another resort destination: Martha’s Vineyard, where I now have a home! In 1961 my brother started attending the National Music Camp, an hour away. I missed him terribly (he is five years older than me, but we are close), so mornings was also a time to write postcards to him.

After my father returned from golf, we would oil up and head to the beach. I was slow to learn to swim, so there were inner tubes, rafts, splashing around, “digging to China” (I fell into the hole once and had to be rescued). The water in Lake Michigan is cold, but the last day of our first visit, I finally learned to float! That was an accomplishment. My mother was afraid of the water. Going into the water was always with my father or other kids, who were plentiful on the beach, as was a swing set, slide, and a wonderful barrier wall. The beach was fantastic, full of bronzed bodies and friends.

Evenings, we dressed and went out for nice dinners. I remember tasting duck for the first time at the Gray Gables Inn. On a stormy day we decided to drive to Interlochen, as we couldn’t go to the beach. We got to see my brother in Romeo & Juliet. He was a Capulet servant, but at the age of 10, I fell in love with Romeo & Juliet for good.

The guest house was an interesting place. There were three unmarried sisters who always took the bedrooms on the first floor. We had different rooms on the second floor during our five stays. When my brother stayed with us, we shared a room, adjoining my parent’s room through a bathroom. When I was there without him, I stayed on a cot in my parent’s room. One year, after my brother and I went to bed, we heard a commotion outside our room. Evidently, there was bat loose in the hallway!

Mrs. Scutt hooked rugs made out of rags. She braided the fabric, then hooked it into an oval rug, much like one we had in our family room at home. I would watch, fascinated, so she let me help her, as all the guests gathered in the living room at night, in front of her inviting hearth. I brought my Barbie dolls (after 1959, I had two, and then a Ken doll as well, and lots of clothes. The three sisters thought I was cute.) So I would set up my dolls and she would hook her rug and conversation took place among the guests. Looking back, it all seemed very civilized.

Charlevoix came to be associated with JonBenet Ramsay, the little murdered beauty queen, whose family retreated to their summer home there to escape the press, but for me, it will always be the lovely destination when my family seemed happy and I was also.