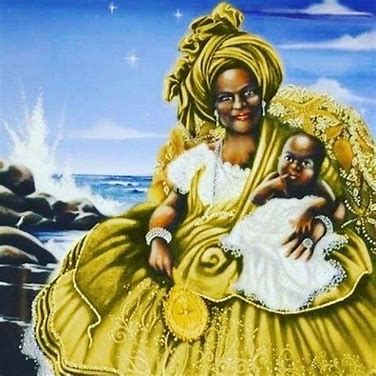 I’ve been having vivid dreams since March 19, the day that normal died. I wake up having dreamed a life of time and a universe of travel, sweat-soaked, curled in a fetal position, short hours from when I last registered reality. And already, I have oversimplified our pandemic world. Nothing was “normal” before the virus developed a mind of its own. Before our new zoonotic leader took over, we had lived under the stunning ugliness of a monster and his winged monkeys in a nation that had lost its mind. And the above mentioned “reality” clings to the surface of consciousness the way I cling to a micro awareness generated by a book or movie on the inside of an aeronautic tube when I am knifing through thin air 33,000 feet above the earth’s surface.

I awoke with a familiar mixture of covid emotions, sadness and gratitude...

These dreams are often quite beautiful in their scope, scale, and clarity. I wouldn’t define them as nightmares. They’re set in vast and complex technoscapes populated by swarms of humans. Although the humans are often adversarial, they never kidnap or harm me. Maybe the best way to describe these techno scenarios is to overlap an Amazon distribution warehouse and the streets of Portland, Oregon during the time of Trump terror, where history fails to lend perspective to the painfully sharp pivot we balance on, not knowing whether we will rise or even which way we might fall. 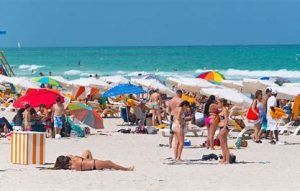 My most recent Covidream begins at a busy seashore where I stand at the back of a gypsy truck in which I roamed from commune to commune fifty years ago. The rear of the truck had been a camper and a comfortable one at that. In my dream, the back was filled with a stacked assortment of coats — hearty outdoor jackets, navy peacoats, Pendleton lumber shirts, denim jackets, Carhart workman’s coats and, oddly, several edgy leather pieces appropriate for male or female. Several friends from my past stood around the truck, trying on coats, commenting on appearances, laughing. One by one, they left, thanking me for their new outerwear and leaving me alone with my father.

Now this is, in itself, extraordinary. My father has been dead for longer than he lived, and he rarely appears in my dreams. But now we sat on the tailgate of my truck watching the surf break offshore and talking about the corona virus, discussing how it has risen from the imbalances we have created on the planet; how it possesses an ability to strategize, to travel, to change, to adapt. We talked of its chimeric qualities and mysterious behavior, how it first seemed to attach to the respiratory system until it began to appear in the fringe areas of the human body, where blood danced with oxygen or shed its toxins in the liver and kidneys, in the capillaries of the cerebral cortex, the eyeballs, any place where the tiny tributaries of our vascular system ended in narrow backwaters where the covid protein could anchor and embrace human cells. 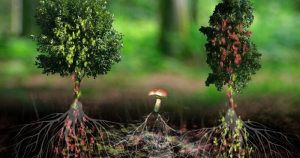 We tried reconfiguring the corona virus, to invest it with a vitality that might include vengeance. Wasn’t it possible, given the discovery of macro organisms — did you know, for example, that a grove of aspens is not a series of individual trees, but one large creature? That the entire floor of a forest is connected across distance and species by a network of mycelia that allow the forest to talk to itself? Isn’t the virus floating down the Amazon the way ants launch leaves to cross a stream? Isn’t it possible that the virus is one great creature, sent by the planet to rid itself of human scum?

We weren’t the first people to imagine this possibility, my father and me. A group of Yoruba priestesses are currently approaching the earth mother to argue that there are plenty of good humans on the planet and that she can easily distinguish between the good people and the pricks. Couldn’t she order the virus to spare the good people and take the bastards? My father, always empirical was skeptical, and I had to admit that so far, the priests hadn’t been able to contact the earth mother’s sister, Ogun. Ogun was known to be quite impulsive, egotistical and self-righteous; she often took holidays from her caretaking duties and her generous capacity for compassion. The priests allowed as how Ogun might not currently be taking calls.

Now, please understand. Neither my father nor I are fond of subscribing to a bum-trip worldview. That would hardly be dialectical, and both my old man and I subscribed to the belief that opposites seek equilibrium, that thesis and antithesis generate synthesis, and that science does reveal great beauty in the universe. Our covid speculation had saddened us both. I decided I would go for a run along the shoreline to restore my balance while my father relaxed in the back of the truck where he would smoke his pipe and recall his days as a merchant sailor.

So, after donning my mask, I set off for a run along the shore, only to come immediately up against a wire mesh fence of the kind usually erected to keep deer out of the garden or to corral a mean-spirited urban mastiff or pit bull. Behind the fence, thousands of swimmers and sunbathers frolicked in the breaking waves or basked in tiny bathing suits. No one wore a mask. Everyone seemed to enjoy interacting in the most intimate ways with each other. I was disturbed, but I continued on my way, although my mask did attract attention. 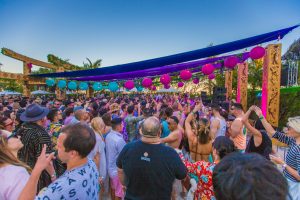 Behind the private beach lay a labyrinth of boathouses, restaurants, bars, spas, and other facilities, all designed to expedite pleasurable interaction. I dodged in and out of these rooms and hallways, always finding a path that led me parallel to the beach, hoping to find a deserted stretch of the shoreline that wasn’t fenced off for profit. Finally, I came to a massive breakwater, where bathers were soaking and playing with their children in the shallow water. It reminded me of the shallows of the lake we were forbidden to swim in during the height of the polio epidemics that would descend upon New England in August. It seemed dangerous to me, this lazy crowd in the warm, shallow water, but when I tried to approach the bathers, they turned a deaf ear to my ministrations or told me to buzz off and take my mask with me. Several of the bathers took up quacking at me, I suppose because my mask made me look like a duck. 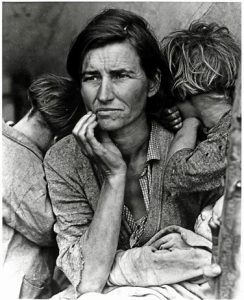 A woman approached me, very sweet and gentle, like one of those kids in school who would befriend a kid who was being bullied. She was as generous of body as of soul, both barely  contained by her bikini. She had five children with her and added that she was pregnant with twins. She asked me if that meant she was a septuagenarian. I told her “no” but did tell her that she had one famous precursor, the woman in Dorothea Lange’s pictures of the Great Depression. We spoke for a few moments about the possibility that she and Dorothea’s careworn mother of seven were doppelgangers, but the surf was breaking steeply on the shore and the blue water had turned to steel.

I bid her a socially distanced goodbye and turned back. I recollected a time when my friend Roger and I had left my father behind on the beach while we explored the lake in a small motorboat that my father had generously helped me resuscitate and paint. He had been very sad when I returned to shore. I didn’t want to repeat that kind of abandonment. I began to work my way back up the beach, overcoming all “private beach” and “no trespassing” signs I encountered. The sun had begun to move toward the western horizon and the shoreline, the restaurants and bars, the yacht basins looked alike.

Unmasked people surrounded me, inviting me onto this yacht or into that restaurant and bar, daring me to unmask and “show my pretty face.” The journey began to take on a repetitive, nightmarish quality as I searched in vain for the landmarks that had marked the beginning of my shoreline run hours earlier. Finally, I saw recognized a stretch of barricading wire fence. There was the familiar outline of my truck. I lurched up the beach, shouting my father’s name and apologies. I arrived at the truck as the lower lip of the sun touched the horizon. My father was nowhere to be found. Before I allowed myself to grasp that I had lost my father once again, I awoke with a familiar mixture of covid emotions, sadness and gratitude, eager to accept the waking reality I had so recently left behind, my partner and two cats asleep beside me.