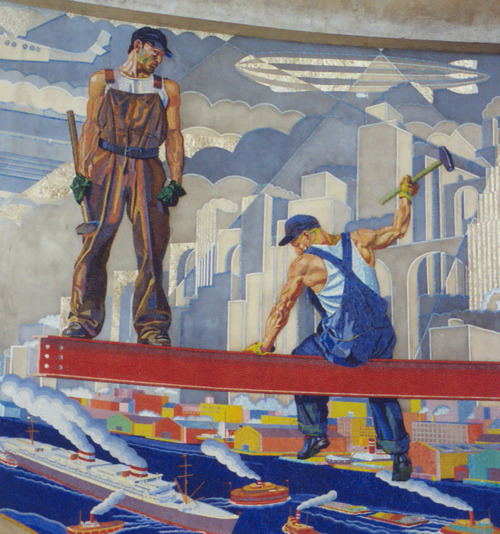 I’ve been a worker all my life. My love affair with work began as an adolescent in a loving family fraught with jeopardy. My father suffered from manic depression, my mother danced between spousal caretaking and denial. McCarthy’s blacklist pursued my old man. My parents sold our modest house on the lake in a bucolic Massachusetts suburb but, before we could take ownership of another home, mortgages collapsed, my father’s sketchy employment dried up, and — figuratively speaking — we became homeless.

We were not without friendship or support. For two years we lived at the good graces of a retired doctor with a stately hillside manor and a kind-hearted Quaker couple who ran a youth hostel. But the failed house swap, my father’s mental condition, his sketchy work options and the move to a new town, a new school filled my life with shadows I could not identify. I began to toughen myself to confront a struggle for survival.

I decided to earn money, “just in case.” So, at eleven, I began to work for a local farmer, picking corn, apples, and potatoes, hayin’, and working in big old barns comforted by the warm-bodied contemplation of cows chewing their cuds. They smelled of molasses and manure.

Work became my armor, my fuel, and my identity. I imagined work in masculine terms. In high school, I worked after school and Saturdays in a machine shop. Pragmatic, yes, ecstatic, too, building stuff — producing — working with a high school pal on lathes, drill presses, welding machines, grinding wheels, romanticizing the grimy parade of American industry in the years of Eisenhower, Kennedy, and a booming Detroit.

I half-dreamed, half-realized a rich life as a budding actor and musician. Jazz, folk music and rock and roll played a counterpoint to the music in my family and I learned to sing in church. Still, my poverty paranoia ground on, binding me to a work ethic and the labor theory of value, a notion that the hours worked, the product produced, whether it be pounds of picked apples, notes played, scripts acted, or words smithed carried more significance than the pleasure of life.

Turmoil ruled, civil rights and U.S. Out of Vietnam swirled in the streets. I landed full of outrage, sarcasm, and political savvy right in the middle of the Haight-Ashbury district.

Oh, we had fun, not to worry. But I was no hippie. I had joined the denizens of San Francisco’s beat-heavy, anarcho-utopian post-dada art scene and set out with my comrades to develop a radical theater. We borrowed from Brecht and commedia dell’ arte to create madcap caper-heavy shows staged outdoors for free in the parks muthafuckah!

I’d never experienced such a heaven. All the pieces fit: I evolved into a political animal, in love with a theater that loved me back. The artists I met were talented, ingenious, utopian, crazy, and directed. I absorbed each significant saturated work hour as skill and wisdom. Hard work.

I was excited, giddy, and grateful. I could vent my anger at the injustices of the present, safely strapped into my work ethic while the road rocketed ahead at the speed of a commedia scene. “Turn on, tune in, drop out” suffered our contempt. I was working. No matter that I made $25 a week out of the hat, everything I needed was free. I happily toiled away in a myopia of engagement, commitment, and fresh air.

I’ve counted the chapters in my life — a childhood in jeopardy, darkness and discovery during adolescence and the teens, public school, private academia, community organizing, theater, collectives in the Rockies, Massachusetts, Maryland and humboldt, carpentry, cutting mine timbers with a chain saw to crafting fine cabinetry, more theater and music salaried by an arts commission, a major migration from one city to another, more music and theater, a decade-plus immersion in publishing, theater production, a return to the typewriter and — rapidly thereafter — the cybernetic word processor. Two novels, five screenplays, acres of short stories, travelogue and memoir, two feature-length documentaries, more political theater, piano trios at the Ritz, punk cabaret noir, two continental circuses (no caged animals), vaudeville nouveau, a master’s degree at 63, a decade of university teaching, cranking it out, cranking it out, cranking it out. Surviving, ecstatic, terrified, making my way, always with remarkable partners, improvising in duet.

Now, it’s beginning to fall away. Despite my instincts, work as a driving force has slowed. A glowing new confusion has set in. If I’m not ‘cranking it out,’ what the hell am I doing? Why am I rushing to finish chores? To make time for…? I like the feeling. I don’t want to show up anywhere. I don’t feel like reciprocating. I’m confused by what reads as lazy but is not.

The confusion began with castigation. Why aren’t you writing? Time’s wasting! Light up your media presence, teach more classes, hit the workshops and lit fests, push hourly life aside to get to the means of production, the means of distribution. It’s nearly impossible to believe that I’m okay. Where will the money come from? Will income and expense trip and fall or dance in harmony? Shouldn’t you be…?

But I’ve been hearing different voices of late: Give yourself time and space; you’ve cultivated civilization’s practical toolshed, information, skills, experience, social purpose, a room of one’s own, a house, a garden, a variegated circle of friends, smart kids to teach, my own colorful past, a hit-and-miss tapestry of calamity and adventure, battle and beauty.

I’m grateful for what I’ve done with my life, humbled by my obsession with the common good, comfortable with rage and acceptance, confident that I’ll cartwheel into the next chapter, cranking it out in a new direction to a different tempo, with a different purpose and an unfathomable result. I can wait. The future will bring it.

Is this retirement? I ask. Nah.

Wisdom in the Weeds
by Dana Susan Lehrman