Prompted By The Crush
19 comments. 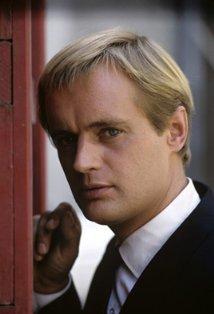 In my hormone-driven early teens, my heart belonged to a blond secret agent name Ilya Kuryakin.The handsome man with an accent you couldn’t quite place but you guessed was supposed to be Russian, what with the name and all, fought evil side by side for an hour every week with a James Bond wannabe named Napoleon Solo, played by Robert Vaughn. In my book, Ilya was by far the more fascinating of the two men from U.N.C.L.E. on the show that ran from 1964 to 1968.
During the ’60s, a friend of my dad’s reviewed TV shows for the local paper. He thought I might be interested in reading about the new fall lineup, so he gave me his  press kit magazine which was full of glossy publicity shots. I flipped through the actors’ photos and stopped cold when I got to the picture of Ilya—that is, David McCallum—looking right at me with those soulful blue eyes. They were so blue, so piercing—I felt like he was looking at me the way I was looking at him.
I taped his picture to my closet door, next to John, Paul, George and Ringo. I watched the show every week as the two secret agents outwitted their evil nemesis,THRUSH, which stands for something but I don’t remember what. 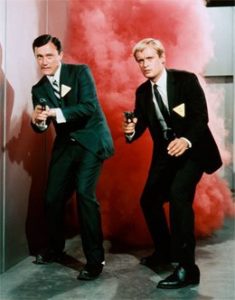 David/Ilya got all the best lines. He seemed content to be a sidekick, but I always thought he had a much more interesting personality than the suave Solo, who never made my heart flutter. Those eyes, the black turtlenecks, the bon mots and literary references…Ilya was smart and sexy and mysterious.

Now David, correct me if I’m wrong here, but in one episode someone asks Ilya if he is married, and he responds by quoting the first line of a poem entitled “To His Coy Mistress” in that charming accent of his: “Had I but world enough and time….”

I don’t remember anything I learned in my in my 8th grade English class, but I never forgot that line. And now that I’ve read the poem…hoo boy!

The show went off the air, life happened, years went by, and I lost track of my long-ago heartthrob. Then, a couple of years ago, I happened to stumble across “NCIS.” It’s not the kind of show I usually watch. (Naval Criminal Investigation Service? Not my cup of tea.) But there was something familiar about the medical examiner—the guy wearing blue scrubs and rubber gloves, waxing poetic over a cadaver—a character referred to as “Ducky.”
Could it be? That same where’s-he-from accent, the slight bangs—not really blond anymore but you can tell he used to be—the guy who always gets the best lines even when he’s speaking to a corpse?
Yes, it is the one and only Ilya of my teenage fantasies. How could I have not known about this? The show’s been on since 2003! But, I wondered, why is this enigmatic former spy-turned-medical-examiner called Ducky? It didn’t take long to figure out: it’s because his character’s real moniker is Donald Mallard.
Of course it is. And he really rocks the bow tie, right?
David McCallum is now well over 80, and so what?
This fan says: You’ve still got it, Ducky!

I’ve Got A Crush on You
by Suzy