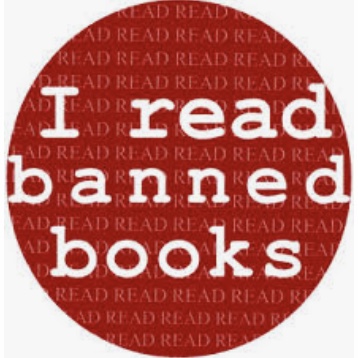 I read banned books – to protest their banning of course,  but also because they’re invariably such good reads!

As you may know,  countless modern classics have been banned or challenged at one time or another,  among them The Adventures of Huckleberry Finn,  As I Lay Dying,  Beloved,  The Catcher in the Rye,  The Color Purple,  The Good Earth,  The Grapes of Wrath,  The Great Gatsby,  The Handmaid’s Tale,  Heart of Darkness,  Lady Chatterley’s Lover,  Lolita,  Lord of the Flies,  Naked Lunch,  1984,  Of Mice and Men,  One Flew Over the Cuckoo’s Nest,  The Satanic Verses,  To Kill a Mockingbird, Tropic of Cancer,  The Unbearable Lightness of Being,  and Uncle Tom’s Cabin.

And of course the book often called the greatest novel of the 20th century was banned,  deemed pornographic,  and the subject of a famous 1921 censorship trial –  James Joyce’s masterpiece Ulysses.   (See  My Love Affair with James Joyce)

In a fascinating work entitled The Most Dangerous Book: the Battle for James Joyce’s Ulysses,  Harvard professor Kevin Birmingham discusses the writing,  legal fights,  and eventual publication of that amazing and revolutionary novel.

But are banned books – like Ulysses – really dangerous?   I guess you’ll just have to read them yourself and decide! 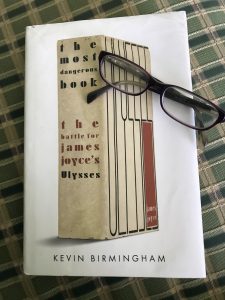