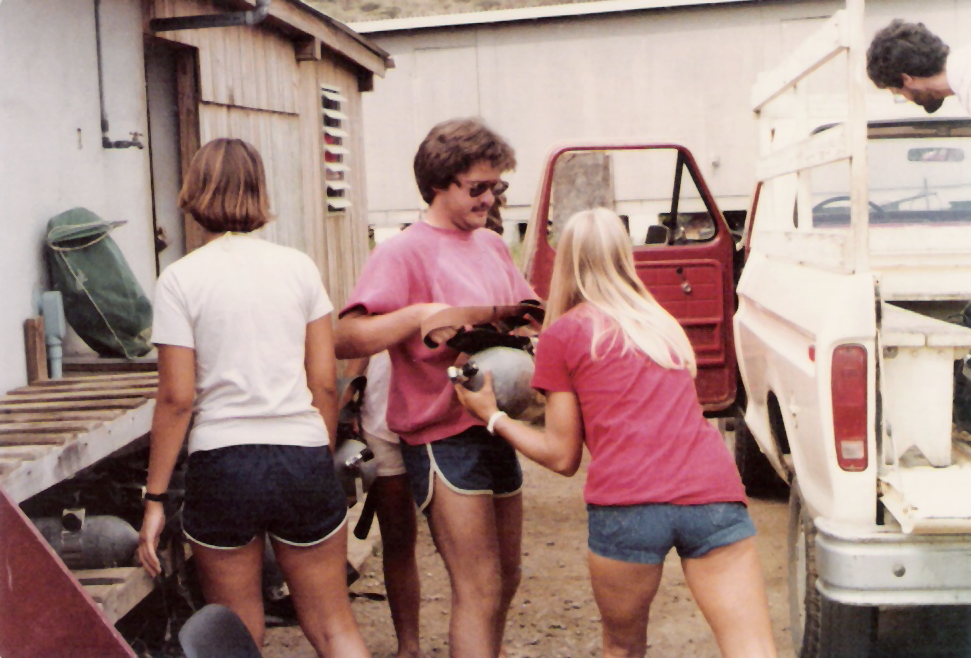 Marine bio students loading up for a dive. Holly is on the right.

(Writing the first story on this prompt reminded me of the incident in this one, which occurred about 18 months later. Looking back, I really was lucky to survive my diving days! I also think that if adolescence is hard, transitioning out of it might be harder.

"If I left her, if I followed my dark muse into the deep sea, there was a good chance that, one way or the other, Holly would die."

If it’s not kosher here to publish two stories on one prompt, let me know and I’ll pull one.)

We landed on white coral sand at one hundred and sixty feet.

Holly and I had dropped down through a sort of slot in the reef face, a rectangular vertical groove lined with sponges and corals. Shoals of small fish circulated among the outcrops, trying to avoid the notice of the less numerous but larger predators that frequented these rich hunting grounds. The subtropical sun brought out all the myriad colors in the shallow waters when we began our descent, but as we went deeper and the water progressively filtered out the shorter wavelengths, everything faded into a purplish-blue. The spiky corals nearer the sun gradually gave way to flatter, palmate species more able to gather the fading light.

Where we landed was not the bottom. We stood at the base of the reef wall, and at the edge of infinity. From here, the world sloped downward, at fourty-five degrees or more, into infinity. St. Croix is a mountaintop, and the valley to the north of the island is nearly three miles deep. Between us and Vieques, twenty miles away, there was nothing but an abyssal plain.

Air goes fast at these depths. Time was short; we took in the view.

I could see small, isolated outcrops of coral scattered across the sandy slope that led down and down and down. These patch reefs, as we called them, were little islands of abundant life in the relatively sterile sea of sand. Lobsters, reef fish whose gaudy colors would be revealed by my flashlight, moray eels and the occasional patrolling shark or ‘cuda could be found on the patch reefs.

I could feel that my thoughts were fuzzy, muddled, slow. I had above average sensitivity to the narcotic effects of nitrogen at depth, and were were deep enough that we’d have to fake our log book entries again to avoid the wrath of the lab’s dive master. Last time it had been the fear and paranoia of a “cold narc.” This time it was the good kind, the classic “warm narc” that Cousteau wrote of years back. A befuddled sense of well being and benevolence filled my mind.

The first patch reef was close, only a few dozen yards away. And down, always down. There I would be able to see many fish. Maybe a shark. Past that there would be more reefs, more fish to watch, more fascinating sea life. It seemed so beautiful down there, and calm. Peaceful. I wanted to go see and learn.

Somewhere in my nitrogen-befuddled mind there was also the dim realization that if I went any further, I would not come back from this dive. It had happened before. A narcotized diver would just keep going down, past his companions and past any hope of rescue. One had actually been tracked by dive boat sonar going past 200’ and still descending. Most were never recovered; it was deemed too dangerous to try.

But that really didn’t bother me. Maria had finished with me last year, after we had shared so much, fought so hard not the be separated. A couple of other relationships had failed quickly after that. I was obviously destined to be alone, so why not swim away and learn what the Deep had to teach me? It seemed like the best plan, maybe the greatest idea ever. If I had hit my peak at 21, why not keep swimming?

Something touched me on the shoulder. I looked over; it was Holly. Her blue eyes were wide behind the glass of her dive mask. She looked nervous, afraid. Her long blond hair had come undone and drifted Medusa-like around her head. In this light it looked much darker than it was, almost brown. She shrugged her shoulders as she made the “up” signal. She wanted to surface. This annoyed me a bit; I wanted to keep exploring!

And then through my euphoria I realized that if I went out there into the nothing, Holly would almost certainly follow me. Dive partners stay together, look out for each other. We were each other’s only hope in case of a problem. Even if she didn’t follow, the long ascent alone, upset and afraid and needing at least a safety decompression stop, was in itself dangerous. Moreover, I was what we called at the lab an “A-list” diver, one of the ones with a lot of experience and training. Holly was B-list; relatively inexperienced. For their safety, B-list divers were always paired with A-listers. I was responsible for Holly’s life. If I left her, if I followed my dark muse into the deep sea, there was a good chance that, one way or the other, Holly would die.

I nodded and returned her “up” signal. We started toward the surface, slowly. It was time that we both returned to the sunlight.