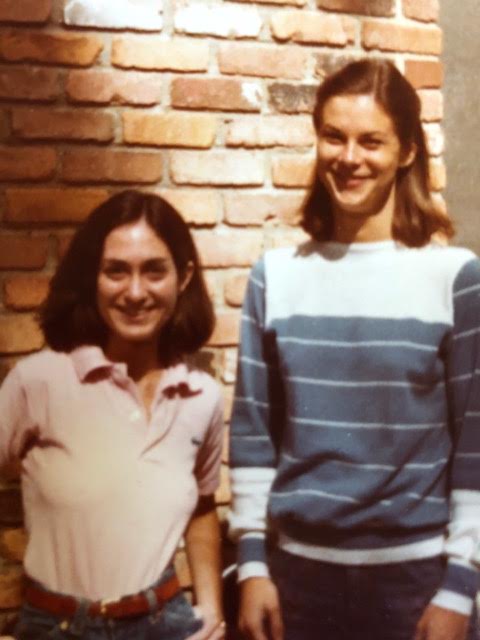 During my 16 months in Chicago in the late ’70s, I lived in a structure known as a “4+1”, as it had parking under the building, then four floors of apartments above, on the north side of Chicago, off of Sheridan near Lake Michigan. The building was H-shaped and I lived all the way at the end of one of the floors. It dead-ended at my small, one-bedroom apartment. I have few photos from that era. The Featured photo shows Christie and me at my home in Huntington Woods, MI. My dad threw a great 65th birthday party for my mom the night before this photo, then Christie and I flew up north for our annual Interlochen/National Music Camp visit.

I was new to sales and my manager took a gamble to hire me, so I worked hard to prove myself. Week days were spent making calls in front of customers, usually requiring travel. Saturdays were for me. I took a ballet class in the morning, then sometimes had lunch at a great deli in Water Tower Place and might see a movie. Sundays, I put in several hours of work, doing all sorts of paperwork, frequently in the office. I did my time sheet, call notes for each client contact that week, a follow-up letter for each client call, and frequently, a proposal coming from a client situation. All of that would be left on my secretary’s desk; work for the next day. If the weather was nice, I’d walk the several miles back to my apartment.

On this particular pleasant Sunday, I walked into my building with no one else around. A tall, lanky, young fellow got on the elevator as I entered. He was already in the building. He got off on my floor. I had my briefcase with me and fished in my purse for my keys. I didn’t pay much attention to him, turned to walk to the end of the long corridor to my apartment.

I had to turn three different locks to get into my apartment. I got the first key into the first lock, but I caught some movement out of the corner of my eye. It was the tall, lanky kid. He stood close to me and now had his pants pulled down, exposing his private parts. His hand shielded his privates from the hallway, but I could see everything quite clearly. He was grinning at me, less than a foot away from me, as I floundered for my keys.

I felt panic rise in me; what if he jumped me? No one was around, we were at the end of the hallway, no one would hear on this late Sunday afternoon. I am tiny. I weighed 84 pounds at the time. He was tall, I couldn’t fight him off. I quickly fumbled for the second, then the third key and opened and CLOSED my door, my heart racing. I put the chain across the door. I swore I would never use more than one outside lock again. There was nothing of value behind that door; let anyone take anything, just let ME get IN as quickly as I wanted.

I called the police. They said they’d come quickly. Moments ticked by. Christie was on her way over and I had no way to warn her. We were going out for a quick bite to eat before going to a chamber music concert that evening. I could see the headlines screamed across the front page the next morning: HEF’S DAUGHTER RAPED IN NORTH SIDE APARTMENT! She worked for her father at that point, but wasn’t yet CEO, so wasn’t as well known as she came to be.

Two uniformed policemen buzzed my apartment and I let them in. They were kind and reassuring. They took the boy’s description and said that type usually is a thrill seeker and not harmful. I had calmed down enough to crack a bad joke, “I don’t know whether to be relieved or offended, but he wasn’t hard.” They liked that. I told them that I lived alone and traveled a great deal, coming and going at all odd hours. And that Christie Hefner was on her way over right then! They assured me they would put extra patrols on my street for some time to look for anything unusual on the block. What really worried me was I didn’t know how the kid got into the apartment building. He did NOT enter with me. Did he live in the building and would he continue to stalk me? That thought haunted me. The police reassured me that this was unlikely. He had probably gotten in earlier, just waiting for an opportunity like me to present itself. I felt better, somewhat reassured. They were professional and very kind.

By the time Christie showed up, I had calmed down. I told her the whole story. She soothed me. We went out to dinner, I even had a glass of wine; we enjoyed our concert. There is nothing like a great friend to be with you when you need one. Christie and her family were my family during my stay in Chicago. She has always been there for me.

18 Responses to Scared on the North Side