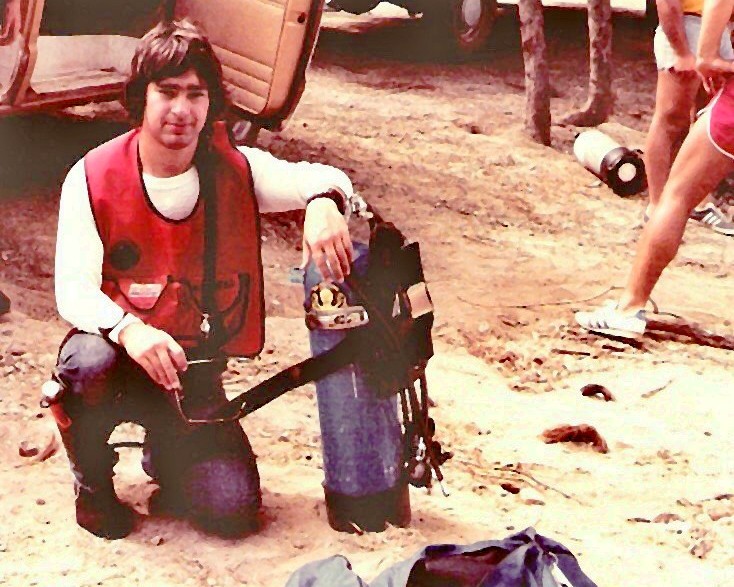 In the summer of 1976, the ocean off the coast of New York and New Jersey died. It almost took me with it.

A sulfurous smell of decay seeped into my mask. I looked around in vain.

I used to SCUBA dive. My passion was shipwrecks. I started when I was sixteen. When other kids bought cars, I bought a new regulator, or a set of double tanks for deeper dives. I saved my nickels for dive boat fares. It was the first sport I was ever good at and it tried to kill me three times. Maybe four. This was the first time.

I was diving on a wreck off the Jersey coast called the Mohawk. With me were John, also an experienced diver, and Maria, my then-girlfriend, who was quite new to the sport. This was her first time on a dive boat. It was a warm and lovely summer morning. When we arrived over the Mohawk, I geared up fast and hit the water before the hot wet suit and rocking motion made me sick. I hung onto the anchor line until my companions joined me. We all signaled OK and together went down the anchor line which would lead us to the Mohawk.

About seventy feet down, I saw the bottom about ten feet below us, the wreck sticking up from the sand, and a diver coming toward us up the line, which should have struck me as odd but didn’t. So I motioned that we should just drop off the line to the sand and swim to the wreck.

I let go of the line and sank to the bottom. And right through the bottom. It wasn’t sand at all.

Covering the ocean floor to a depth of ten feet and more was a thick layer of suspended decomposing organic particulate matter, the remains of myriad millions of fish, lobsters, starfish and other marine victims of what became known as The New York Bight Anoxic Event of 1976. The bottom waters had been nearly depleted of dissolved oxygen. What could swim away, did. Everything else was dead or dying.

When I finally did hit the sand, I could see nothing. It was like being immersed in skim milk with a bit of Bosco in it. A sulfurous smell of decay seeped into my mask. I looked around in vain. John and Terri might have landed three feet away, or thirty yards, for all I could tell. I decided to head for the wreck; maybe I could climb it and get above the murk.

I only started to get frightened when I swam headfirst into the side of the ship. Or a piece of it; the Mohawk was more a huge junk pile than the ocean liner it had once been.

I quickly realized that this was crazy. I had to get above the murk to have any chance of finding anyone. I started swimming upward, in a slow, controlled fashion, and hit my head on an obstruction above me.

I realized that I had accidentally, blindly, swum inside the wreck, in zero visibility.

A diving axiom is that if you panic, you die. Eighty feet down, unable to see and no ready way out, I could feel the adrenaline trying to overwhelm my mind and send me thrashing out of control, either to get hopelessly tangled in loose debris, or blunder deeper into the Mohawk. Panic is the opposite of thinking, and I had to think if I was going to see my twenty-first birthday.

I stopped moving, closed my eyes, and mentally took stock. I had plenty of air left, which meant time. time to work the problem. The way I came in should be slightly brighter than…all the other alternatives. I left my eyes closed and counted to sixty, in hopes that this would make my eyes more sensitive.

I opened them and looked warily around. There did seem to be slightly more light in one direction. That had to be it. Slowly, in case I caught on something, I swam toward the brightness, and the light increased.

The murk rapidly got brighter. That was a happy feeling. I had been, probably, no more than five feet or so from open water. When it seemed that it was as bright as it was going to get, I cautiously started up, an arm above my head, mentally preparing myself for the horror of running into another steel ceiling.

Emerging from the milky tan gloom, the clear Atlantic water was as lovely a sight as I had ever seen.

I had no idea where Maria and John were, but my air supply was surprisingly low. I had done a lot of breathing in a short time. I had to surface. I saw the anchor line not far away, and made my way back to the dive boat. They were not on the boat. I had to wait an anxious twenty minutes until they returned. They had managed to stay together in the murk, and had spent their dive looking for me. We all laughed. After lunch, the captain relocated the boat to another wreck, hoping for better conditions.

I skipped the second dive.

6 Responses to Lost and Found