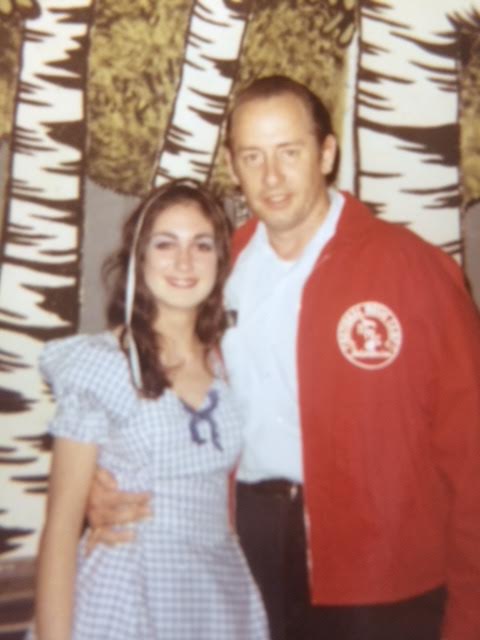 I met him when I was 9 years old. My older brother was Nanki Poo in the Intermediate production of MIKADO at camp that summer. Clarence “Dude” Stephenson directed the Intermediate and High School productions of Gilbert and Sullivan operettas, as well as other plays and musicals at the National Music Camp (now Interlochen Arts Camp) for 57 years. He became my teacher in 1965 when we, again, performed MIKADO as Intermediates. I was in the chorus, as I was all five summers that Dude was my instructor. I always tried out for a lead, but my voice wasn’t good enough. No matter; all performers were treated with dignity.

Dude made being in the chorus fun and important. He learned all our names (and in High School, there were a LOT of us, maybe 90 women, 30 men) within the first week of camp. That’s quite a feat, but it taught us that we were important as individuals. He lined us up according to height. Since I am petite (a euphemisim for TINY), I was usually the chorus leader, with the extra responsibility of knowing all the cues, as I led everyone on and off the stage. By my second summer, I had the responsibility to take attendance in class. Dude saw I had a flair for the acting stuff, so he gave me (and the other theater people) extra little bits to do.

We flocked to him. He was everyone’s favorite. In High School, Operetta was a “minor”, so even non-majors could participate. We met for 50 minutes, five days a week, late in the afternoon and music majors delighted in performing with the die-hard drama majors. It was just pure fun. No matter how many times Dude performed the G&S catalog, he found inventive new ways to move our large troupe around the stage and gave us funny new bits to perform. We all adored him and vied for his attention. He never missed ANYTHING! Watching the first performance from the light booth of our large performance venue through binoculars, he’d give notes before the second show. During PRINCESS IDA, he commented that I had pushed my Twist-o-Flex watch band way up on my arm, under my graduation robe in Act II, but had looked at it once! He caught me! We all had fun, as long as we took our task seriously.

I learned that being part of a large ensemble didn’t mean one could hide. I still had to do my best, because everything was noticed, we had to work together to shine, though I could still show my own personality. That was an important life lesson. Dude rewarded me by granting me the Operetta Chorus Award all three summers that I was in High School division, and years later, the best female chorus member for the first 25 years of Operetta. I was honored and humbled. 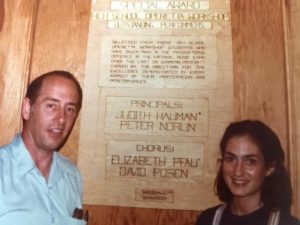 1969 was my last summer as a camper at Interlochen. In December, I sent out my usual group of holiday cards to all my camp friends and teachers, including Dude, telling him I would not return. Honestly, my father couldn’t afford camp and tuition at a private Eastern university in the autumn.

But Dude wrote back. I still have the letter, now 48 years old. It reads: ‘Jan. 1, 1970, Dear Betsy: It’s unthinkable that there won’t be a Sarason at camp this summer — particularly a Betsy Sarason. How can I do without you in Operetta? You know, operetta has never been one person, but it has been a number of people whose value to the group far out-weighs that of the general number of the class. You’ve been a member of the special category every summer – always willing, always dependable, always outstanding in achievement. Both Father Ken [Jewell – music director] and myself have deeply appreciated your contributions to the shows that we’ve done together – I hope you’ll reconsider and return to Interlochen –Remember that you’re young only once, and the years of youth are few; your opportunities to take part in that wonderful something that NMC offers are relatively few. Come back…   My love to you – “Dude”‘

This was a man who cared about me and told me so. In so many ways.

Christie, my friend since 1965 Intermediate Girls Cabin 5, and I decided to vacation at Interlochen in 1975. We arrived late afternoon, shortly before the Operetta opening night. We found many familiar faces, but not Dude’s. We knew he and his wife of many years, the mother of his first five sons, had recently divorced and he was hurting, so we particularly wanted to see him. We waited for him on the dock behind Kresge, knowing he would come to talk to his cast before show time. We saw the familiar crepe-soled shoes round the corner. His eyes took us in and we flew into a group hug. We were home; inseparable for the remainder of our stay. That weekend, our relationship changed from student-teacher to peers. We became fast friends. There was nothing we couldn’t and didn’t say to one another from that day forward.

A few years later, Dude asked Christie if her company could fund an operetta scholarship. It couldn’t, but she and I discussed it later that night. We were both doing well professionally and thought we could get a group of our friends to chip in and began the “Pine Tree Wonder Scholarship”, a half scholarship for someone in the Operetta. Christie and I continued to fund it until camp went from 8 weeks to 6 weeks and Dude stopped performing a full operetta in 2004.

A new theater was built in 1998. A friend remarked that he thought it would be wonderful if something in the building could be named for Dude. Dude’s older brother, Jim Bob, also worked at camp. For years, he directed University Drama, (in conjunction with the University of Michigan), until the University Division was disbanded. Later he came back as Dude’s assistant on Operetta. I had served six years on the National Alumni Board, so made inquiries about naming the lobby for the brothers and led the fund raising for that effort. Here is the photo from the dedication ceremony. 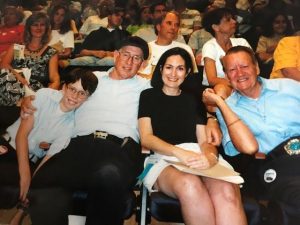 1998 with Dude, his son Brian and his brother, Jim Bob

Dude lived in San Diego, so, as visits to Interlochen became less frequent, I saw him less often. We talked and laughed long-distance. I was invited to, and attended his surprise 75th birthday party in San Diego in 2003. Lately, I knew his memory wasn’t as sharp as it had been. He would call me (the unofficial camp historian) if he had questions regarding old photos or who performed in what show, when.

He was one of the first to call after the Marathon Bombing, five years ago, knowing that I live close to the race course and always go out to see the race (I was on the course at the time of the bombing, but five miles away from the bomb blasts). “Betsy, please call and tell me you are OK!” I called to reassure him. Increasingly, the phone conversations became, “I don’t remember things as well as I once did, but I know you are one of the special ones…I love you”. To which I would always reply, “I love you too”.

Last year, I knew this April would be his 90th birthday and I couldn’t dither any longer. Getting from the island of Martha’s Vineyard to Interlochen, Michigan is a logistical nightmare, but it had to be done and I began planning the trip last summer. I knew I was on borrowed time. Yet I was unprepared when I got a private Facebook message on December 29, 2017 from an old camp friend. Dude had taken a fall, was on a respirator and was not expected to survive. He did not make it through the night. I sobbed in the locker room of my gym when I got the message the next day, immediately texting the news to a group of friends, who shared my grief.

There will be a celebration of his life on July 29 at camp. His wife of 40 years, heartbroken to lose her best friend, can’t believe that Interlochen would honor him in such a way. “It isn’t done”, she’s said to me. He taught thousands of students, and impacted all of us. It needs to be done. He started the careers of Tovah Feldshuh, Tom Hulce, Josh Groban, to name a few. He was always so pleased when talent he nurtured went on to do well, whether in the performing arts or in our regular lives. He is, quite simply, irreplaceable.

10 Responses to Dude – A Message of Love

Requiem for a Teacher
by Risa Nye