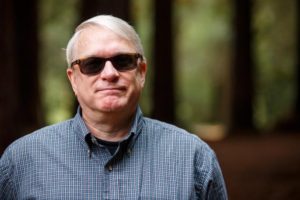 When I entered the MFA program at Saint Mary’s College in 2009, I had some serious doubts and fears: would I be able to produce any work worth reading? Would I fit in with the other students who were decades younger? Would I  be able to form relationships with faculty, something that eluded me in my undergraduate days at UC Berkeley? So many uncertainties I’m sure the other students also experienced–but mine were mine, and I had to deal with the situation in the best way I could.

Wesley was an important figure to me at a time when I felt excited, scared, adventurous, and doubtful. He read my words, praised me, and called me out. I felt appreciated and challenged by him.

Wesley, one of our professors, led our workshop and showed us–with kindness and honesty–our strengths and our weaknesses as one by one we revealed ourselves on the page. We took several leaps of faith, gradually becoming more secure about our work, knowing that we would be accepted as we were–with thoughtful guidance about ways to improve and strengthen our writing once we found our voices.

One of my submissions was something I think I called “Bits and Pieces,” just a bunch of very short reflections about parts of my life. Some were about love and loss, and some were about more pedestrian things. Beside one submission, he’d written, “this is lovely,” and beside another, “and this is beneath you.” I loved him for that–for both comments–because I felt respected and called out at the same time.

And now I am left to wonder how many of Wesley’s students felt this way  too.

My last conversation with Wesley was at an event on campus. I saw him outside (was he taking a quick smoke? Probably). He was gracious, paying me a compliment about my forthcoming book–the book that began in his workshop class. He said he was so proud of the alumni who were publishing and how it would be great for us to have a reading in the future. “Someone should make that happen,” he said. We hugged, and parted ways.

What was the last thing he saw? Who was the last person he talked to? How did he decide that life was no longer worth living?

He had been the Cassandra of Facebook, starting early on in the build-up to the election. I read his posts, which sounded the drum beat of inevitability during Trump’s slow ascension in the race leading up to November 8th. He predicted what was going to happen and why, and it all came true. His online friends couldn’t help noticing how his anger and his fears and the strength of his warnings ratcheted up as the other candidates fell or were pushed out of the race. He got into online fights with family that he regretted.The dialogue was painful to see, and I felt uncomfortable as I read it, but still…

I wonder if he just couldn’t stand any longer to live in the world he had predicted. Though we hadn’t spoken in a long time, I read his words and felt connected in the way we feel connected through social media.  Others close to him will have better insights into his life the last several years. Demons? I know he had them. Not a secret.

Wesley was an important figure to me at a time when I felt excited, scared, adventurous, and doubtful. He read my words, praised me, and called me out. I felt appreciated and challenged by him. He played a major role during my transition from wannabe to writer. He demonstrated empathy and concern, and he inspired so many of us to try harder, to dig deeper, and to feel more.

His life and mine intersected at my crossroads, and that is why I will never forget him. 8 Responses to Requiem for a Teacher

Dude – A Message of Love
by Betsy Pfau