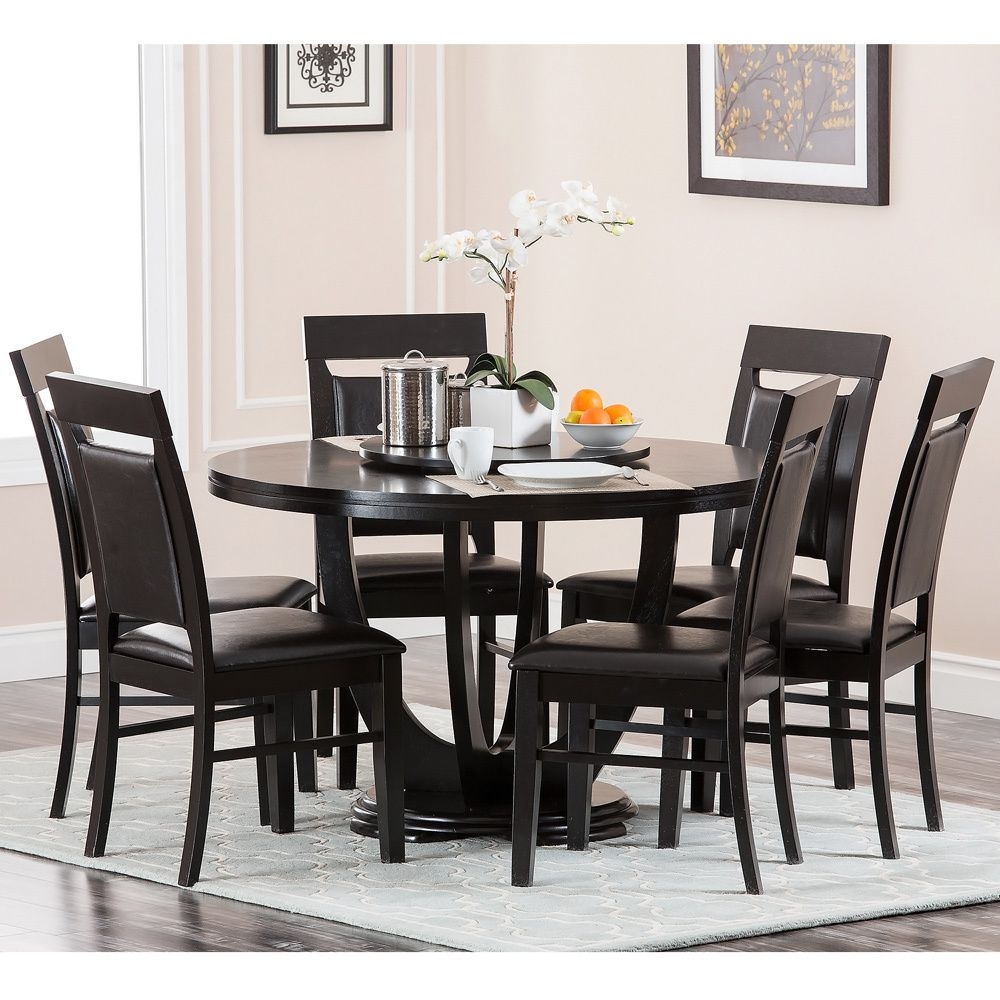 This doesn’t look anything like my kitchen table, but at least it’s round!

Growing up, my family had dinner all together every night. Breakfast was catch as catch can, except on Sundays when we had lox from the deli down the street and fresh bagels from the bakery a block past the deli, but even then I’m not sure whether we all ate that repast together or not. Lunch also may have been a haphazard affair, I have no specific memories about it. But dinner was sacred.

We ate in the kitchen at a big round table that had plenty of room, even when there were seven of us there.

We ate in the kitchen at a big round table that had plenty of room, even when there were seven of us there, including my grandparents. My mother was very emphatic about the virtues of a round table. No matter where one sat, she pointed out, everyone could see and talk with everyone else equally. My middle sister says “I remember being taught that round tables are the only tables that are good tables.” She has a round dining room table, and my oldest sister and I both have round kitchen tables, so we all obviously learned that lesson. (The featured image looks nothing like our table, which I can still see in my mind. But after spending a couple of hours searching for a round kitchen table, pedestal base, 72″ diameter, and finding nothing that looked like ours, I gave up and settled on this one.)

The table was in one corner of the kitchen, very close to two walls. (For those who read my kitchen renovation story, this did not change when the corner was pushed out, as that was a different corner.) We each had our own seat, which, while not assigned, was understood to belong to that person. My father had the seat in the corner, both because he was the least likely to get up to get anything, and because there were phones mounted on each wall which he needed to be able to reach. One phone was the office number and one was the house number. Frequently during dinner the house phone would ring and he would answer it. It would be the answering service (remember answering services? we referred to it as “the service”) calling him to tell him about somebody who was on the office phone. Then he would either give the service a message (of the “tell them to take two aspirin and call me in the morning” variety) or he would pick up the office phone with his other hand and talk to the person. This was considered acceptable behavior at the dinner table, because presumably a patient wouldn’t call after hours unless it was important. On the other hand, if one of us kids had gotten a call at dinner time, I’m sure we would have been required to tell the person we would call back later.

The conversation at our dinner table was always lively. Often it would be about things that happened at school. Sometimes my father would describe patients he had seen or operations he had performed that day, but when we all began to turn green listening to the gruesome details, my mother would make him stop. He also enjoyed encouraging debate. His favorite phrase was “Now just for the sake of argument. . . .” Then he would take a position on a controversial topic that he wanted us to argue with. My oldest sister was the only one who would engage with him, but I guess he kept hoping that my middle sister or I would argue too.

Another benefit to him of sitting in the corner was that sometimes he would fall asleep leaning back against the two walls. We would giggle about it and stay quiet so we didn’t wake him up. He was exhausted because he worked all the time. His medical office was attached to our house, and when he wasn’t seeing patients he was working on their files, and of course he went to the hospital at least once a day to make rounds. However, he was always with us in the kitchen for dinner, every single night. And so were all the rest of us. If we ever had any evening activities (and I don’t remember any, but there may have been), they must have taken place after dinner.

I do remember TV Dinners, and I’m trying to figure out when I had those. It must have been on the rare occasions when my parents were going out for dinner, leaving us kids at home with our grandparents. Rather than burdening my grandmother with cooking for us (and knowing that we probably wouldn’t like what she made), we got to have TV Dinners. I thought they were great, with each item in its own section of the tray, and even a dessert. As far as I remember, we ate them at the kitchen table like a regular meal, not in the living room in front of the TV. I don’t think I even realized that they were called TV Dinners because you were expected to eat them while watching TV.

In college, of course, meals were provided in the dorms, and mealtime was a nice opportunity to visit with people. The trick was to arrive around the same time as your friends. I can remember many times when I sat down with a group, and it turned out that they were all almost finished eating, so they left when I had barely started. Then I had to pick up my tray and move to another table with people who still had food on their plates.

In the years between college and marriage, when I lived with one or more roommates, we sometimes ate together but often did not. It was too complicated to try to coordinate our schedules, for the most part. Although my first year of law school, my roommate and I decided that we would cook and eat together, and that was really nice.

Once I had children of my own, I followed the same pattern I had learned as a child. We all always ate together, no matter what. If we had to eat a little earlier or a little later than usual to accommodate someone’s schedule, we did that, so that we could have that family time at dinner every night. I did start out with the idea that they had to eat what was being served, even if they didn’t like it, because we weren’t running a restaurant. That had certainly been the case when I was young. But eventually I gave in, and let them make peanut butter and jelly sandwiches, or ramen, or mac and cheese. And once Molly developed all kinds of digestive issues, we started buying frozen dinners that were non-dairy and sometimes vegan, and she could heat those up in the microwave. But she still had to eat her special meals at the same time as the rest of us. Different foods were okay, but not different times to eat them.

None of my kids have kids of their own, so I don’t know if they would continue the pattern or not. I like to think that they would.

18 Responses to Eat At Home