My Mom Was a Wonderful Mother, But Her Cooking…? by Edward Guthmann
25
(30 Stories) 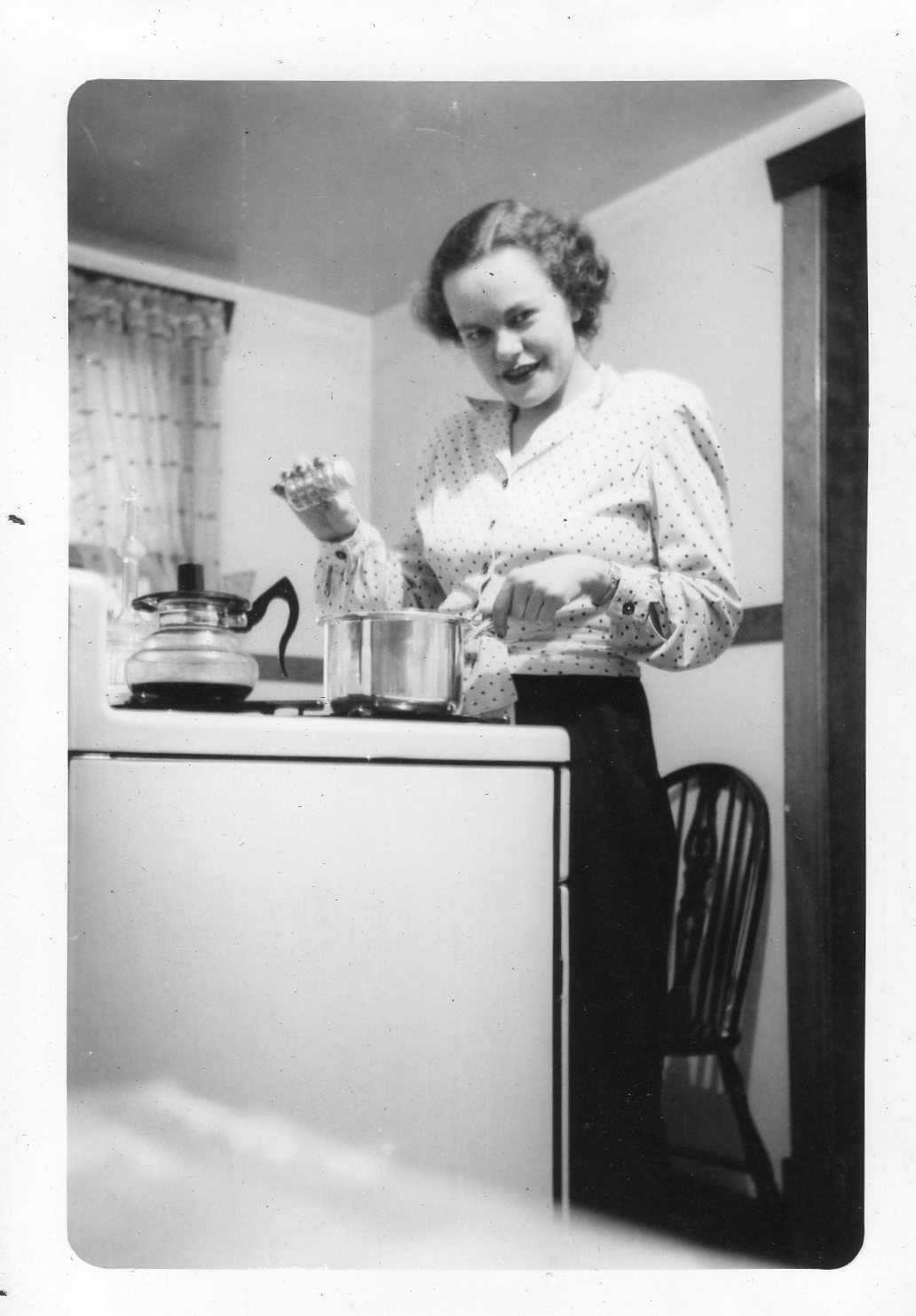 My mom was a wonderful mother in many ways – patient, modest, innately kind — but she was not a particularly good cook.

“Oh, I was a boring cook,” she admitted once when she was in her 70s and taking her meals in the dining room at Leisure World, the retirement facility where she and my dad spent their last years. “I made the same things over and over and never tried anything new.” 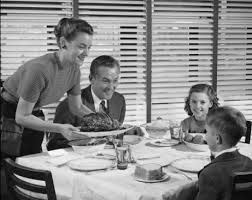 Generic family at dinner table, no resemblance to my own.

And yet, mealtimes were special in our household, in the sense that they were reliable and punctual and, though I didn’t appreciate this at the time, a source of comfort and constancy. I say this even though our family wasn’t very happy during my high school years. My brother Dan and I were sworn enemies, my dad was a tyrant who was usually grumpy after a long day at work, and my mother was left to walk a thin tightrope between pleasing Dad and simultaneously nurturing my brothers and me in ways that didn’t appear to him to be overly indulgent. 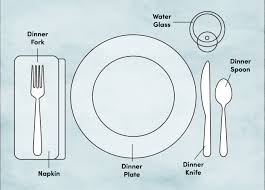 Older brother Dan and I sat at the heads of the table, far apart to deter our squabbling. Mom sat to my left, with younger brother Dave at her left. Dad sat opposite Dave, with Grandma at his side during the winter months when she visited from Chicago. I still remember the woven cotton place mats, off-white and salmon-pink. Fork on the left, knife and spoon on the right, Paper napkins, not cloth. A glass of milk at each setting. Never wine or beer for either parent. You weren’t allowed to put your elbows on the table, to sing or to hum, and if you finished early and had something to do you were expected to politely ask, “May I be excused?”

What Mom served for dinner, I’m sure, was largely subject to Dad’s approval. “I don’t want you boys eating highly seasoned foods,” he announced once with dour authority. “Why?” I asked. “Because I said so,” he answered. I never found out why — maybe because spicy foods lead to digestive problems and to colitis, gastritis and stomach ulcers? Beats me. 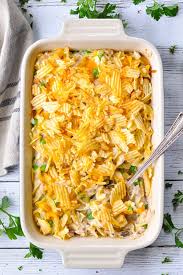 Tuna casserole. not to be served to gourmets, Francophiles or future restaurateurs.

Consequently, the bill of fare at the Guthmann table was bland and overcooked. Mom’s hamburgers, a weekly occurrence, weren’t flavorful, juicy or plump, but flat and dry and requiring lots of ketchup. On the side we’d have French fries, deep-fried on the stove top, that were three times the size of restaurant fries.

Tuna casserole was another standby. That recipe, which I still have on a faded 3×5 file card, calls for 1-½ cups of broken raw noodles (the word “pasta” was never used in our household, just “noodles”); a family-size can of tuna; a can of cream of mushroom soup; 2/3 cup of evaporated milk; 1/3 cup of minced onion; and half a cup of grated American cheese. Mix together lightly, sprinkle a crumble of potato chips on top, and bake for 30 minutes at 350 degrees.

I’m tempted to make it again. Who knows what kind of Proustian memories might be aroused?

Veal parmesan, not a favorite.

I made Mom’s tuna casserole in college, and for a brief time after I moved to San Francisco. I once served it in my tiny kitchen on Oak Street to Billy West, a Francophile and devoted foodie who later opened the now-legendary Zuni Café. I swear I had no idea at the time that tuna casserole was an embarrassingly down-market entrée – not to be served to sophisticates. Apparently I was forgiven, because Billy invited me to dinner, too. It was so long ago that I don’t know what he served. Poached salmon with haricots verte, perhaps? Persimmon pudding? I just remember being stunned by the rich, surprising and subtle flavors. Things I’d never tasted. I didn’t know that people could eat that elegantly in their own home! I thought you had to go to a fancy restaurant for food like that. 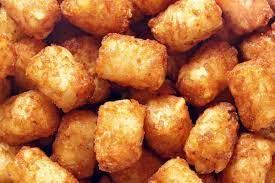 Which brings me back to my mother and her modest culinary skills. Pork chops and meat loaf were other staples. Fried chicken with Uncle Ben’s rice on the side – not bad. Steak, which I always smothered in A-1 Steak Sauce. Veal parmesan with enough cheese to choke a Clydesdale. Macaroni and cheese. Spaghetti prepared with tomato sauce, ground beef and a packet of Lawry’s seasoning.

On the side, there’d be a baked potato or more often Tater Tots. Frequently a salad of iceberg lettuce, chopped carrots and those tough, mealy tomatoes from Alpha Beta or Von’s supermarket. Oil and vinegar dressing was a favorite. Or “1000 Island,” which Mom improvised by mixing ketchup with mayonnaise. She had a thing for mayonnaise. 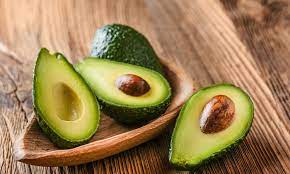 We never, ever ate avocados.

Years ago I read food critic Ruth Reichl’s Tender at the Bone, in which she describes with horror a dinner at her ex-mother-in-law’s home. On the side was a pear salad. One half of a syrupy canned pear sat on a iceberg lettuce leaf, with a fat dollop of mayonnaise in the scooped-out hole in the center. As I read Reichl’s book, I remembered with a cringe that my mother served that exact same salad. I suspect she culled it from Betty Crocker, or another quick-and-easy cookbook from the frugal Fifties.

Mom never served avocados or artichokes, even though we lived in California where they grew abundantly. All our vegetables were frozen or canned, corn on the cob being the exception. Until I was grown, I didn’t know how fresh spinach, peas, broccoli or Brussels sprouts tasted. White bread only, never wheat or rye. And, since Mom had an aversion to shellfish, never lobster, shrimp, scallops or mussels, which were probably out of her budget anyway. 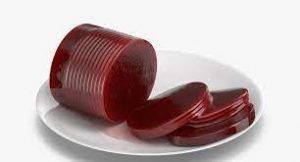 It’s called cranberry “sauce,” but is it?

Even at Thanksgiving and Christmas, thrift and ease were Mom’s culinary guiding principles. Our turkey stuffing came from a package and turned soggy when cooked. Sweet potatoes were served; a relish dish of pitted olives, sliced carrots and celery. The cranberry sauce was canned – I remember the bright red cylinder slipping out and shimmying slightly on the plate, the ribbing from the tin still visible on the jellied hunk of “sauce.” 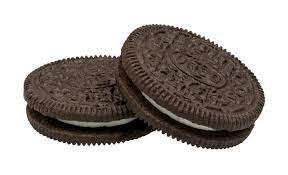 Desserts varied little throughout the year. Ice cream cake roll from Baskin Robbins was a huge favorite. More often Mom served rice pudding or Ish Kabibble (chocolate pudding with Nilla wafers), or Jell-O with sliced bananas and chunks of Libby’s fruit cocktail inside — plus a scoop of mayonnaise on top. Other nights dessert it was two Oreo cookies each, which was tricky since I loved to split Oreos in half and scrape the frosting off with my top front teeth. If Mom caught me in the act, she’d say, “That counts as two cookies, you don’t get the second.”

That makes her sound mean and stingy, which she wasn’t. She just hated to see me playing with food.

I feel a tad guilty discussing my mother’s culinary limitations, but in her defense she was never taught how to cook by her own mother. I know from talking to dozens of people over the years that she was typical of housewives from the 1950s and ‘60s, an era when the prudent budgeting of time and grocery bills was paramount. The exceptions I find are Jewish or Italian friends, whose grandmothers came from the Old Country and made delicious, fragrant meals and passed their artistry down to later generations. The rest of us, limited by experience and underdeveloped palates, had a long learning curve ahead.

But here’s what I want to emphasize: Although my mother wasn’t an accomplished or passionate cook, she was utterly faithful, dependable and the true emotional center of our family. She made it all work, and tried to keep the peace. She always had supper ready when Dad came home from work at 6:15 or 6:30, always greeted him sweetly and asked how his day went — knowing his mood might be foul — and rarely complained about her lot in life, the amount of work she exerted in having dinner ready each night, or the level of appreciation she received or didn’t receive.

I don’t know how she did it, but I am forever grateful.

12 Responses to My Mom Was a Wonderful Mother, But Her Cooking…?