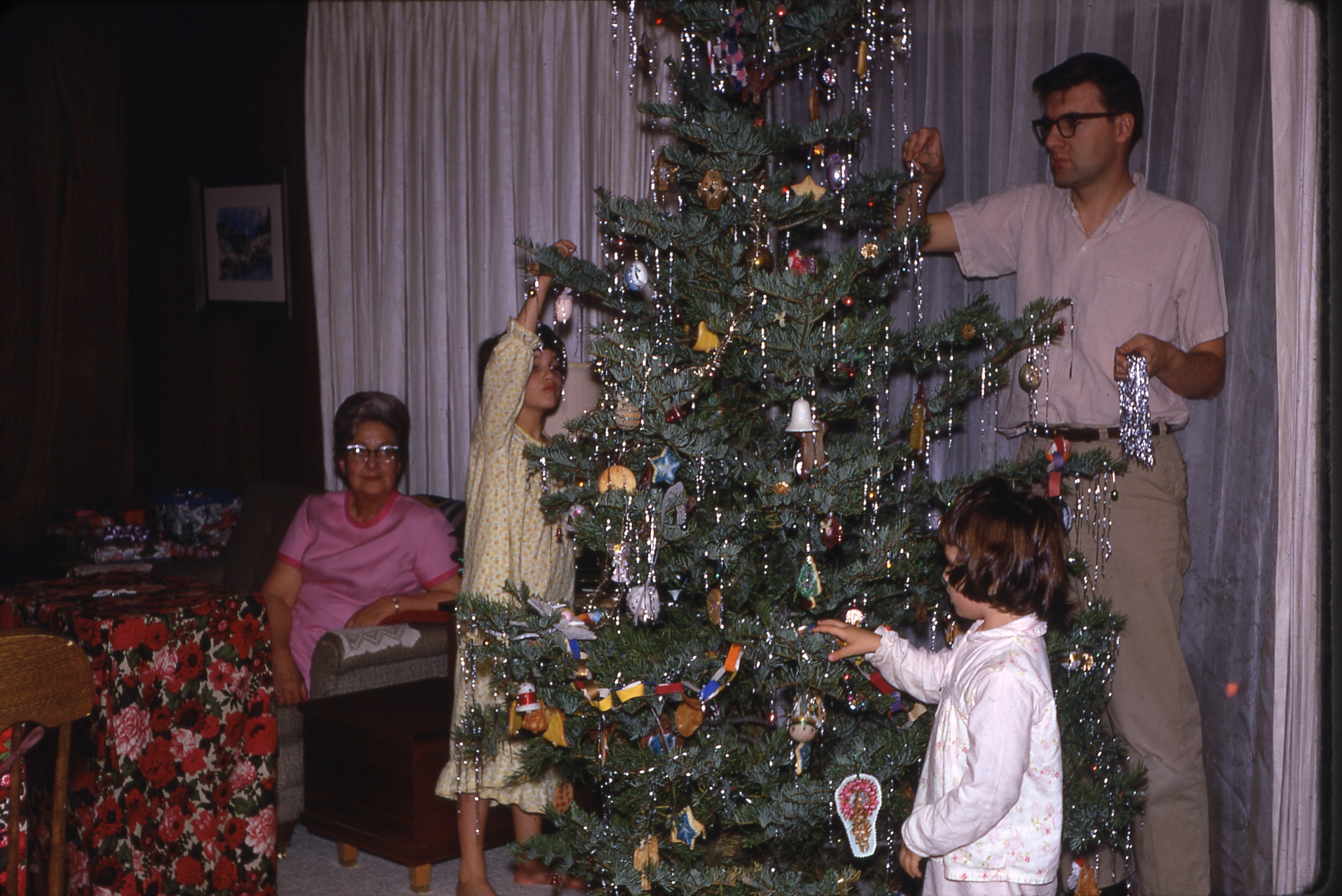 People are always talking about how smells can take you right back in time to a powerful memory. It’s never worked for me. Maybe years of allergies or smog have broken my smeller, but I’m not a person who swoons at the memories smells evoke. With the possible exception of mildew, which I think smells like Maine, the only smell that has ever evoked a powerful response in me is Estee Lauder Youth Dew Eau de Parfum, the scent my grandmother wore.

This photo (found on Pinterest) resembles most closely the little brown bottle I used to have knocking around in my bathroom drawer with the toothpaste, dental floss, ear plugs and empty pill bottles. (If I find it again, I’ll take a photo for documentation!) The little bottle belonged to my Grammy Brown, my father’s mom, wearing the pink dress on the left above. I no longer remember when I acquired it, and I’m rather distressed to think it’s misplaced.

Grammy took care of me when I was a newborn. My mother had to return to the hospital and Grammy flew from Indiana to Southern California to take care of me and my dad for a few weeks. When I was seven, she came again, another time my mother was hospitalized. Maybe it was the smell of safety I associated with her, of rescue.

Grammy Brown taught me how to file my fingernails with an emery board. She made peach pie. She was very soft and warm and hugged you in a way that made it hard to breathe. She had a curious false breast, as big as a loaf of bread, that she wore inside her white satiny brassiere (itself inside a white silky slip) inside all her dresses. Grammy lived with Grampy Brown, who was large and firm and alarming in many ways, and talked about something called “The Gold Standard” at breakfast while innocent children were trying to eat their Cheerios. Grammy liked to play cards and she had a collection of tiny tea cups that didn’t match next to a green velvet chair in later years in Cleveland. She always smelled just a tiny bit sweet, just a tiny bit cinnamony, just a tiny bit powdery. If soft had a smell, it was Estee Lauder.

It’s hard to remember the chronology of all the memories I have of Grammy Brown. At some point I learned the name of the perfume she wore. At some point I understood that she’d had a mastectomy before she married by grandfather. Eventually I learned she was my father’s step-mother, and that my own mother had been hospitalized for manic-depression the two times Grammy came to California and took over. Grammy died when I was 18 and living out of the country; I will always remember how shocked and far away I felt when I learned the news in a letter from home.

I kept that little bottle close at hand for many many years. The smell was still powerful, and even now, all I have to do is think of it to remember so many details about her. If the bottle is gone at last what will I do? I wonder if a new bottle of the perfume would smell the same.