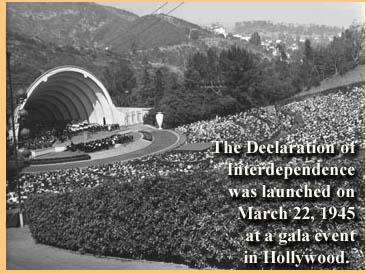 The Dangers of an Egocentric America.

Alright, fast forward to the present: I was delighted that Mother Nature took center stage with a spectacular display of natural fireworks on the 4th! It was a relief for me, the wildlife and our already overly polluted air to take a break from another display of “we’re the greatest.”

Is anyone else tired of “bombs bursting in air”? I’ve struggled for years with the way we celebrate the fourth of July. Sure, when I was a little kid it was fun to blow up firecrackers with my older brother, once we floated a Revel model of a WWII aircraft carrier on a Minnesota pond and took great delight watching the M-80 blow it to smithereens. We also had fun lighting sparklers and waving the Star Spangled Banner. (factoid: Our National Anthem wasn’t written to celebrate the Declaration of Independence – it was a poem celebrating a battle during the War of 1812). Ah, but I was so much younger then.

Don’t get me wrong, my love for justice, liberty and the ideals of America run deep. Let’s just say the “America: Love it or Leave it” bumper stickers from the late 60’s did a number on my psyche. Our antidote at that time was “America: Let’s Make it Better”! That sentiment is worthy of re-evaluating and re-introducing as a meme we can all share, doncha think?

I believe the same fears; doubts and ill-informed Patriotism that generated the angry, divisive politics of the Nixon/Agnew era also fueled resistance to President Obama’s call for change. Could the current acrimonious social/political divisions arising from the spiteful twitterer in chief and his followers simply be an extension of the flag waving, “let’s kick some butts” tea partyers of not so long ago?

Back to the ironic simplicity of bumper stickers and how they reveal the emotional temperament of a society and the internal fireworks they ignite.  I’m not sure about you, but I have a tendency to make very quick judgments of the drivers who plaster inflammatory messages on the behinds of their vehicles. Just like my reaction to fireworks, it takes me awhile to calm down. Here’s one example of the recent crop of tailgate adornments for gas-guzzlers: 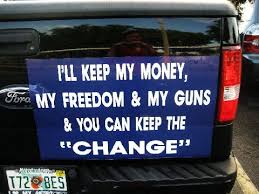 Fortunately, as a young, pro-peace activist, aided by a college class focused on the New Industrial State taught by the author, John Kenneth Galbraith, I became aware that the mentality perpetuating nation-state superiority and global domination were outdated, even dangerous concepts. If only our anti-war movement had advocated “Power to the Peaceful” back then, the authoritarian empire builders might have had a more difficult time dismissing those trouble making hippies, as they loved to characterize us.

Alright, fast forward to the present: I was delighted that Mother Nature took center stage with a spectacular display of natural fireworks on the 4th! It was a relief for me, the wildlife and our already overly polluted air to take a break from another display of “we’re the greatest.” Sure, it’s appropriate to celebrate the bloody birth of our nation, but isn’t there a better way to do it in the 21stcentury?

I was delighted to rejoice with each natural lightening bolt as an appropriate exclamation point that we don’t need to waste any more precious resources on blowing things up in mid-air—Good for all those communities suffering from drought or other climate crisis factors for cancelling their fireworks displays. So what if some of the cancellations were austerity measures, in fact, their conservative action may set a trend and more communities can use that money for the benefit of the whole.

According to the American Pyrotechnics Association there are approximately 14,000 fireworks “shows” across the county. The average cost per small show is $2,000.00 per minute. The largest “show” in the country is Macy’s Spectacular in New York City, which ignites 1,600 shells per minute at an estimated $6,000,000 wholesale cost for just the fireworks. Do you think we could find a better way to spend that money?

To quote one of my favorite songwriters, Jackson Browne – “Pardon me if I have seemed to take the tone of judgement, for I’ve no wish to come between this day and your enjoyment / in a life of hardship and of earthly toil there is a need for anything that frees us”

Please allow me to segue from Independence to interdependence and interconnectedness. These are the most basic, most fundamental principles of ecology and ultimately all wisdom traditions.

So, here I am, several days after our national holiday and I find myself focused upon the movement for interdependence. 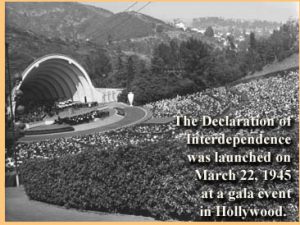 While his interest at the time was primarily centered on racial justice and an end to segregation, his Story of Civilizationtook 11 volumes to provide the inspiration and depth of perspective necessary to address such a perplexing challenge. He also applied this deep ecological concept to the geo-political domain.

Even though Durant’s declaration was entered in the Congressional record in 1949, it took another 30 years before Henry Steele Commager’s Declaration of Interdependence focused on transcending the tyranny of nationalism. He was intent upon raising awareness of national leaders to move beyond their insistence upon separateness. This document was published in 1975 by the World Affairs Council of Philadelphia. It represented an urgent call to notice the threat of extinction confronting human kind.

Here we are, another 40 years later poised to perpetuate the status quo or  to move forward with guiding principles articulated in Commager’s declaration and other inspirational documents, including the Earth Charterand Agenda 21, designed to establish nature-centered core values that honor diversity and inclusiveness, while still honoring our cherished values of freedom and liberty.

The Earth Charter was unveiled during the 1992 Earth Summit in Rio.  I was fortunate to sign this document in the midst of a media circus surrounding Ted Turner and Jane Fonda.  As a participant in the conference, I was minding my own business and walking down the expansive semi-outdoor corridors of Rio Centro, when a large group of delegates came walking toward me.  Ted Turner was leading the pack along with Al Gore and Tim Wirth, the Director of the United Nations Foundation and former Senator from Colorado were right behind Ted and Jane.

I got swept up in the crowd and found myself next to Al and Tim, fortunately I had met them both during Al Gore’s book tour for Earth in the Balance – Ecology and the Human Spirit.  They had been to the Aspen Center for Environmental Studies a summer or two before and gave a compelling and prophetic presentation about the probability of disruptive climate change.  As we arrived at the photo enlarged replica of the actual Earth Charter, the next thing I knew, Ted Turner was handing me the magic marker he had just used to sign the permanent white board and there I was, Forest Gump II, signing the charter and then turned and handed the pen to Al Gore.  My ten seconds of fame at the Earth Summit in Brazil! 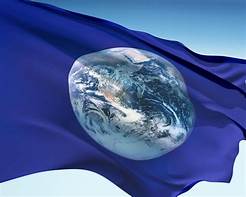 Isn’t it time to fly an Earth Flag and get past our rah, rahfascination with blowing up fireworks while declaring ourselves the single greatest nation on Earth? Can we evolve our consciousness and behaviors? Can the Eagle fly with the dove? 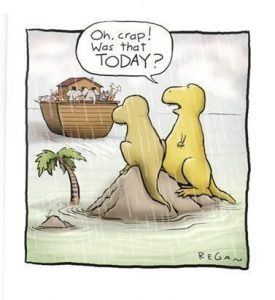 Let’s not miss the proverbial boat again and let’s not wait another 40 years! Onward with courage. 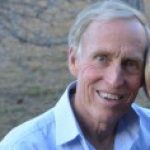 bwilson
I've enjoyed an eclectic journey from being the Director of Conferences and Seminars for Snowmass Resort in Colorado for a decade, to a management position with John Denver's Windstar Foundation, designing international symposia called "Choices for the Future" and also coordinating the first World Nature Quest. I apparently still believe that individuals can make a difference. In spite of all the evidence to the contrary, I remain optimistic about humanity's future. See More on my Web Site.

2 Responses to Fireworks and the Dangers of an Egocentric America