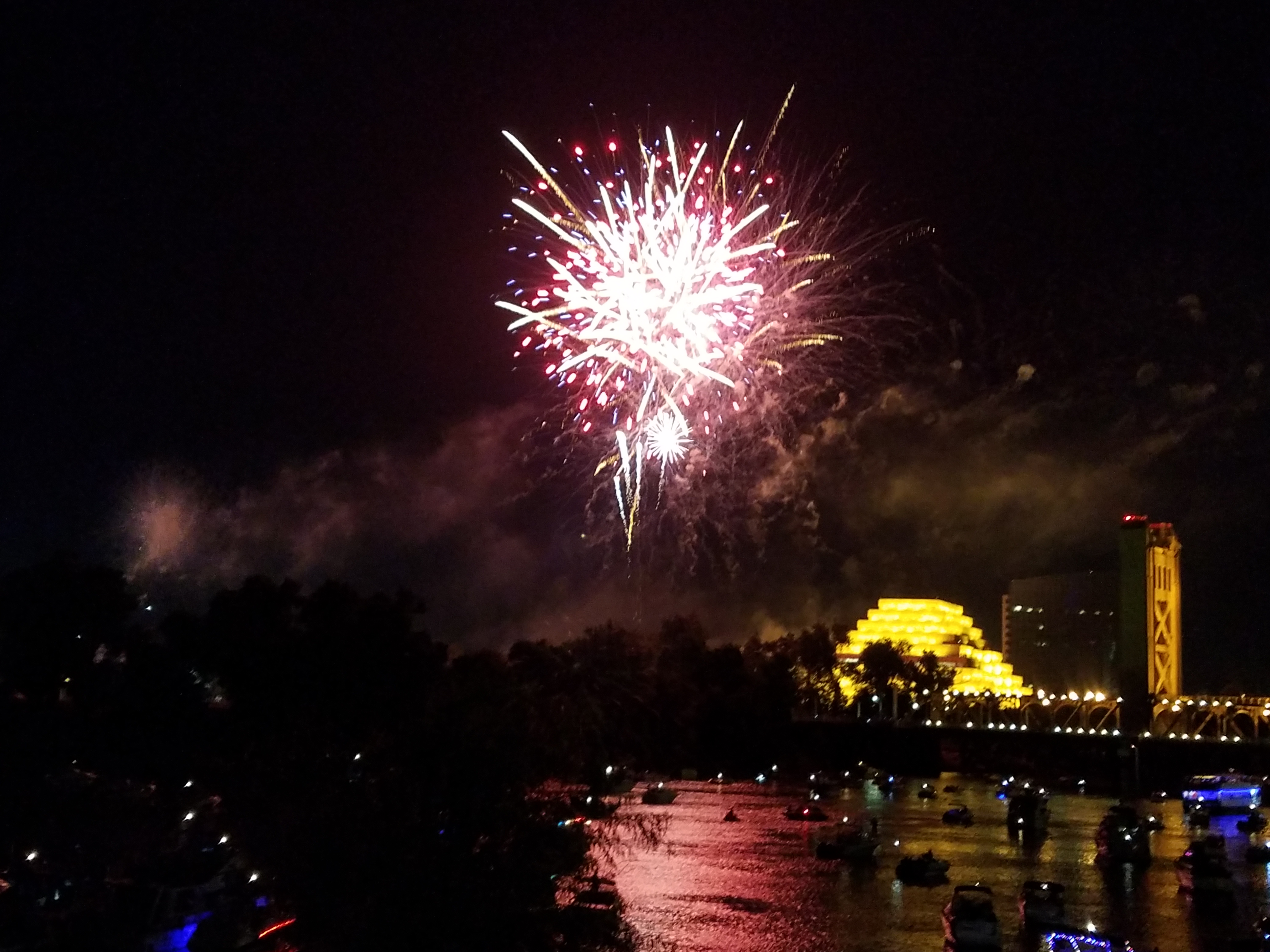 I find fireworks mesmerizing and magical. I would happily go anywhere, at any time, to see them.

Watching all those colorful explosions shooting through the sky just makes me happy.

Fourth of July is, of course, the holiday that is traditionally associated with fireworks. In my childhood, I went to summer camp for eight weeks from the time I was seven until I was fourteen, and after that to summer programs in Mexico one year and Syracuse University the next, so I was never anywhere that had a celebration, with or without fireworks. For the first six years of my life, my family spent our summers at Lake Hopatcong, and if there were any kind of Independence Day festivities there I don’t remember them. Maybe that is why I am so obsessed with fireworks now, because I missed out on them as a child.

In the neighborhood where I have now lived for almost thirty years, there used to be a block party every year on the Fourth, with one of the streets closed off, everybody cooking hamburgers and hot dogs on communal grills, a blender going nonstop making margaritas, and a bounce house and slip ‘n’ slide for the kids. Lots of people brought the “safe and sane” fireworks which are legal in California, and after it got dark, we lined the street with our chairs while a few of the men took turns setting them off. They did it very safely, dropping the used fireworks into a bucket of water to make sure they were fully extinguished, and everyone clapped and cheered with each one. Well, maybe not everyone — I can remember at least one of my kids getting freaked out by the loud noise and being taken home by my husband. I always stayed though, because I couldn’t bear to miss any of the show.

A note on those “safe and sane” fireworks: selling them is a huge fundraiser for lots of local nonprofits, and for the seven days from June 28th until the Fourth there are fireworks stands everywhere you look. For all four years that my son Ben was in high school, and in the marching band, I worked in the Band Boosters’ fireworks booth. The students couldn’t volunteer in the booth, except for some of the seniors, because you have to be eighteen to sell fireworks. But the parents and older siblings had fun working shifts and learning about which were the best fireworks to buy. It’s a great moneymaker, because there is something in every price range, so most people who walk by the booth end up buying something. I know it was the biggest fundraiser of the year for the band when I was working it, netting them thousands of dollars, and I’m sure it still is.

Our neighborhood block party came to an end about five years ago when one of the organizers died, and nobody else had the heart to keep it going. Since that time, we have tried a few different parks that were having fireworks shows, but the last couple of years we have decided that watching the City of Sacramento’s fireworks show from a walkway overlooking the Sacramento River is the best choice. As you can see from the Featured Image, snapped last night, the fireworks get reflected in the water so they are doubly beautiful.

It turns out that nowadays there are lots of other times to see fireworks besides July Fourth. At Disneyland, there is a fireworks show every night in the summer and around holidays, and on weekends the rest of the year. The fireworks explode over Cinderella’s castle, and everyone is crowded into Main Street to watch them. The crowds can be slightly annoying, but once I have found my spot, with no trees blocking my view of the sky, I am happy. It really is magical. I never went to Disneyland (or Disney anything) as a child, so I can’t say it takes me back, although of course there were all those Disney TV shows and movies which started out with fireworks over Cinderella’s castle.

A frequent fireworks opportunity closer to home is provided by Sacramento’s triple A baseball team, the River Cats, which has fireworks every Friday and Saturday night when there is a home game. Their field is close enough to my house that we can hear the booms, but unfortunately not close enough to be able to see the fireworks. I’m not a baseball fan, but I would totally go to a game if anyone else in my family wanted to go, just to see the fireworks.

The best fireworks I ever saw were on a New Year’s Eve about fifteen years ago in Ixtapa, Mexico. We had been told there would be fireworks on the beach at midnight, so we wandered over there some time after 11:00. We were just hanging out on the beach enjoying the night air and waiting for them to start. Suddenly, with a boom, there they were, exploding directly over our heads! We stretched out on our backs in the sand and looked up above us as magnificent explosions of color appeared one after another. It was the most beautiful and mesmerizing thing I have ever seen. Undoubtedly it was unsafe, and would never be allowed in the US. Some flaming bit could have fallen down right on top of us. But the danger made it even more exciting and memorable. It was a great way to start a new year!

There is something about watching all those colorful explosions shooting through the sky, whatever the occasion, that just makes me happy. Despite any concerns I may have before or after, whether fretting about small things (like my hair) or despairing about big ones (like the fate of our country), for those fifteen or twenty minutes, I can just be swept away by the beauty of the sparkling trails of light.

14 Responses to Smoke on the Water