Fireworks Behind the Scenes by Susan
25
(34 Stories) 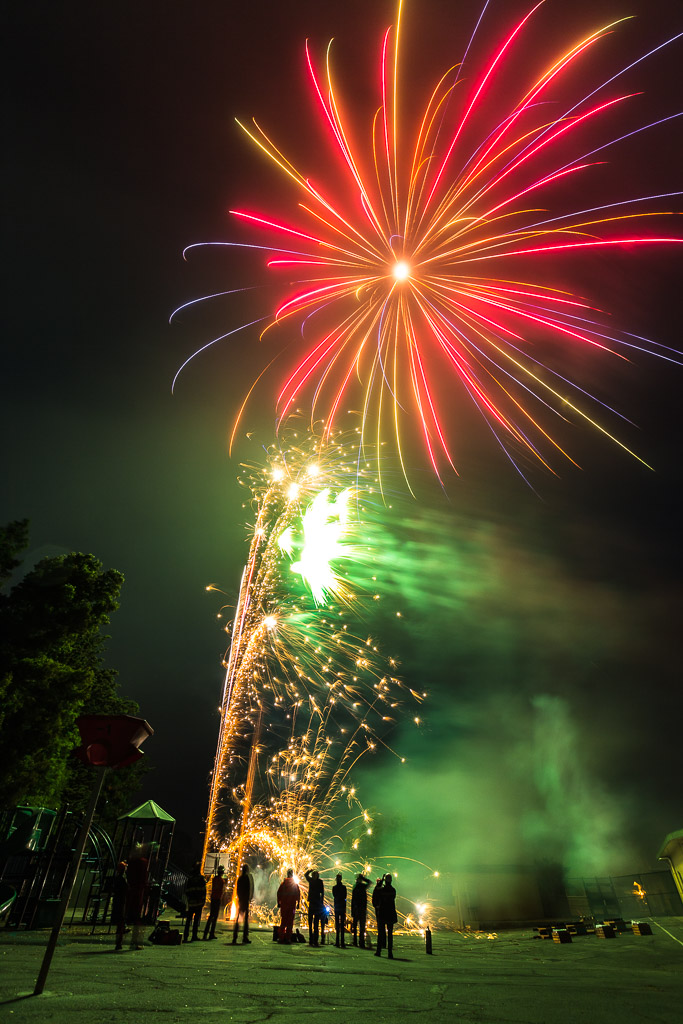 It’s traditional to end the 4th of July by watching a fireworks show.  When I was a kid, the Kiwanis Club set up a huge stand a week or more prior to the holiday, and sold ever-escalating effects.  We bought some every year and set them off in our backyard.  Sometimes we would join with the neighbors to get more bang for the buck (sorry.)

Get paid to blow things up?? He was in!

Fast forward a bit to the ’70s, when my husband was working at Stanford.  One year a guy in the lab asked if he would like to join his fireworks crew.  What, get paid to blow things up??  He was in!

Off they drove to Salinas, where they spent a blistering sunny day at the racetrack lifting heavy product, shoveling sand, and for a few brief minutes after dark, transforming the night sky into something magical. I have been a Fireworks Widow ever since.

Every effect you see during a show is the result of a shell, something that looks like an upside down snow cone wrapped in paper with a long fuse coming out the top.  Each shell holds a charge of black powder, and various chemicals and powders that make the beautiful display. To get that shell into the air, the fuse is lit, the black powder ignites and sends the charge skyward, and the powders explode.

Each shell awaits its fate at the bottom of a tube.  The tubes are gathered into racks.  So the guys and gals on the fireworks crew start the day assembling the racks, setting up the various sized tubes.  Now, when the shell explodes, the concussive effect rocks the tube.  So there has to be dirt and sand packed around each tube, to be sure the shell goes straight up. All that dirt and sand gets delivered to the site, and shoveled into the racks, by the fireworks crew.  No wonder they get paid.  OK to be fair, if there is a decent sized show with a good budget, they hire a little skip loader and dump the dirt in – a task in itself that is to be desired by the crew.  Depending on the pyrotechnician (the person who has the license to shoot the show, who is hired by the fireworks company and who in turns hires the crew, and who really should grow up and get a life) they frequently provide a near-gourmet meal for the crew.  Competing pyrotechnicians vie for the best crew members, and hot dogs just don’t cut it. BTW you’ll be relieved to know, all pyrotechnicians adhere strictly to no-alcohol-on-site.

I participated on a crew exactly once, and knew it wasn’t for me.  So I spend my 3rd and 4th of July lounging around, and occasionally taking friends to the site where my husband offers a behind-the-scenes look at the setup. Our two sons have followed their father into this elite pastime.  In fact our youngest son is a musician, and one of his band bios – in addition to his musical accomplishments – notes that he is licensed by the ATF to handle Class IV explosives.  Not something every drummer can claim.

This morning I sent husband and son off to San Francisco, where they are working on a show so large it is loaded onto two barges which will be towed out into the Bay by tugboats. Be they spectacular megashows, modest hometown displays at the local elementary school, or a firecracker lit after eating a hot dog at the family picnic, the magic of the 4th is tied to fireworks.  Be safe, be sane, and have a wonderful 4th of July!

7 Responses to Fireworks Behind the Scenes