Prompted By Lost and Found
12 comments. 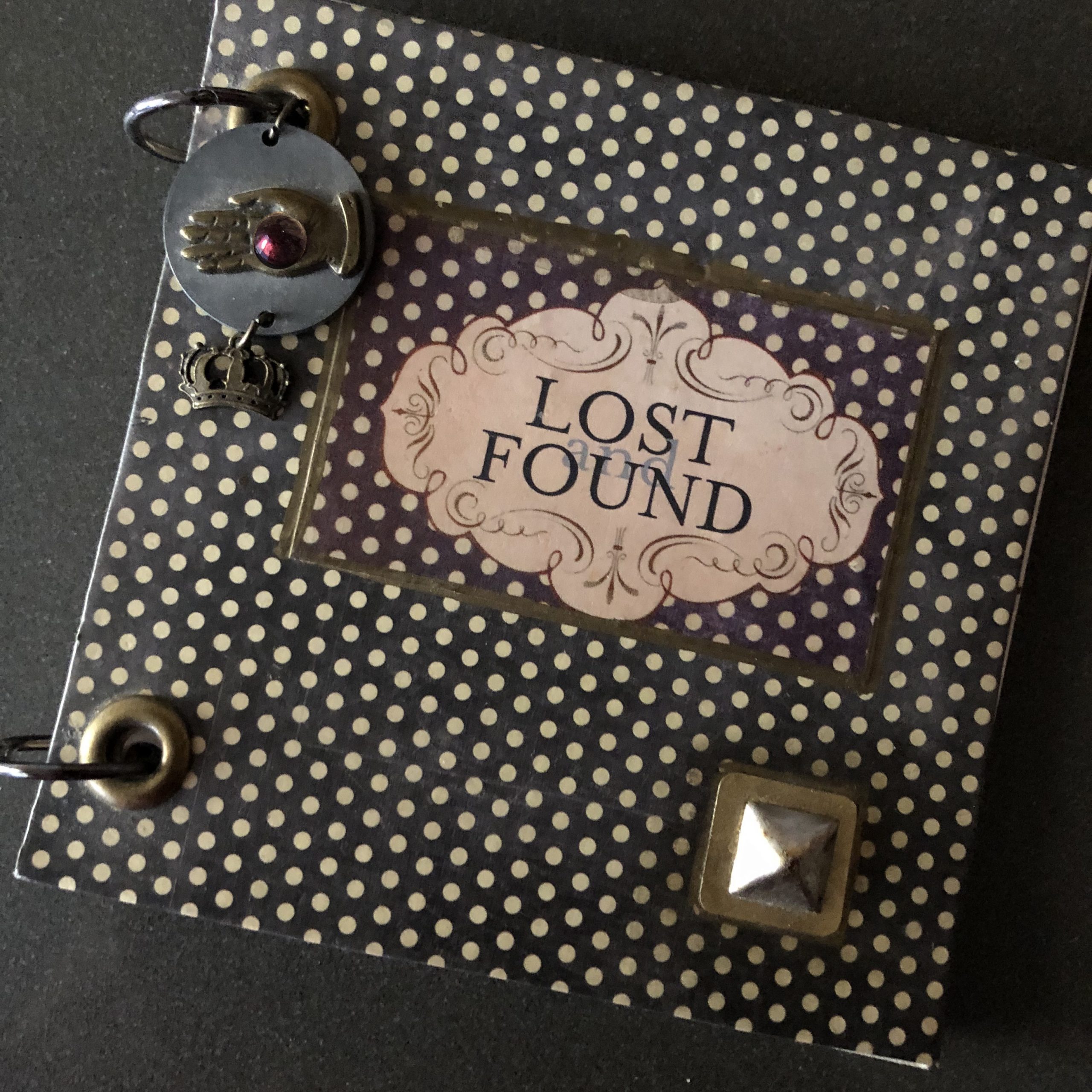 As you were getting out of the car, your necklace broke, a smooth jade disk hanging from a heavy red string. Given to you by your Tai Chi master, you’d worn it constantly for years, occasionally replacing the string when it would fray. When it broke, you quickly stuffed it in your pocket as you walked down the block to the designated spot where we were to meet for the very first time, a short distance from where I lived.

Two men walk along my street, a red string catches one’s eye. He picks it up, admires what he has found, and lovingly presents it to the other.

There was a chance of rain, so you had brought an umbrella. Turns out we didn’t need it; the sun was shining brightly. There are roughly 100 billion stars in our Milky Way galaxy and of those the sun is closest to earth, a mere 92 million miles away. The moment we met and you saw the light shining in my eyes, you recognized it as the starlight it was, traveling from the sun to my face in about 8 minutes and 19 seconds.

Back in 2004, the Guinness World Records listed match.com as the largest online dating site in the world, with more than 42 million singles registering since its launch. I recently read that match.com members go out on something like 6 million dates each year. I have no idea what the long-term success rate is, but I can’t help but think of all the really bad first dates…especially the eyes that registered disappointment at first glance.

All smiles, we hugged, opted to forego the requisite cup of coffee at Starbucks and instead walked up the street towards the museum. Conversation flowed freely, but still we stopped at a café to give ourselves time to sit across from each other and talk face to face. Having eagerly exchanged optimistic emails and held grinning phone conversations in the week before, I’d brought some show-and-tell to give you an idea of what I did in my free time, and I gave you a little gift that you admired, then placed in your pocket.

Not long after that, past the big tar pit, maybe somewhere between the Calder reflecting pool and the huge Serra installation, time stopped. Past, present, and future fused. I bet our first date was the best first date in the history of mankind. In the linear world it was several hours later when we said goodbye at your car, and as I began walking up the street to my place in a happy daze, you quickly pulled the gift I had given you from your pocket and waved it at me, calling “And thanks!”

In my mid city apartment, night falls, it does rain, and early the next morning I hear the street cleaner making its noisy way down the block sweeping up a week’s worth of urban detritus – wet fallen leaves, cigarette butts, broken glass, rusty bottle caps, ticket stubs, and crumpled lists – and I nuzzle deeper into my covers.

Listen to the eternal heartbeat of the universe: Thum-thum, a seemingly subtle coincidence dramatically changes the course of our lives; thum-thum, a chance encounter provides us, against all odds, with the precise person, thing, or information that we just happen to need; thum-thum, a change in perspective forever alters our perception and we no longer have panic attacks. Dip your toes in the flow that is the marvel of synchrony: fireflies in Malaysia flash in unison; electrons march in formation to create electricity; the menses of mothers and daughters, friends, or roommates coincide; and planets, moons and suns act in harmony.

Two men walk along my street, a red string catches one’s eye. He picks it up, admires what he has found, and lovingly presents it to the other.

You and I make a plan to meet up again on Saturday, and you mention your lost necklace. Perhaps it fell out of your pocket when you were waving goodbye. Over the next few days I scour the street from curb to sidewalk but to no avail; finally, hope still alive but fading fast, I half-heartedly tack LOST notices on the only two wooden signposts along my block. 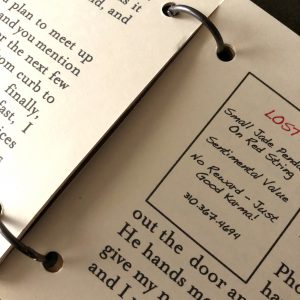 On Saturday morning I get a call…am I the one who lost a necklace? Phone in hand, I race out the door and up the street to this man, a neighbor I’d never met. He hands me the necklace, I give this new friend a huge hug, and I run home.

Less than an hour later you arrive and I pull your necklace out of my pocket and dangle it before you. Stunned disbelief in your eyes…I had what you had not only lost but frankly given up hope of finding. 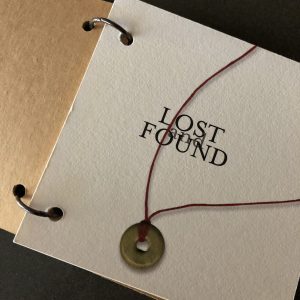 This story and the photos are from a little book I made for Garth for our first Valentine’s Day, almost ten years ago now.