Prompted By Lost in Translation
7 comments. No, fromlostiano is not the name of a song, at least as far as I know. It is a Spanish word that my daughter Sabrina introduced to me many years ago, that refers to the comical translations that result when people translate word-for-word from another language into English. The phrases on the image for this prompt are good examples, such as “Speaking cellphone is strictly prohibited when thunderstorm.” We can figure out what was intended, but the sentence is still pretty funny. Often one can see t-shirts in foreign countries that have English phrases that make no sense, and in fact, Sabrina has collected pictures of such shirts over the years, although I wasn’t able to get them from her in time. Maybe I will add them to the story later.

No, fromlostiano is not the name of a song, as far as I know. It is a Spanish word for comical Spanish-to-English translations.

I’ve been using the word fromlostiano for a long time, but I never knew until preparing to write this story what the derivation of the word was. (I wonder if Sabrina even knows this.) Two Spaniards first wrote about the phenomenon of literally translating from Spanish to English without trying to maintain the real meaning, and their book was called From Lost to the River. This title is a literal translation of the Spanish idiom de perdidos al río, which means that in a desperate situation it is better to do something risky than to do nothing. While word for word it is a correct translation (de=from, perdidos=lost, al=to the, and río=river), it does not in any way convey the intended meaning. The first two words of the book title turned into the noun from-lost-iano.

Although originally the word only referred to translations from Spanish, my daughter and her group of international friends now use it for any comical phrase that is clearly a mistranslation from another language. Most often it seems to occur with products from China and Japan, especially t-shirts and sweatshirts. American tourists often buy them, because they seem so funny to us. Yet apparently the locals like them too, because they think that anything with English writing on it is cool, even though they don’t know what it means.

Here’s a cute one, that I’m guessing means Keep off the grass? 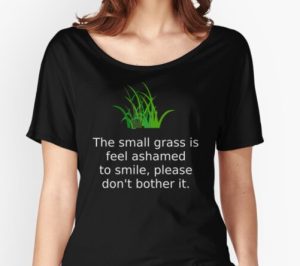 Here’s another fromlostiano t-shirt where I can’t even begin to guess what it was intended to mean. As far as I know, even though English speakers are terrible at mastering foreign languages, there is no comparable phenomenon of funny mistranslations from English to another language, it only happens when the final product is English. No idea why that is.