Prompted By Lost in Translation
6 comments. 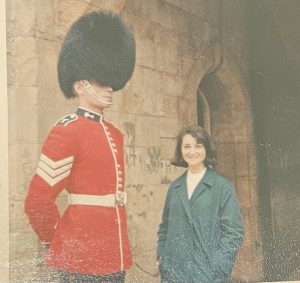 Europe on Five Memories A Day

But here we were, far from  home, fresh, excited and full of expectations.  Even the toilet paper was an adventure as we filed into our first English restroom. “Government Property” was printed on its waxy finish

Europe on $5.00 and a roll of American toilet tissue a day. Was there ever a better time in my life than the year  I had a Eurailpass! I treasure the memories of the freedom, the excitement  and the high spirits of that long-ago summer.

Did I appreciate it, or has the heaviness of adult responsibilities glamorized these memories?  It was to be my last summer before I started my first real job. I now realize that it was my last experience without money worries, occupational stresses and general adult anxieties (and my folks were paying for the adventure!)

I traveled with three good friends: Joan, who was my best childhood friend, Helaine, who became my best adult friend and Ann, a high school pal who now lives in California.  How bizarre we must have looked as we arrived in London.  Three of us had black raincoats because, it was thought they would “travel well”.   We looked like CIA operatives.

But here we were, far from  home, fresh, excited and full of expectations.  Even the toilet paper was an adventure as we filed into our first English restroom. “Government Property” was printed on its waxy finish.. (Did the Queen think someone would steal their awful paper which might be put to better use storing frankfurters?) I relaxed as I sipped my first cup of English tea and admired the lilting accents of rosy-cheeked children.

Every day was an adventure in high gear, from the restaurants, where I somehow got French nouns mixed up and ordered lambs brains, to the cafes where we had a memorable early dawn breakfast of cheesy onion soup in the Les Halles market.

Some days stand out more clearly.  Early in our trip, we found ourselves without a place to stay in Paris.  After hours of walking with heavy baggage, we finally found a room at the top of a six-story walkup in a rickety old hotel. “A real fire trap” I thought, trudging up the winding stairs.  As we were unpacking, I smelled something burning.  I found the concierge on a lower level and  pleaded with him to check out a fire,  but when he came up to our room, it was clear the he did not speak English. We desperately tried to annunciate the French word for fire, “feu”,  but he didn’t understand! We tried to pronounce the word in different ways: “feur”, “fuer”, “fur”, our voices getting louder and louder.  Finally, Ann yelled, “Let’s get out of here!” and the four of us, three in  black raincoats, came flying down the six flights of stairs at top speed.  Other guests looked at us like we had just been released from an asylum.  It turned out that this sleazy hotel had a particularly smelly furnace, and there was no “feu”.

Another vivid memory involved a different communication problem. Joan had an English friend Susan who lived in Stratford-upon-Avon.  Images of Shakespeare and charm called to us as we boarded the train from London.

Susan had very hospitable parents who put all four of us up for two days. Except having to take communal baths, because there was a hot water shortage, the accommodations were just what one would expect in the English countryside: flower-filled garden, a big Irish setter nestled next to the fireplace and 4 o’clock high tea in the drawing room.  But the thing I remember most was Susan’s 18-year-old brother Martin.  He was painfully quiet and shy, but who wouldn’t be with four loud American girls commandeering the house.  We overwhelmed him and couldn’t resist teasing him.  But our howls of laughter reached fever-pitched when Martin shyly asked us as we were going to bed, what time he should “knock us up in the morning!” When he learned the meaning of that phrase in American slang, he became practically catatonic.

6 Responses to Europe on 5 Memories a Day

Found in Conversation
by Marian