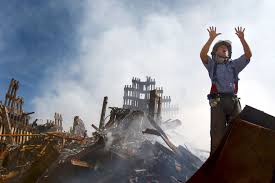 I hated the Trade Center towers. They went up while our movement came down — too tall, monolithic, ugly, twin monuments to Wall Street and American capitalism. I guess Osama bin Laden hated them, too.

How do you remember what you never forgot?

The phone rang at 7 a.m. and Eric’s girlfriend called from Greenwich Village and told us to turn on the television. Grumpy, we rose and gathered around the electronic hearth in time to watch the towers fall in a horrifying cacophony of sirens and screams and an unfathomable roar, one-by-one in interminable succession, the last-struck first, the first-struck last, according to the laws of physics.

We huddled all day and all night before the television, a large map of the Middle East spread on the kitchen table. Feverish, we clung to sanity by trying to understand the immeasurable, incomprehensible event we had witnessed.

the flaming horror provided the flim-flam to implement the Cheney hopscotch from Afghanistan to Iraq, a leap designed to destroy Saddam’s fragile, unified, secular nation and regain control of its oil;

the accidental success of Bin Laden’s attack led to the Bush Doctrine (America can launch preemptive attacks on any sovereign nation);

fostered the 2004 National Security Act and the Patriot Act leading to an unchallenged increase in domestic eavesdropping and metadata;

strengthened the precedent established in Korea and Vietnam to wage uncontained, undeclared war;

This list rolled off the top of my head. I could go on.

But the sadness, oh the sadness. Learning of lives lost, of illness descending on the brave and undeserving, families fragmented, fear exploited. And the rage, not just at Islamic terrorists, but at the sanctioned terrorism of U.S. government powerbrokers who picked up the ghosts of the fallen towers and ran with them. Time brings all history forward with it, like the chains of Marley’s ghost. Nothing forgotten, all recalled.

16 Responses to Ghosts of Fallen Towers

Booms, Dust, and Pathogens
by Marian