On Mr. Toad’s Ride, I was killed by a freight train. But Small World put me back together.

In 1967, about twenty classmates and I dropped LSD for the first time, on the bus to The Magic Kingdom. The little pills were called Blue Flats, pharmaceutical; word was they were made at UCLA. We were lucky, intent by chemists was as pure as the product.

By the time we got off the bus, reality ran parallel to reality and we switched from colors to sound to touch, merging senses and exclaiming, “Far out.” Something streaked overhead and I tasted orange blossoms. We headed for the rides. 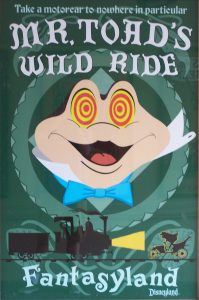 On Mr. Toad’s Ride, I was killed by a freight train; smattered, dead, bloody on the tracks, still screaming. But Small World put me back together, whole; loving characters singing to me. Pirates of the Caribbean started out as a cruise. But then one pirate started threatening me with a knife. I kept an eye on him, left an eye on him—even as the ride ended. Before I could walk away, I had to go back and get my eye. Not an easy task. Common sense, no bigger than a piece of lint, kept me off the Tea Cups. I hate circle rides. No telling what long-lasting malady might have resulted from spinning.

I fell in love and forgot. And fell in love again. I don’t remember with whom, but it was real while it lasted. Near sunrise, our group of travelers walked around like lost penguins, bumping into each other, reassured by what looked like familiar faces, beginning to look forward to a bus ride home.

Once you’ve taken LSD at Disneyland, you can never go back. To either one.