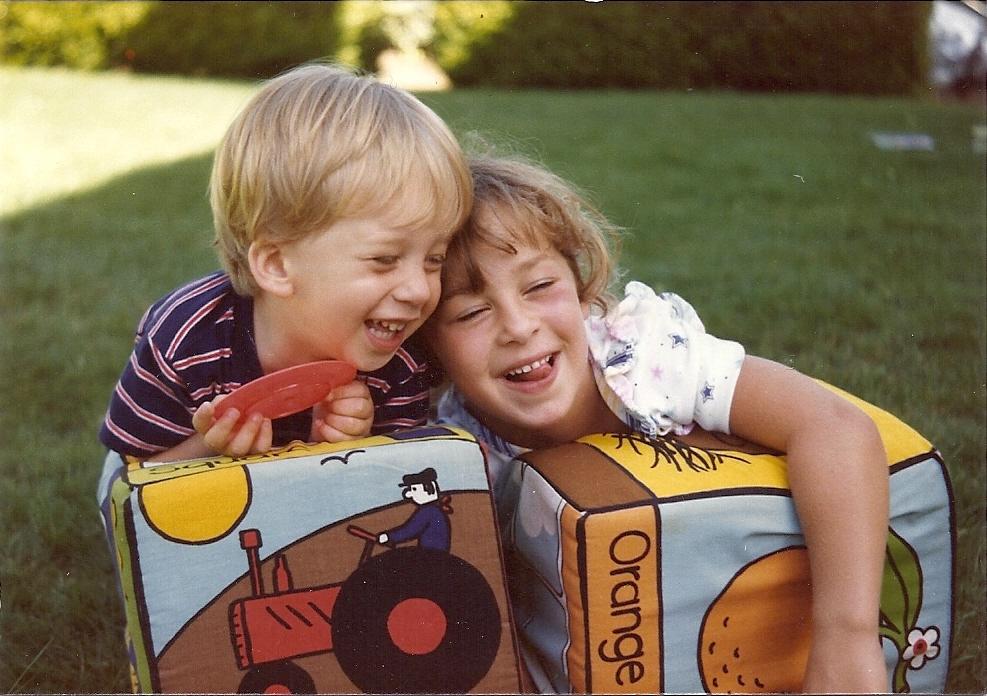 Parents, we’ve all had these moments, right? Right??

One day my daughter invited a friend from school over to play.  I’ll call this friend Jane, because that is her name.

Jane was eight or nine–a year older than my daughter–and since her mom and I were friends, the girls had spent time together before, sometimes in the company of both their little brothers. Usually the two moms would yuck it up over Rice Krispie treats and wine in the kitchen while the kids amused themselves in another room. Good times.

But on this day, the two girls played at our house after school. I didn’t hover, but I did listen in every now and again to make sure everything was going well.  The girls were giggling about something, when I heard the unmistakable sound of an unhappy kid. It was my son. It seems the girls were involved in some activity that not only didn’t include him, it involved his  being expelled from the play area.

I tried to get him interested in something else he could do by himself–he was three years younger, and while no longer a toddler, he wasn’t in their league by any stretch.  Distraction found. Crisis averted. Or so I thought.

After a few minutes of peaceful silence, I walked away.

Then I heard the sounds of  anguish from my little boy again. Now the girls had clearly crossed over into Mean Girl territory, with teasing, playing tricks and generally being obnoxious to my young son, who was trying to fight off tears in front of the girls.  My two kids (this was before the third one appeared) got along well, and my daughter had never bugged him like this  before. Even though she was older, they played together nicely and never  got into fights. (They will correct me if their memories differ, I’m sure.)

When it was just about time for Jane to go home, I walked her to the door and had a little one-sided chat with her.

“In this house, we don’t treat little brothers like that,” I said. “I’ve been to your house and I know you aren’t mean to your brother at home, and it’s not okay with me for you act that way when you’re a guest at our house.” She looked at me and didn’t say anything. “Jane, if you want to be invited back, you can’t behave like this. Understand?” She nodded, but I wasn’t convinced she had agreed to change her ways. She had a look in her eye that said, “Say whatever you like, lady. You’re not the boss of me.”

After Jane left that afternoon,  I gave my daughter an assignment: she was to write a one-page essay on the topic  “Why I Should Not Be Mean to My Little Brother.” I let her know that I expected her to do a good job and to take it seriously.

She dutifully wrote the essay and turned it in to me before dinner. I can’t remember if I made a few edits and handed it back, or if I just let it go with a check mark.

It’s something I would have kept, along with letters to the Tooth Fairy and other important family correspondence, but for the fire…

Looking back on it now, I have to laugh at the idea of assigning an essay to an eight-year old, but she thought about it, she wrote it, and when she had friends over after that, she didn’t make her brother miserable. I’m pretty sure about that.

Then there was the time my husband and I sent the older kids to summer camp for two weeks and took the youngest along with us to Hawaii.  (The  kids loved summer camp–they were happy to go. The “Hey, why didn’t we get to go to Hawaii?” issue came up much later.)

What my husband and I didn’t realize until the day before we dropped them at the departure point for camp and  waved a teary good-bye–is that we were scheduled to arrive home from Hawaii the day AFTER their session ended.  Luckily for us, a dear friend  volunteered to pick up our dusty kids along with his own, and keep them until we arrived home–tanned and rested from our vacation with their brother.

Will the kids ever let us forget that  scheduling snafu? What do you think?

Other great moments as a mom: those days I ended up stopping at 7-Eleven on my way home from campus (with both kids strapped in the back seat after I picked them up from daycare) to grab anything remotely nutritious for my daughter’s lunch when my  grad school classes ran late and I had to rush to get her to her afternoon kindergarten and hadn’t had time to make a sandwich for her.  She would be slurping the dregs from her juice box and polishing off the last peanut butter cracker when I screeched to a stop in front of my neighbor’s house. Her little girl and mine walked the last block to school together–and that kid would invariably be tapping her little Mary Janes and adjusting  her perfect hair bow as I brushed the crumbs off my daughter’s shirt and gave her pigtails a tug.

One more: My mom called on me for a number of things after my dad died. Some were mechanical, some were clerical, and some were computer related. One day she called and asked me to come over and do something with her clocks or her computer or whatever. I pleaded with my younger son, then around eleven or twelve, to come with me for company, backup and, frankly, to act as a buffer. He grudgingly agreed to tag along. When the task was taken care of, my mother suggested we all go out to lunch. My son looked at me. He did not want to be dragooned into  lunch with grandma. He stood his ground. While my mother went off to find her purse, I called him over to me. He geared up for the usual speech (“Sometimes we have to do things we don’t want to do because family, etc.), but instead I took a deep breath and said,

He seemed stunned, but recovered in time to offer his grandmother his arm as we headed out the door to the car.

Once we got to the restaurant and were seated, he began fidgeting with the salt and pepper and whatever else was on the table in front of him. I gave him a look, and slowly put my hand up to my shoulder, tucking in my thumb. Four fingers. He’d just lost a buck. From then on, he was a model of good restaurant behavior.

Our server came over later and told us that he’d seen a lot of kids in the place, but he’d never seen one with such good table manners. My mother beamed and tried to take credit. My son and I gave each other a smile…and a high five.

Of course, when my two older kids heard about this, they were incensed. “Hey! You never gave us five bucks!”

Kids, no one ever said life was fair.

6 Responses to Great Moments in Parenting

Childless with no regrets
by Marian